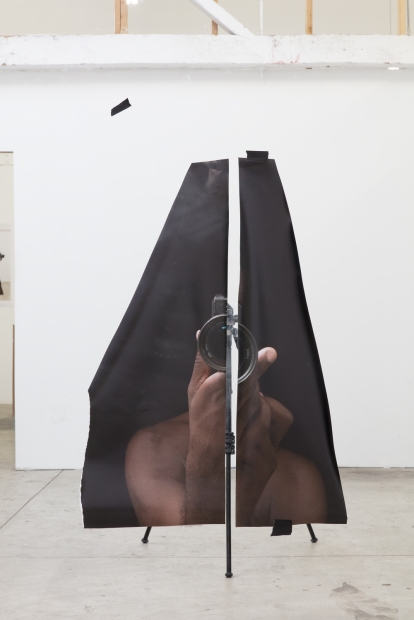 Los Angeles-based artist Paul Mpagi Sepuya is an emerging voice in photography. His studio practice combines formal rigor with socially conscious explorations of intimacy, queerness, and race in beguiling representations of the body and space.

Sepuya’s photographs—meticulously framed and often shot in mirror reflections—are collected into series, the titles of which reference the space of the photographic studio (i.e., Darkroom; Exposures; Figures; and Mirror Studies, among others). The photos themselves, however, channel the intimacy between the photographer and the sitter, as Sepuya poses his subjects—himself included—in physically or optically entangled arrangements. He regularly affixes printed photos, sliced or torn, onto mirrors that he then photographs, creating complex and confounding representational spaces. The crevices through which the body or device appear become metaphoric apertures for the homoerotic, the abstract, and interpersonal intimacy. In Mirror Study (0X5A7431), Sepuya has mounted two pieces of a sliced, printed photograph onto a mirror with black tape. The camera tripod—but not the camera—is visible in the mirror’s reflection, and Sepuya’s hands and camera lens—though not his head—are visible in the cut photograph. The mirror is an essential element of analog photography, allowing photographers to see their subjects as they would appear through the lens. Its externalization in Sepuya’s work highlights the materiality of photographic technology and underscores the psychological and metaphorical power of the mirror as a device for knowing the self and the world.

This work joins the ICA’s strong holdings in photography (particularly in the genre of portraiture and subgenre of self-portraiture), including works by Catherine Opie, Jimmy DeSana, and Cindy Sherman, as well as studio-based photographers such as Sara VanDerBeek and Leslie Hewitt.