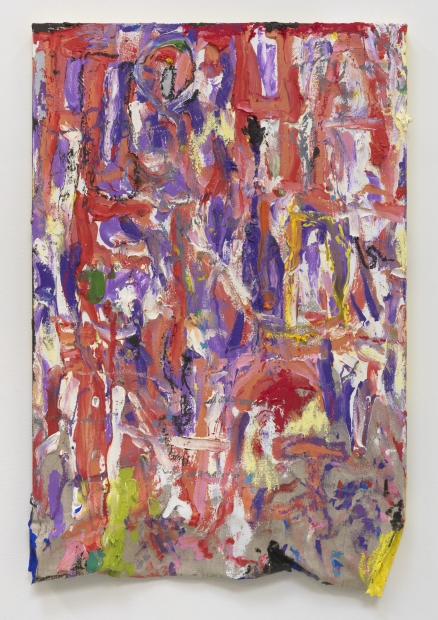 Pope.L is an artist and educator who over the past twenty-five years has made a career out of contraries. Drawing inspiration from the absurd and idiosyncratic nature of American culture, Pope.L’s provocative and often humorous performances, paintings, sculptures, drawings, photographs, and writings reveal and resound with the ironies inherent in our contemporary existence.

Although Pope.L is often categorized as a performance artist, his work in sculpture, video, drawing, photography, and painting evince an oeuvre that is universally prescient, poignant, and committed to highlighting political, social, cultural, and economic contradictions.

Part of a series of twenty-four oil-on-linen works, AKA Fuschia Ending buries text in a garish allover abstract expressionist composition. The series unites a misspelling of “fuchsia” with words offered by a rhyme generator, creating irreverent and nonsensical pairings such as “Fuschia Ebola,” “Fuschia Larva,” and “Fuschia Mañana.” Pope.L considers the repetition of the word “fuschia” as a performance taking place within the space of the canvas; each utterance of the word creates new meaning, as each pairing changes the way the viewer considers the visual landscape of the painting. In his own words: “Like performance, writing durates; an act of enduring; want to make it more physical, more ham-fisted lyrical—there are things to be done with words that have nothing to do with paint. It’s like crawling when you can walk …” Pope.L’s “mistreatment” of the word, along with the clumsiness of the mechanized pairings and the stridency of the palette, challenges what is considered “good” taste and thus subtly undermines the dominant power structures that sustain and propagate it.

Inhabiting the realm of various disciplines at once, Fuschia Ending joins comparable works by Charline von Heyl, Dana Schutz, and Amy Sillman in the ICA/Boston’s strong holdings in paintings, as well as text-based works such as those by Roni Horn, Kerry James Marshall, and Lorna Simpson.