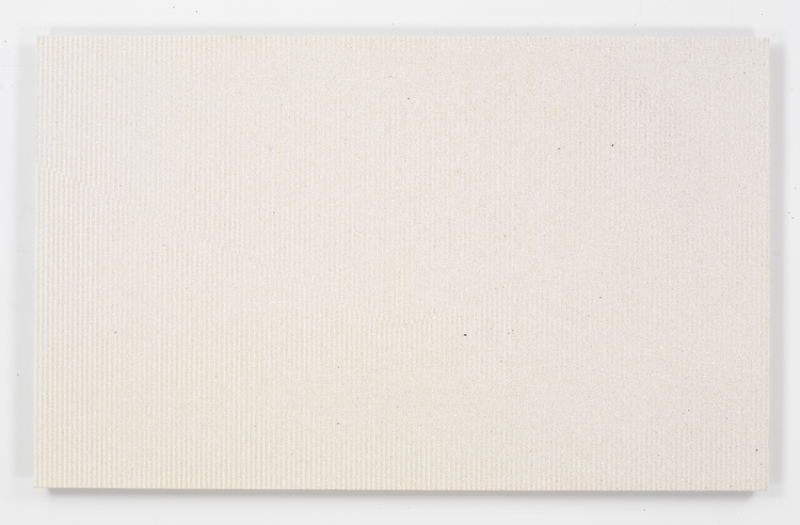 R. H. Quaytman grew up in a family of artists. Although she came of age in an era when painting was considered suspect, generally eclipsed by video, performance, and minimalist sculpture, Quaytman’s pursuit of the medium has been passionate and unswerving since the late 1980s and early ’90s. As a young artist, she began a reconsideration of painterly perspective and the use of photography in painting. She sees three important organizational elements in her paintings: their physical aspect, their subject matter, and their relationship with viewers passing in front of and by them.

Exhibition Guide, Chapter 15 [white diamond dust arrow pattern] is a signature work by Quaytman. It has a strong physical presence, intensified by the diamond dust that covers its surface to create a seductive, sparkling galaxy, while frustrating attempts by the eye or mind to formulate a single vision or interpretation of the work as a whole. This is characteristic of Quaytman’s paintings, whether featuring optical illusions, fluorescent color, or light sources captured by photography—light sources that often, paradoxically, create blind spots. The subject matter, in this case the image of an arrow, is closely tied to her interest in the viewer’s relation to the work as well as to the context in which the work is encountered. Quaytman frequently uses the arrow for its strong visual draw, both attracting the viewer’s attention and directing it beyond the painting. Exhibition Guide, Chapter 15 [white diamond dust arrow pattern] also has a special significance in relation to the ICA/Boston, as the arrow in this painting references an archival image Quaytman came across at the museum: the photograph documents a 1965 ICA exhibition that included an op art painting of an arrow, attributed in the archive to an artist identified as “T. Priest.”

In 2009, the ICA hosted Quaytman’s first solo museum exhibition; the acquisition of Exhibition Guide, Chapter 15 [white diamond dust arrow pattern] thus marks the museum’s early interest in this important contemporary artist. In her mobilization of significant visual attention through minimal means, Quaytman enters into dialogue with Taylor Davis and Tara Donovan, both represented in the collection.