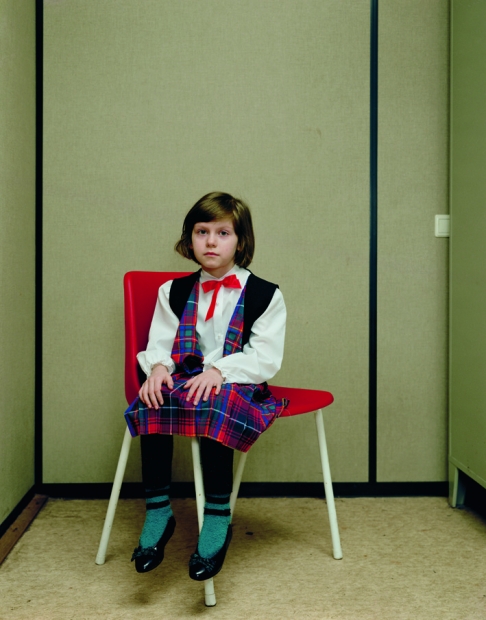 Rineke Dijkstra’s work offers a contemporary take on the genre of portraiture. Often photographing in an objective documentary style, Dijkstra captures her subjects in states of transition: boys becoming soldiers, new mothers, or girls growing up. As the artist stated, “I’m interested in young people because they’re not fully developed. You can only guess which direction they will go. They’re open, an open book, really. And I think that interested me because it is also sort of an abstraction. You can look at [young people] and really project your own feelings and thoughts.” A photograph, by its nature, presents a past moment, and Dijkstra’s portraits lie at the threshold of activity, either after or before an event transpires. The setting is typically devoid of extraneous details, highlighting only the evocative nature of a person’s facial and bodily expression.

The subject here, Almerisa, was six when Dijkstra first photographed her in 1994 at a refugee asylum in Leiden, Netherlands. The ongoing portfolio that emerged records Almerisa’s transformation from a young girl from the former Yugoslavia to a woman, now a mother, from Western Europe. Dijkstra’s compositions maintain a spare and consistent format (frontal symmetrrical, seated pose, blank background), accentuating the changes, both physiological and cultural, in Almerisa’s appearance over time. A time-lapse portrait of identity in formation, the photographs also record a broader social context of war-wrought displacement and hybrid belonging. Using a 4 x 5 view camera and an unusually long exposure time, the artist’s technique allows for a quality of detail not often seen in the digital age. Almerisa locks her eyes with the camera lens, as though studying the portraitist and by extension the viewer, summoning a reciprocal gaze.

The ICA/Boston presented the first solo museum exhibition of Dijkstra’s work and has built a strong collection of her photographs. These eleven prints from the Almerisa series join other photographic portraits by such artists as Philip-Lorca diCorcia, Nan Goldin, and Catherine Opie.