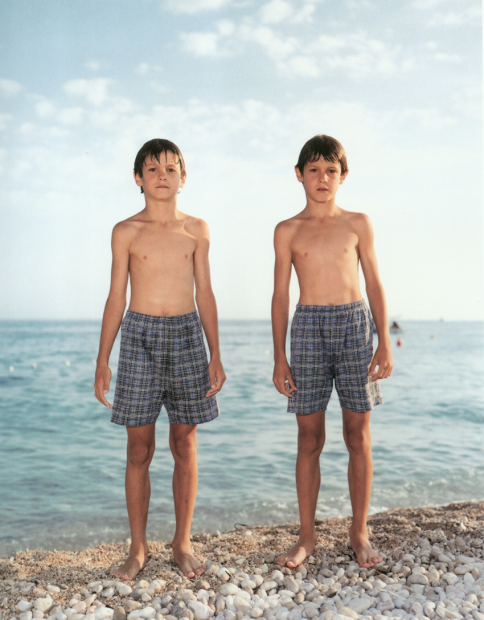 Dutch artist Rineke Dijkstra’s work presents a contemporary take on the portrait. The temporality of photography is essential in Dijkstra’s work. The artist sensitively captures her subjects in states of significant transition: adolescents on the beach, newly enlisted young adults, and mothers with their newborns or infants. A photograph presents a past moment, and Dijkstra’s portraits lie at the threshold of activity, either before or after an event transpires. The setting is typically devoid of extraneous details, highlighting only the evocative nature of the subject’s facial and bodily expressions.

Dubrovnik, Croatia, July 13, 1996 is part of a series of twenty portraits that document the innocence and awkwardness of adolescence. Taken across Europe and the East Coast of the United States, the images are titled with location and date without reference to the subject’s name. Dubrovnik, Croatia, July 13, 1996 depicts two young boys, presumably brothers, wearing seemingly indistinguishable bathing suits. Beyond slight differences in the way the boys hold their arms, their stances are nearly identical. This image draws upon the rich tradition of images of bathers in art history.

This photograph expands the ICA/Boston’s holdings of work by Rineke Dijkstra, one of the most influential photographers working today, and registers the museum’s early support of the artist in 2001, when the ICA organized her first museum survey. It joins a strong collection of artwork that addresses identity and the human form.