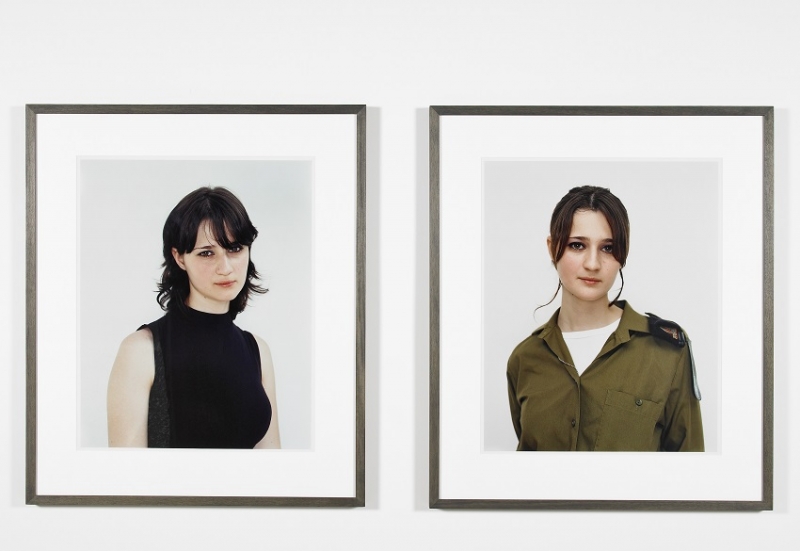 Rineke Dijkstra’s apparently straightforward portraits divulge her perceptions of her sitters through the smallest details and subtlest facial expressions. She is concerned with balancing her subjects’ deliberate self-presentation with their unwitting self-revelation.

In 1998, in connection with an upcoming exhibition at the Herzliya Museum of Art in Israel, Dijkstra undertook a new body of work in which she recorded young men and women who had joined the Israeli army. She took photographs of the men after a shooting exercise and the women on their first day of enlistment. Since then, Dijkstra has returned to Israel frequently to follow some of these original sitters and to document new recruits.

These two photographs of “Evgenya” were taken in 2003—the first on the day she was inducted, still in civilian clothes, and the second eight months later, in uniform. With this knowledge, we search Evgenya’s face, clothing, even hairstyle for clues as to if (and how) military service has transformed this striking young woman. Does she look fearful or apprehensive on her first day? Does she seem more confident in uniform? We might expect Evgenya’s fatigues to dampen her individuality, yet even in an army uniform her assertive self-expression is evident in her dark eyeliner, wispy bangs, and sure gaze.

This photograph exemplifies Dijkstra’s ability to capture the complexity of an individual through multiple images and social and political frames. The ICA/Boston made an early commitment to this artist, organizing one of her first U.S. museum exhibitions in 2001. This commitment was reinforced by the acquisition of this work, the first by Dijkstra to enter the collection.