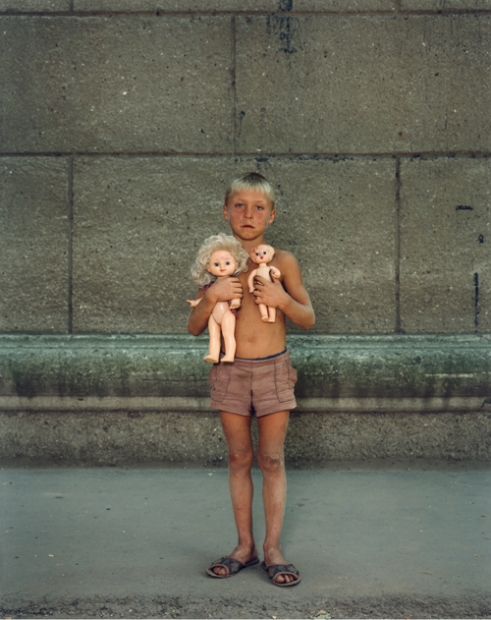 Since 2001, when the ICA/Boston organized one of her first solo museum shows in the United States, Rineke Dijkstra has become known for her incisively direct photographic and video portraits of individuals in the midst of change. Through series like The Bathers, showing awkward adolescents in swimsuits, New Mothers, documenting women minutes after giving birth, and others recording military recruits on their first day of induction and child refugees newly displaced, she exposes subjects at moments that capture the poignancy of their transition and transformation. To suggest both the self-conscious and the unconscious self, Dijkstra concentrates on gazes, poses, and gestures that project an uncertain mix of confidence and vulnerability.

Exemplifying Dijkstra’s subtly revealing portraiture, Odessa, Ukraine, August 11, 1993 presents a young boy in shorts and sandals who clutches two unclothed dolls to his bare chest. Standing in front of an urban stone wall, he is smeared and dusted with street dirt, his tan skin offset by the dolls’ pale pink bodies: their pert plastic smiles and bright eyes call attention to his comparatively stone-faced expression. Juxtaposing the childhood joy implied by the toys with a premature resignation glimpsed in her subject, Dijkstra hints at the fragility of hope, the fleetingness of youth, and an innocence soon to be lost.

Odessa, Ukraine, August 11, 1993 is an early work by Dijkstra that joins a number of other photographs in the ICA/Boston collection, rounding out the museum’s holdings of this seminal contemporary photographer’s work.