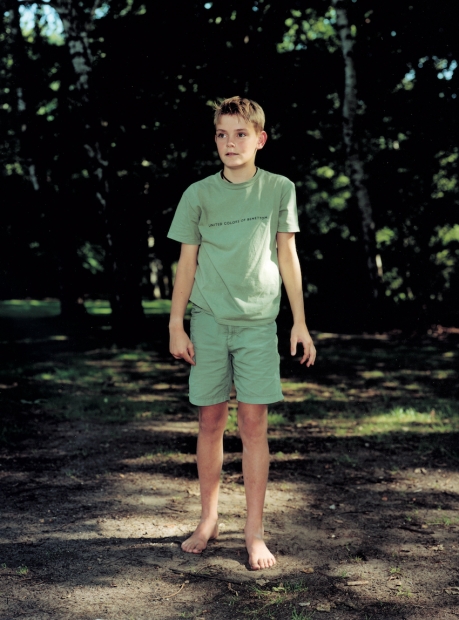 Rineke Dijkstra is best known for her striking and intimate portraits and videos of young people. Shooting her subjects frontally, she often presents individuals in moments of transition—women after childbirth, newly displaced child refugees, and young military recruits—and focuses on the evocativeness of the subject’s expression, pose, or gesture.

Trained at the Gerrit Rietveld Academie in Amsterdam from 1981 to 1986, the artist continues to live in the city. She began the series of which this work forms a part during a residency at the German Academic Exchanges Service’s (DAAD) Artists-in-Residence program. For the series, the artist photographed adolescents in Tiergarten, one of the most popular parks in Berlin, as well as in a park in Lithuania. Tiergarten, Berlin, August 13, 2000 exemplifies the tenuous biographical moments Dijkstra is celebrated for capturing. The boy seems apprehensive: his shoulders are raised and he gazes sideways at something outside the frame. The artist works with a large-format camera, which requires a long exposure during which her sitters must maintain their pose, which may explain to a degree the subject’s awkward stance. By titling the work with the name of the locale rather than the boy, Dijkstra shifts attention away from his individuality, locating his experience, like that of so many his age, in the unsettling moment somewhere between the knowable present and the unpredictable future.

This photograph add to the ICA/Boston’s strong collection of works by Dijkstra, and joins other documentary-style photographs and portraits in the collection by such artists as Roe Ethridge, Nan Goldin, Catherine Opie, and Collier Schorr.

Gift of Camilo Alvarez and Alexandra Cherubini, and Steve Corkin and Dan Maddalena