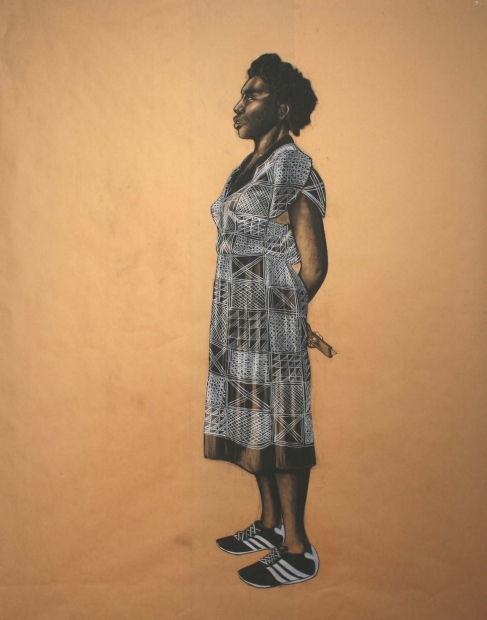 Robert Pruitt creates sculpture, drawings, video, and installation works about the African-American experience in the United States and the global impact of black cultural production. He is perhaps best-known for large-scale, multimedia drawings on paper featuring portraits of African-Americans. His careful and sensitive treatment of the subjects—from their features to dress and comportment—combines with a wide array of references to traditional cultures, hip-hop music, science, technology, and political struggles. Pruitt describes his work as attempting “to string together the breadth of the black experience and diaspora to create a sense of commonality and humanity … lacking in many forms of black representation.”

Woman with X-Patterned Dress (After Bill Traylor) features a female figure standing in profile, her arms behind her back, and her feet slightly apart. Everything about the woman conveys a sense of strength and resolve—from her grounded stance to the sharp outlines of her face. One quickly notices that behind her back she clasps a box cutter, razor extended. This disarming detail imbues the portrait with a sense of pending violence. Pruitt used black crayon on brown butcher paper, allowing the paper to provide the underlying hue of the figure’s skin. The figure’s clothing is quite distinctive: a highly patterned, quilt-like dress combined with a pair of sneakers, both drawn in high contrast white crayon against black. The artwork’s title makes reference to Bill Traylor, a celebrated, prolific, and self-taught African-American artist who first began to draw at the age of eighty-five in 1939. Pruitt’s interest in Traylor speaks to his interest in diverse African-American histories as a means of forming new representations of black experience.

This work builds on the ICA/Boston’s already strong collection of portraiture and interest in racial diversity. Pruitt’s work invites productive dialogue with works by other artists who address identity and narrative, including LaToya Ruby Frazier, Cindy Sherman, and Kara Walker.

Gift of Kimberly and James Pallotta