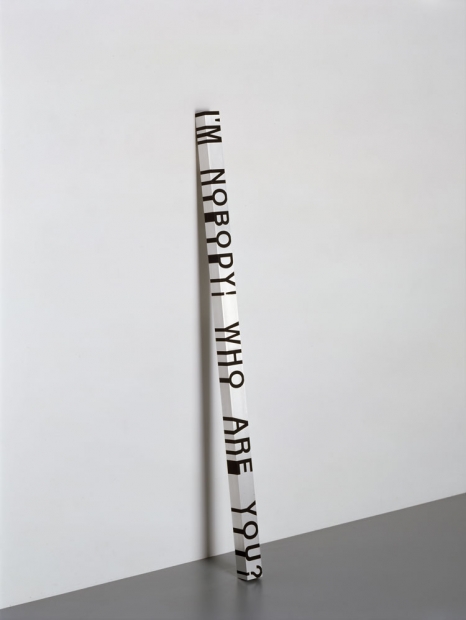 Working in sculpture, drawing, photography, and site-specific installation, Roni Horn explores the very nature of art, especially as it relates to site, environment, and identity. In an interview on Art21, Horn describes the importance of words to her process: “I move through language to arrive at the visual.” From this conceptual basis, she crafts objects and arrangements that often implicate the viewer, either through spatial structures or direct address. Frequently aligned with the aesthetics of minimalism, Horn uses repetition and doubling to invite viewers to look closely and to discover the subtle differences that constitute the world. Through her artistic practice, she seeks to activate the space between the perceptible and imperceptible. Since the 1980s, she has frequently visited Iceland, finding inspiration in its remarkable landscape and relative isolation.

Key and Cue, No. 288 forms part of a body of text-based sculpture that Horn began in the 1990s. In this work, an aluminum bar propped against the wall draws attention to the supports of both floor and wall. Having more than one face, the sculpture refuses to be seen or known all at once. From one vantage point, an abstract pattern of black lines resembles a barcode. From another, these embedded plastic bands cohere into a line of text, an extract from poem 288 by Emily Dickinson, whose writing has had a strong influence on Horn. As the viewer shifts from seeing to reading, the line of text, a statement and question—“I’m Nobody! Who Are You?”—moves the viewer beyond the physical object into a space of introspection.

Key and Cue, No. 288 adds to the ICA/Boston sculpture collection, especially works that engage with seriality, such as examples by Tara Donovan, Sheila Hicks, Charles LeDray, Josiah McElheny, and Andrew Witkin.