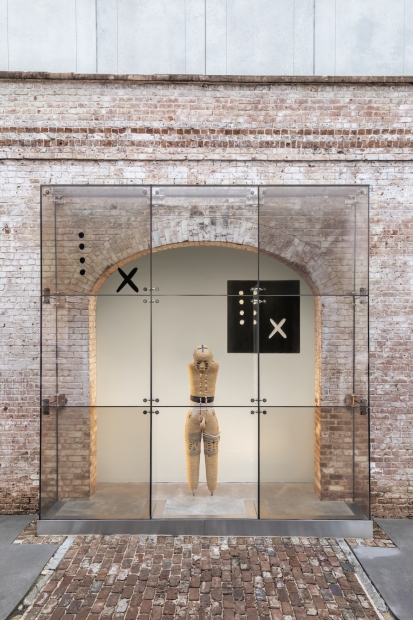 Rose B. Simpson’s artistic practice spans ceramic sculpture, metals, performance, installation, writing, and automobile design, offering evocative reflections on the human condition. Her figurative ceramic sculptures, for which she is best known, often include metal, wood, leather, fabric, and found objects, and they express complex psychological states, spirituality, women’s strength, and postapocalyptic visions of the world. The daughter of sculptor Roxanne Swentzell, to whom she apprenticed, Simpson calls forth Indigenous knowledge and curative aspects of working with clay so as to heal generational trauma, and foster an internalized notion of sustainability. An enrolled member of the Pueblo of Santa Clara, New Mexico (Khaap’o Owingeh), Simpson draws on processes of producing clay pottery in practice since the sixth century and distinct methods of firing and formation, connecting tradition and knowledge with her own place in the world.

Countdown III was part of a major commission of new works for the Savannah College of Art and Design at Atlanta, Georgia. The sculpture extends the artist’s signature treatment of the human figure, with its tactile, heavily worked ceramic surface to a totemic scale. Adorned with leather, string, and a long necklace of ceramic beads, the standing and armless torso faces a wall upon which its head rests, a pose freighted with emotional intensity. The ceramic head and body are held upright by a metal armature visible in the elongated neck and pointed metallic feet the sculpture balances on. Originally installed in a row of glass windows, the series title, Countdown, connects the notion of seriality with our present time, prompting reflection on accumulation, anticipation, renewal, and uncertainty regarding the future. Captivating and yet unsettling, Countdown III is a tremendous example of how Simpson creatively taps into urgent concerns with deep wisdom and self-awareness, advancing her effort at “building awareness around the energy of colonization, around indigenous culture, bodies, and place.”

Acquired through the generosity of Bridgitt and Bruce Evans