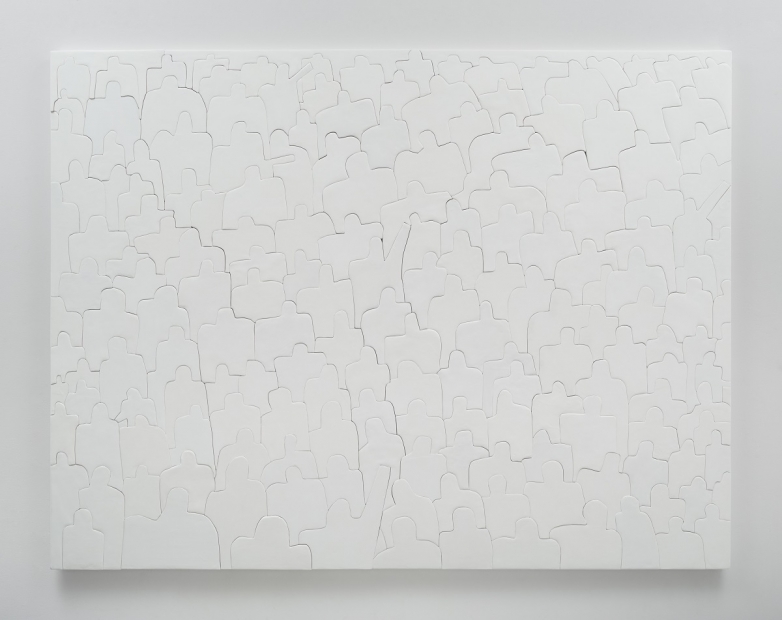 Sadie Benning has been an important and original voice in the worlds of contemporary art, film, and music since the 1990s. Benning first came to prominence from their PixelVision videos, made on an early, toy version of a digital video camera. Raw, formally innovative, and autobiographical, these videos, shot in the intimate space of the artist’s bedroom, were confessional works that explored identity. In the early 2000s, Benning turned to painting and drawing, creating geometric abstractions that contained explicit and implicit references to the body and coupling.

Crowd, drawn from an image of an audience at a rock concert, presents ghostly white figures amassed together in a collective following. Benning makes individual pieces separate and then assembles the composition like a jigsaw puzzle—a process that points to the individuals that constitute a crowd. The artist covers each wooden piece with aqua resin, a water-based sculpting material, to give it a dimensional presence and then uses casein, a medium made from milk protein, to create a lustrous and smooth surface. While the white surface of Crowd appears to homogenize the image, its uniformity is interrupted by the glow of acid greens and pinks that Benning has applied to the edges of the figures, which gives them dimension.

Crowd joins other paintings in the ICA/Boston’ s collection that engage material experimentation and questions of identity by Amy Sillman, Alice Neel, and Joan Semmel, as well as works by Eva Hesse, Ana Mendieta, and Taylor Davis that abstract recognizable scenes to probe subjective experience.