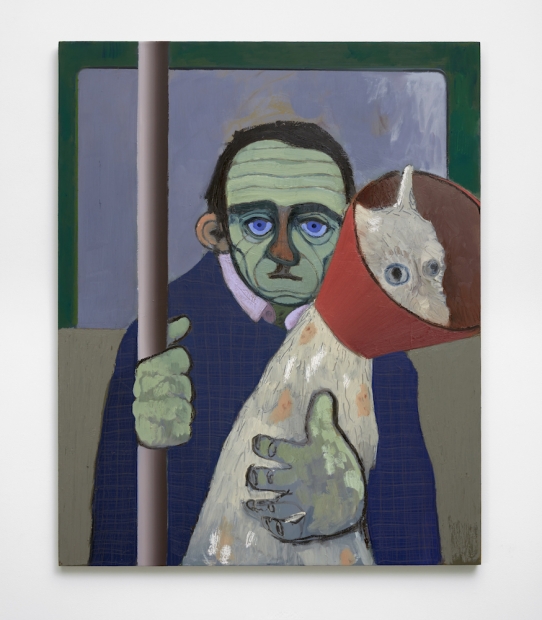 Sanya Kantarovsky creates humorous and wistful paintings—from surreal portraits to abstract compositions—that are infused with social commentary. Incorporating memories of his childhood in Moscow and cultural references, Kantarovsky often uses the language of cartoons. Born in 1982, Kantarovsky received his M.F.A. from the University of California, Los Angeles, and B.F.A. from the Rhode Island School of Design. This young, New York-based Russian artist works through figuration to arrive at paintings full of uncertainty and emotional energy.

Exemplary of the artist’s work, Violet pictures a man holding a dog and clutching a train pole. The man looks worn and sullen with a deeply creased brow, and the dog wears a red cone around its neck, perhaps following a recent medical procedure. Kantarovsky places the figures in a subway train; the window and strong rectangular shapes underscore the contained environment. While the canvas appears to capture a moment in time, the narrative and context are distinctly obscure. As Kantarovsky has said about his work, “it’s like a moment that never existed but that you feel you’ve seen before.” The artist employs a surreal, almost fauvist coloration, seen in the pale green face and hands, and in the bright red of the dog’s cone. This work was first presented as part of a 2016 exhibition titled Feral Neighbours about the concepts of privacy, impersonality, and anonymity of urban living.