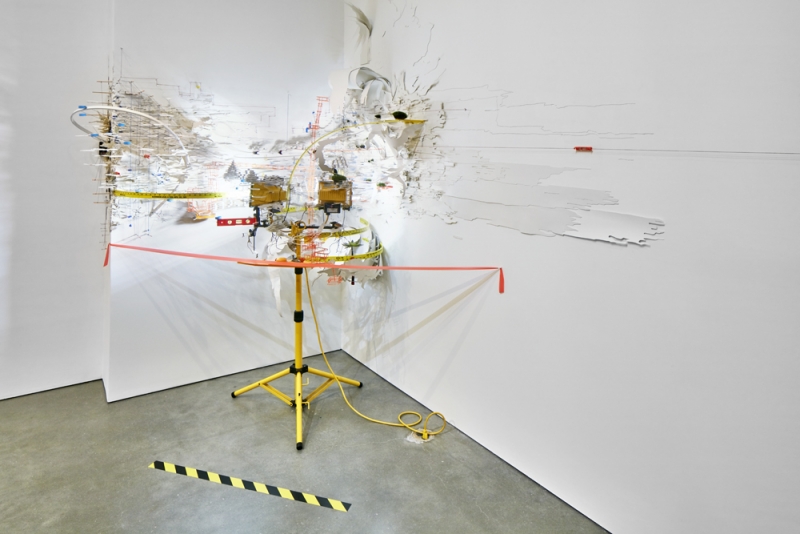 Sarah Sze uses everyday materials such as paper cups, tape, string, and plants to create ambitious, site-specific sculptures and installations that take on the character of landscapes, architecture, constellations, and improvisational systems. An important contemporary artist redefining the boundaries of sculpture, Sze begins with a close consideration of her physical encounter with a particular site and then launches into an exploratory process involving drawing, collecting, building, testing, and often complex engineering. Her artworks frequently fill entire rooms and in some cases even penetrate such barriers as walls and windows to defy architectural space. Born in Boston, Sze represented the United States at the fifty-fifth Venice Biennale in 2013.

Sze was commissioned to create Hidden Relief by the Asia Society in New York. The work, sited in the corner of the gallery behind a strip of caution tape, appears to be at once a freestanding sculpture and part of the wall. Layers of paint peel away from the wall, and orange scaffolding and curving yellow rulers pierce the geological white forms. Sze uses a simple palette of white, orange, yellow, blue, and black throughout the work, which is brightly illuminated by floodlights that are part of the sculpture. On the walls, Sze has drawn diagram-like lines, using pins and string as if plotting the next move. Hidden Relief conveys a mesmerizing impression of movement, in which balance is constantly negotiated, questioned, and affirmed. The work reflects Sze’s acute attention to detail as well as her ingenious use and transformation of existing architecture.

The acquisition of Hidden Relief brings an important artist with Boston roots into the ICA/Boston’s collection and greatly enhances the museum’s holdings of large-scale works. Sze’s strategies of appropriation and transformation of the mundane correlate with the practices of such collection artists as Cady Noland, Mona Hatoum, and Rachel Harrison.

Gift of Nancy and Stanley Singer