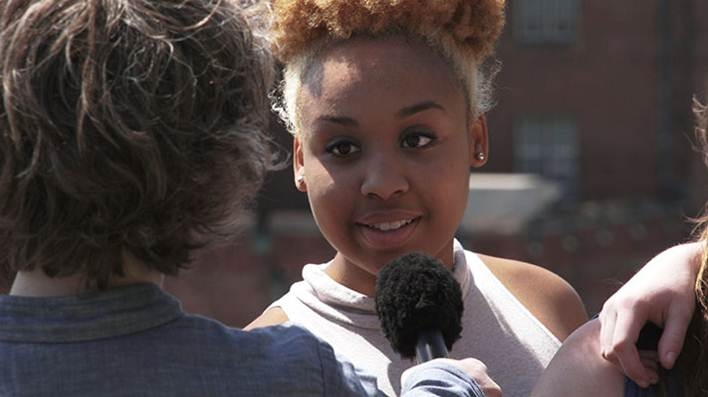 Through performances and multimedia installations, Sharon Hayes investigates how speech—both public and private—transects with politics, history, personal identity, desire, and love. By appropriating the tools of twentieth-century protest and demonstration, she reconfigures the images of the protestor in a manner that destabilizes the viewer’s expectations, exposes the possibilities and challenges of reviving past models of protest, and highlights the friction between collective activities and personal actions.

Ricerche: three is the first in a series of works that will carry the title Ricerche. In Ricerche: three, Hayes interviews 35 students at Mount Holyoke College, a women’s college in western Massachusetts, about issues surrounding sex, sexuality, and gender. As the interview unfolds, the camera alternates between a focus on the group and on Hayes with specific interviewees. This provides a unique dual portrait of the student body and of individual students, a distinction that grows as the conversation becomes more heated and individual identities become more prominent. By investigating students at a women’s college, Hayes addresses individual and collective issues surrounding gender-segregated institutions, including the perception that women’s colleges are a hotbed of lesbian culture and the community’s responsibility to accommodate students who change their gender after enrollment. Ricerche: three is inspired by Pier Paolo Pasolini’s 1963 film Comizi d’amore, in which Pasolini investigates Italy’s postwar cultural attitudes toward sex by asking Italians—young and old—to speak in detail about various issues: childbirth, virginity, homosexuality, divorce, and prostitution. His questioning and his manner are intrusive, judgmental, and at times confrontational. Hayes uses Pasolini’s film as a model for a contemporary inquiry into the issues around sexual identity in the United States today.

This important work adds to the diversity of the ICA/Boston’s growing collection of video, including works by Kader Attia, Paul Chan, Christian Jankowski, and Mika Rottenberg. Ricerche: three also contributes to the ICA’s collection of photographs that examine individual and collective identity by artists such as Rineke Dijkstra, Nan Goldin, Ragnar Kjartansson, and Catherine Opie, who similarly challenge long-held assumptions about sex, gender, and sexuality.

Gift of VIA Art Fund, Inc./Gift of Outset Contemporary Art Fund USA, Inc., as part of The International Production Fund