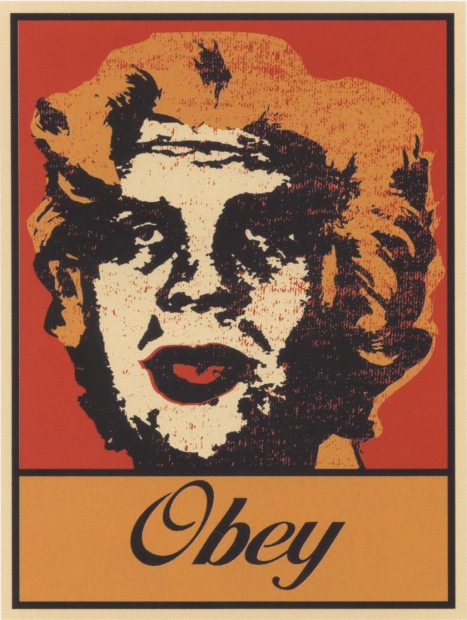 Shepard Fairey is one of the most prolific and influential street artists working today. Fairey first became known for creating a stencil of the face of wrestler André the Giant that he spray-painted and wheat-pasted on public surfaces in major cities internationally. He later parlayed his reputation as a street artist into art-world recognition—his first solo museum survey, Shepard Fairey: Supply and Demand, was held at the ICA/Boston in 2009, and his widely circulated portrait of Barack Obama, used in the 2008 presidential campaign, has been acquired by the National Portrait Gallery in Washington, D.C.

Marilyn Warhol is one of a set of twenty-one prints inspired by a ninety-print grid that was included in Fairey’s exhibition at the ICA. Together these prints demonstrate the scope of his artistic vocabulary, largely based on the legacy of agitprop, and sources of inspiration, taken from the realms of politics, fine art, and popular culture. For Marilyn Warhol, Fairey replaces the face of Marilyn Monroe as it appears in one of Andy Warhol’s iconic paintings with that of André the Giant, conflating the two visages above Fairey’s well-known tagline “Obey.” Here, Fairey demonstrates that he can manipulate a signature image by any artist for his own purposes, adding a complex layer to the history of appropriation art and the conversation about image ownership.

This suite of twenty-one prints by the artist in the ICA’s collection offers a dynamic representation of the artist’s creative output over the last twenty years. Marilyn Warhol, in particular, is in dialogue with other works in the collection that instrumentalize found images, such as those by Vija Celmins, Thomas Ruff, Kelley Walker, and Andy Warhol.

Acquired through the generosity of Beth and Anthony Terrana, Sandra and Gerald S. Fineberg, Fotene Demoulas, and the artist.