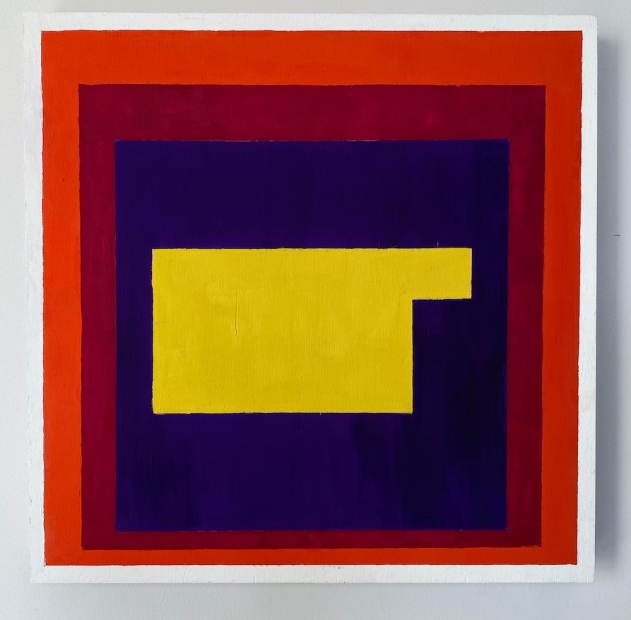 Homage to the Auction Block #15

Steve Locke has established himself as a critical artistic voice in the representation of race and visual culture. Versed in the mediums of painting, drawing, installation, and sculpture, Locke examines subjects of race, sexuality, gender, and history, with a focus on cultural discussions of masculinity.

A notable departure from his more renowned portraiture and figurative paintings, and responding to Josef Albers’s series Homage to the Square in particular, Locke’s Homage to the Auction Block #15 is part of a series of paintings Locke created to challenge modernist forms and their assumed neutrality. Like Albers’s series, Locke’s paintings focus on the concentric meeting of line, color, and shape. Unlike Albers, Locke substitutes the visual search for the square with another form. Here, encased within a painted purple square within a burgundy square within a red square, is a yellow rectangle-like shape—Locke’s auction block motif. This cross-section schematic of the auction block, the public site where enslaved persons were sold as property, becomes the organizing principle around which the painting is structured. By placing the auction block at the core of his composition, Locke connects the history of chattel slavery and the slave trade with the origin of global capitalism and the invention of race and racial hierarchies. As Locke explains: “The use of the ‘auction block’ motif literally organizes these modernist relations around the central symbol of chattel slavery in the Americas. The work reframes the work of modernism around the shape that made it possible.” This significant body of work continues Locke’s interest in contending with the form of the auction block and its visual history, as well as its influence in cultural memory.

Acquired through the generosity of James and Audrey Foster