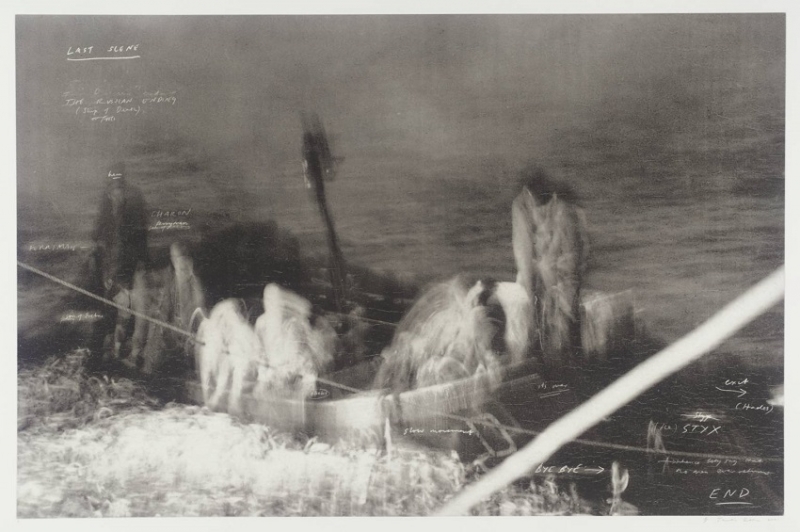 Tacita Dean’s explorations of the relationship between analogue media and the vicissitudes of time, history, and our natural world have made her one of the most influential artists of her generation. Film, photography, and drawing form the foundation of her practice, and in each instance the chosen medium amplifies her themes. At its heart, Dean’s work is grounded in the material, temporal, and associative qualities of 16mm film. In poetic works that luxuriate in slowness, concentration, and the soft colors and tones of film stock, she approaches iconic architecture, portraits of artists for whom time and movement are critical components of their work (Merce Cunningham, for instance), and the manufacture of film stock itself. Interspersed with these occasionally monumental pieces (she pioneered an almost three-story film projection in Tate Modern’s Turbine Hall) are lyrical series of photographs, drawings, and prints that mine the historical presentation of place and history.

Dean’s The Russian Ending is a series of prints that depict the aftermath of an unspecified disaster. Explosions, shipwrecks, funerals, despoiled landscapes, and ambiguous events are annotated by the artist, suggesting possible scenarios. The series takes its title and theme from a tradition in early twentieth-century film production in Denmark (then a major generator of films) in which alternate endings for films bound for U.S. or Russian markets were offered. While the U.S. received films with happy endings, Russia received films that ended in disaster—one conclusion for the land of Disney and an entirely different one for the land of Dostoyevsky. In Dean’s series, the effects of industry, mechanized labor, and war play are rendered in deep, atmospheric tones, underscoring their ambiguity and suggesting history’s inherent subjectivity. The wry title both conjures the last century’s forking path of shared experience for the U.S. and Russia, and announces the end of the Soviet Union.

The Russian Ending is in dialogue with many works in the ICA/Boston collection. It makes an intriguing pair with Boris Mikhailov’s sardonic, sometimes bleak depictions of Ukrainian citizens, but also connects with serial investigations into the subjectivity of identity by artists such as LaToya Ruby Frazier and Cindy Sherman. The representation of war, conflict, and trauma are recurring themes in the works in the collection, ranging from Doris Salcedo’s poetic sculpture to Trevor Paglen’s depictions of twenty-first-century war.

Gift of Anne and Arthur Goldstein