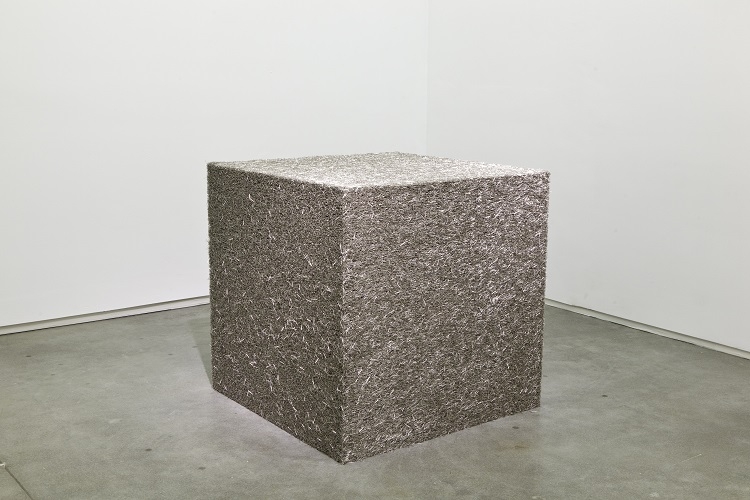 Tara Donovan transforms everyday materials into formally elegant sculptures, installations, and works on paper. She has made works from massive accumulations of pins, straws, toothpicks, tarpaper, tape, buttons, paper plates, and pencils. The means by which Donovan manipulates these objects are often simple—ripping, stacking, twisting, piling, cutting, grouping—yet the results are spectacular. The artist begins by testing and experimenting with a given material, seeking to remain true to its inherent properties while pushing its capacities. As Donovan has said, “Every new material comes with a specific repetitive action that builds the work.” Colored buttons form rippling towers that recall sea coral, or three million cups are stacked to form an undulating topographic map. When viewers discover what Donovan’s works are made of, they are surprised and delighted by how something so familiar and ordinary can become so unexpected and new.

Untitled (Pins), made of many thousands of straight pins, is a perfect cube reminiscent of the work of minimalists like Donald Judd. Rather than following the minimalist strategy of industrial fabrication, however, Donovan herself poured and pressed the pins into a four-sided square mold. When she removed the sides, the pins created a cube shape bound together by nothing more than surface tension: rather than holding fabric in place, the pins hold only themselves. As in much of her work, light plays off the cube, making it glitter enticingly. For all its prickliness, it begs to be touched. Yet, unlike Carl Andre’s relatively indestructible floor pieces or Judd’s cubes, Untitled (Pins) is fragile, on the brink of falling apart at the slightest touch. Far from tragic, it betrays a sense of humor and humility.

When the ICA/Boston organized survey of Donovan’s work in 2008, this work particularly aroused the affection of viewers. Untitled (Pins) complements the ICA’s Cornelia Parker pieces, as both artists reanimate the overlooked and mundane to create works of striking beauty. 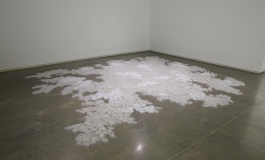 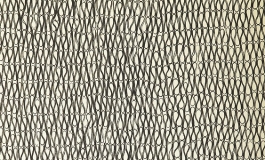