The ICA will reopen to the public on July 16 and for Member Appreciation Days on July 14 +15. Learn more about our new safety protocol and visitor guidelines or what visitors need to know before they arrive. 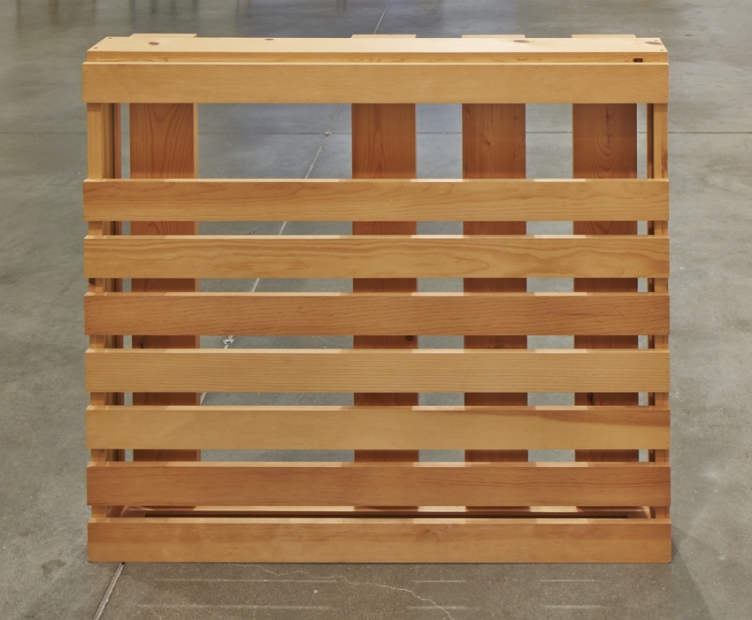 Through her sculptural work, Taylor Davis explores the relationship between object and viewer through precise manipulations of form. Her work, often made of wood and industrial materials, investigates issues of orientation, space, identity, and perception. Taylor Davis is a long-time and critically acclaimed member of the Boston arts community and has taught at Massachusetts College of Art and Design since 1999.

In Untitled, 2001, Davis draws inspiration from vernacular objects and architecture. The work evokes such structures as a wooden pallet turned on its end, a garden gate, or a pen for livestock. Seen from a distance these associations compete with the sculpture’s abstract grid of horizontals and verticals, which oscillate in an optical play of positive and negative space. From a closer vantage the spare pine boards come alive with detail. The setting of screws marks a steady cadence while the wood grain swirls. The interior of the work contains a secret: mirrors line its frame on all four sides, opening up an internal landscape of seemingly infinite reflection, a field that appears to extend forever.

This work bolsters the ICA/Boston’s holdings of works by artists with connections to Boston and the museum’s exhibition program, and it also expands the museum’s holdings of sculptures that reference everyday objects by such artists as Mona Hatoum, Cornelia Parker, and Rachel Harrison.