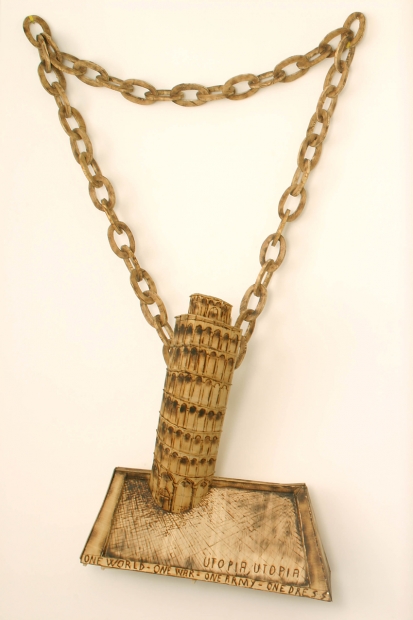 Over the past decade, Thomas Hirschhorn has become known for ephemeral constructions he calls “displays” rather than “installations.” Often overflowing their museum or gallery environments, these works resemble shanties, makeshift altars, or department stores gone awry. To build his displays, Hirschhorn employs low or untraditional art materials—cardboard, packing tape, aluminum foil, plastic, and plywood—which are then layered with all manner of text and image: hand-scrawled slogans, clippings from newspapers and magazines, stacks of philosophy and political science books. The result is an intense and immersive interplay of ideas made physical.

Wood-Chain VIII (Pisa Tower) is a more discrete work than Hirschhorn’s usual production—but it is just as difficult to classify. Neither sculpture, relief, nor painting, the work resembles a giant necklace supporting a pendant made of wood inscribed with burned-in figuration and detail. Hirschhorn’s signature mode is to juxtapose different, sometimes incongruous, types of symbolism, making intellectual and political leaps that create rough collisions. Wood-Chain VIII (Pisa Tower) links or “chains” together a conversation about architecture and globalization––its tower is an oversized version of a memento that might be bought at a tourist gift shop, its wooden chain a reference to the gaudy jewelry of hip-hop or mafia dons colloquially named “bling” (for the “bling-bling” sound of the cash register). The work speaks to the circulation of architectural signs along the trashy byways of touristic commerce—not without irony, given Hirschhorn’s use of patently un-bling burnt wood. Branded on the pendant’s base is the phrase “Utopia, Utopia, One World, One War, One Army, One Dress,” the title of Hirschhorn’s 2005 exhibition at the ICA/Boston, which denotes the artist’s longtime preoccupation with the dystopian conflicts of globalization.

This work, by an artist supported by the ICA with a major early exhibition, deepens and broadens the museum’s holdings in object-based or sculptural work, joining major sculptural works by Tara Donovan, Rachel Harrison, and Mona Hatoum.

Thomas Hirschhorn: Utopia, Utopia = One World, One War, One Army, One Dress