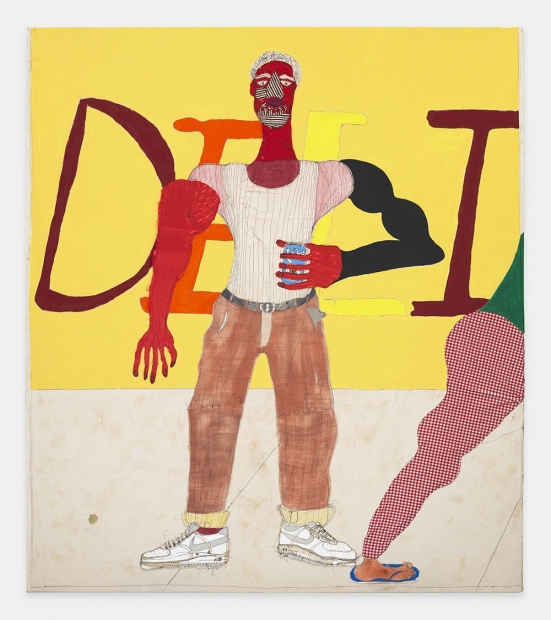 Tschabalala Self is among a generation of young artists who are advancing new modes of figurative painting, often while privileging African American selfhood and intersectional identities. Self’s large-scale work employs a diverse range of materials through collage, printmaking, and colorful handsewn and machine-sewn fabrics to form avatars or characters that are at once grounded in reality and visually uncanny.

Based between New Haven, Connecticut, and her hometown of Harlem, Self has long been interested in urban social life: since 2017 she has explored the bodega, drawing on the ubiquitous, small urban store as a multicultural site and subject of exchange and interaction. Lite is her first artwork to represent a character from this project on the outside rather than the inside of a store. Here, the wordplay of “deli” and “lite” evokes the language of fast food, consumption, and the false promises of advertising. Emblematic of the transition in the artist’s practice from a focus on private interactions to social exchange in public, Lite features a female figure striding assertively past a male bystander who nearly blends into the storefront, suggesting his omnipresence as a neighborhood fixture who is often ignored. Through this passive interaction, a tension emerges between stasis and movement, dereliction and progress, which the artist considers emblematic of city life. Addressing the dynamic of self-expression and the unwanted attention it sometimes draws—and, by extension, of invisibility and hypervisibility—Self claims space for bodies to exist for their own self-realization. Her figures celebrate the black body (especially those of black women), and their textural, coloristic, and abstract qualities reference psychological and emotional states. The artist’s community of interrelated characters, which often have imaginative or fantastical features, engages contemporary cultural discourses on intersectional and fluid identities, reflecting the patchwork of memories, physical parts, and psychic associations that make us human.

Lite joins other works in the ICA’s collection by artists who innovate in textile and collage, such as Nick Cave and Kevin Beasley, and builds on the ICA’s strong holdings in figurative painting by artists such as Joan Semmel and Dana Schutz.

Acquired through the generosity of the Acquisitions Circle, Tristin and Martin Mannion, Patrick Planeta and Santiago Varela, Rob Larsen, and anonymous donors 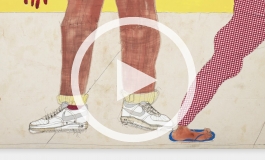 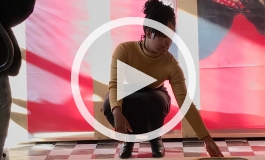 Tschabalala Self: Out of Body