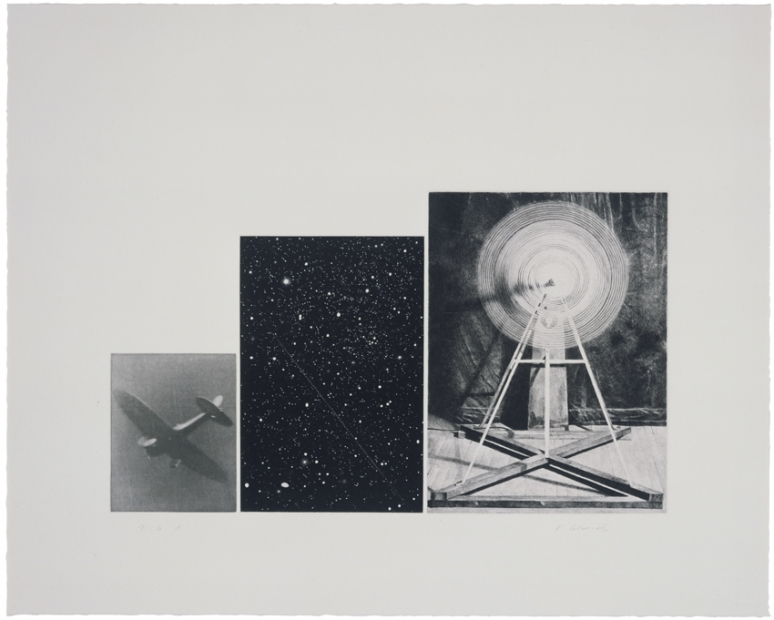 The drawings and paintings of Latvian-born, Indianapolis-based Vija Celmins are meticulous copies of photographs she has made. Her labor-intensive technique results in highly detailed photorealistic drawings of natural subjects such as the sea, desert, and constellations. Initially, Celmins began working in this exhaustive, repetitive manner as a way “to get to some other place that was a little more primitive, maybe more old-fashioned, without really thinking.”

Concentric Bearings D brings together on a single sheet of paper three images made from separate plates. On the left is a mezzotint of a falling plane, a recurring motif in Celmins’s work. The soft gray of the print as well as the surface scratches recall the material qualities of the original photograph. In the center is an aquatint of a night sky. The third print is a photogravure Celmins made from a photograph of Marcel Duchamp’s kinetic sculpture Rotary Glass Plates (Precision Optics). Taken together, the images encapsulate the range of subject matter and techniques found in Celmins’s oeuvre. Each of them marks a moment of arrested movement—of a plane, the night sky, and a kinetic sculpture. Through Celmins’s intensive process, she brings the subjects “back to life by putting them in a real space that you confront.”

Concentric Bearings D introduces into the ICA/Boston collection an artist who offers an important precedent for younger artists engaged with the history and use of photography, such as Thomas Ruff and Sara VanDerBeek, both represented in the collection. It also complements a recently acquired suite of prints by Tacita Dean that features found historical photographs.