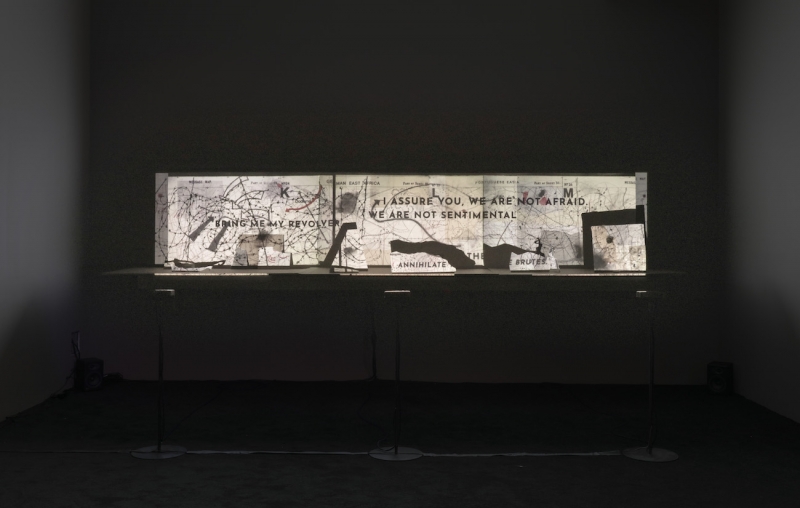 The central focus of the wide-ranging, interdisciplinary work of William Kentridge is the prolonged effects of colonialism in South Africa, more specifically the National Party’s (a.k.a., the Afrikaner National Party) inhumane and discriminatory apartheid system. Across a diverse range of media, from drawing, performance, and film, to opera and theatrical productions, Kentridge reanimates painful histories and the paradoxes of colonialism—“what we’ve chosen not to remember,” as he says.

KABOOM! is a monumental, three-channel work projected onto a scale model of the stage from Kentridge’s tour-de-force performance The Head & the Load, which premiered at Tate London before being presented at New York’s Park Avenue Armory. Set to a rousing, orchestral score composed by Philip Miller and Thuthuka Sibisi, KABOOM! tells the story of the nearly two million African porters and carriers used by the British, French, and Germans during World War I. Employing his trademark multidisciplinary approach and his signature trope of the procession, Kentridge builds up dynamic layers of drawings, moving images, and texts projected over top of sculptural paper props to embody the dramatic arc and theatrical intensity of The Head & the Load at gallery scale. The title of the work comes from a Ghanaian proverb that reads, “the head and the load are the troubles of the neck,” and the porters in KABOOM! shoulder the physical load transported all across Africa. As the work suggests, they are the ones who ultimately bare the historical legacy of colonialism and war.

KABOOM! is a major acquisition, adding one of the most important contemporary artists to the collection. This work joins other major room-filling works by Ragnar Kjartansson, Steve McQueen, and Kara Walker, and advances the ICA’s priority and commitment to diversify the collection with artists of the Global South.