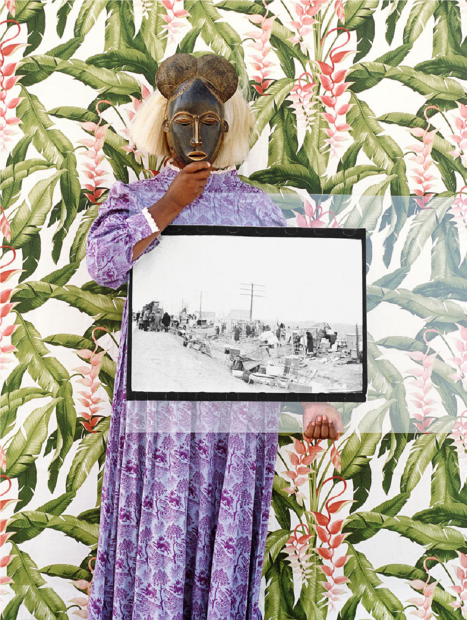 New York-based artist Xaviera Simmons pursues a multimodal, research-based practice that spans photography, performance, video, sound, sculpture, and installation, and is grounded in an investigation of the experiences, memories, and histories of African diasporas.

Sundown (Number Twelve) is part of Simmons’s Sundown series (2018–ongoing), an encyclopedic exploration of contemporary American life as shaped by the legacies of slavery, colonialism, segregation, and migration. The series draws its name from so-called sundown towns—places known to be unsafe, especially at night, for black people—and is shaped by her archival study of records of life in the Jim Crow era. In Sundown (Number Twelve), the artist appears frocked in a floral cotton dress and against a midcentury botanical backdrop that references the landscapes and products associated with exploitative systems of labor, from colonialism to American slavery. She holds a black-and-white photograph of migrants on the Great Migration, when an estimated 1.8 million African Americans moved first from the rural South to the urban South, and later to the North and the Midwest between 1890 and 1930 (this was followed by the Second Great Migration, from 1940 to 1970, during which time over five million African Americans migrated to the North, the Midwest, and the West). She also holds a mask of indeterminate origin over her face, suggesting a form of mediated looking—perhaps revealing views of the slave trade’s legacy and new visions for the future—and referencing the mask’s currency as a collectible signifier of the Western idea of Africa, sold and traded as a commodity. Through such performative staging, Simmons’s work embeds heavy visual metaphors within a lush aesthetic to point to the still-precarious circumstances of people of color in America.

Sundown (Number Twelve) strengthens the ICA/Boston’s holdings in photography and speaks to the highly composed and historically allusive studio photographs of Leslie Hewitt and the performative photography of Laurie Simmons and Jimmy DeSana. Simmons’s work advances the museum’s priority and commitment to include underrepresented voices and stories in the permanent collection.