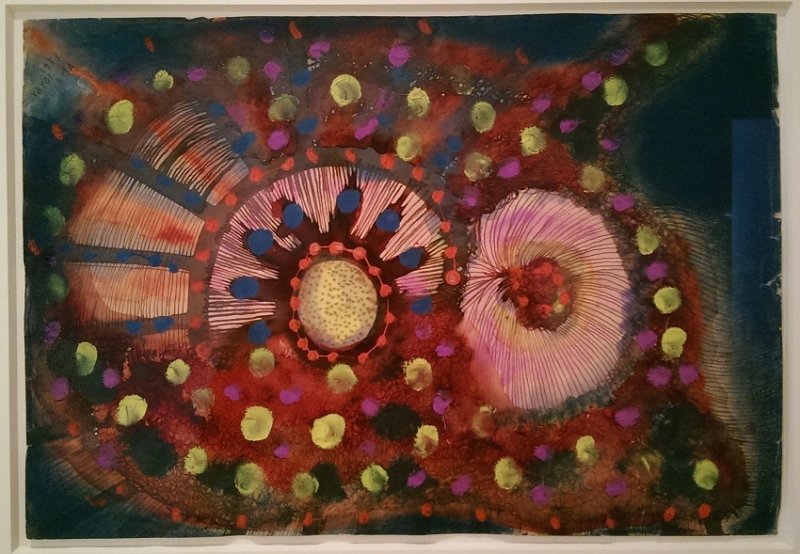 Although her work encompasses painting, photography, sculpture, and video, Yayoi Kusama is perhaps best known for her overwhelming installations. Using various combinations of motifs such as lights, dots, and phalluses, Kusama creates environments that are frequently described as “obsessive,” filling entire rooms with repeated shapes and images. The artist herself has said she is an “obsessional artist.” The term refers not only to her art but also to her mental condition. The artist has experienced obsessive-compulsive disorder since 1973, the year she returned to Japan from the United States. She checked herself into a hospital for the mentally ill in Tokyo in 1975, and since 1977 has lived in the facility, within walking distance of the studio where she works.

A Flower (No. 14) is one of Kusama’s early works, created before she arrived in the U.S. in 1958. Originally trained in the traditional Japanese style of painting, Kusama began studying Western styles in 1952, becoming especially interested in the work of American artist Georgia O’Keeffe, with whom she began a correspondence in the late 1950s. A Flower (No. 14) reveals the influence of O’Keeffe’s floral paintings: Kusama foregrounds her subject on the picture plane, and seems to play on the similarities between vaginal and floral anatomies. One of several related compositions Kusama made during this period, A Flower (No. 14) is an early example of her experimentation with the dots that would eventually become a signature motif that is repeated throughout her monumental installations.

The first work by Kusama to enter the ICA/Boston collection, A Flower (No. 14) strengthens the museum’s holdings of work by key feminists working in the 1960s and ’70s, such as Louise Bourgeois and Nancy Spero, and serves the ICA’s goal of augmenting its collection of works by international artists.