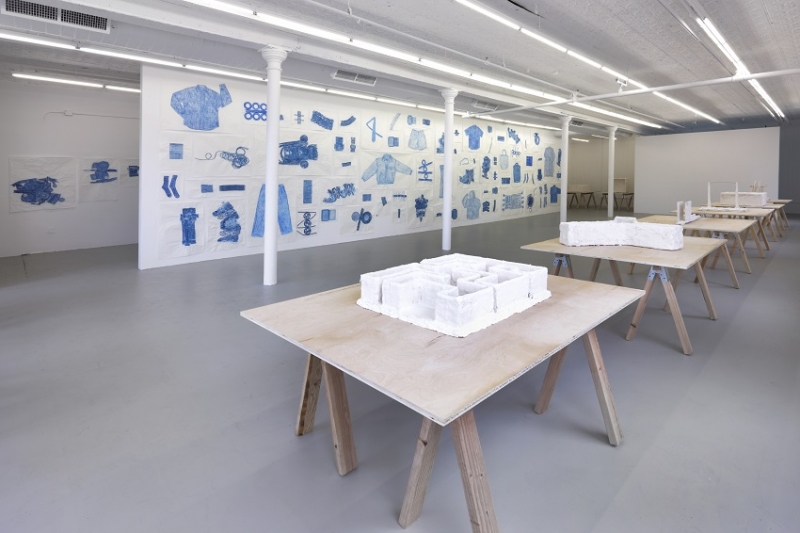 Sonia Almeida, Jennifer Bornstein, Lucien Castaing-Taylor and Véréna Paravel, and Lucy Kim have been named the recipients of the 2017 James and Audrey Foster Prize Exhibition, the museum announced today. In media including painting, sculpture, printmaking, film, and video, and exploring a range of themes and subjects, each of the artists engage the human body with a tactile approach to its cultural, psychological, and historical resonances. Each of the artists will present a major work, or group of works, on view for the first time in Boston. The exhibition is organized by Dan Byers, Mannion Family Senior Curator, with Jeffrey De Blois, Curatorial Assistant, and will be on view at the ICA from Feb. 15 through July 9, 2017.

“This year’s James and Audrey Foster Prize Exhibition shines a light on a selection of established Boston-based artists working at a national and international level, but whose work has only received limited exposure here at home,” said Jill Medvedow, Ellen Matilda Poss Director of the ICA. “We are grateful to Jim and Audrey for this opportunity to share such exceptional work with our audiences.”

“We are very pleased to congratulate the 2017 recipients of the Foster Prize. Their work demonstrates the creativity, strength, and talent of Boston’s robust art community,” said James Foster, Chair of the ICA Board of Trustees and Chairman, President & Chief Executive Officer of Charles River Laboratories.

Central to the exhibition, this iteration of the James and Audrey Foster Prize features a new program, Foster Talks, enabling audiences to engage more deeply in the work and practice of the Prize winners. Once a month over the course of the exhibition, in a space in the exhibition galleries, each artist will present their work and invite an important writer, artist, performer, researcher, or other cultural producer who has influenced their artwork, or whose own work resonates with the artist’s. The conversations will be followed by a free reception, open to the public. The Foster Talks will connect questions around contemporary art to a broad range of cultural, intellectual, and political issues, creating relationships between art and different fields. Through the Foster Talks, the ICA will welcome an expanded cultural community to form around the exhibition, animating the galleries throughout the duration of the exhibition.

Images are available upon request.

Profiles of the 2017 Foster Prize Artists

Sonia Almeida was born in Lisbon, Portugal, and lives in Arlington, MA. Almeida received a B.A. from Faculdade de Belas Artes da Universidade de Lisboa and a M.F.A. from Slade School of Fine Art, University of London. She has received numerous awards and grants, including a Pollock-Krasner Foundation grant and an Artist Fellowship from the Massachusetts Cultural Council. Her work has been widely exhibited at institutions nationally and internationally, including the MIT List Visual Arts Center, Cambridge; Culturgest, Portugal; Serralves Museum, Portugal; and Witte de With, Netherlands.

Jennifer Bornstein was born in Seattle and lives in Cambridge, MA. Bornstein received a B.A. from the University of California, Berkeley, and a M.F.A. from the University of California, Los Angeles, before participating in the Whitney Museum of American Art’s Independent Study Program. She has received numerous awards and grants, including a DAAD Berliner Künstlerprogramm fellowship and a Pollock-Krasner Foundation grant. Her work has been widely exhibited at institutions nationally and internationally, including the Whitney Museum of American Art, New York; the Museum of Contemporary Art, Los Angeles; and the Stedelijk Museum, Amsterdam.

Lucien Castaing-Taylor was born in Liverpool, UK, and Véréna Paravel was born in Neuchâtel, Switzerland; they are based in Cambridge, MA, and Paris, France. In 2006, Castaing-Taylor founded the Sensory Ethnography Lab (SEL), an experimental film center at Harvard University whose collaborative output in a variety of media—including film, video, phonography, and photography—innovatively draws from the fields of aesthetics and ethnography. Castaing-Taylor’s work is in the permanent collections of the Museum of Modern Art, New York, and the British Museum, London, and has been exhibited at Tate, London; Centre Pompidou, Paris; the Museum of Modern Art, New York; Whitney Museum of American Art, New York; Whitechapel Gallery, London; and Institute of Contemporary Arts, London. Paravel’s films have won Best First Feature and the Best First Feature Jury award at the Festival del Film Locarno and the Punto de Vista Award for Best Film. Foreign Parts (with J.P. Sniadecki, 2010) was a New York Times Critics’ Pick. Castiang-Taylor, Paravel, and the Sensory Ethnography Lab were included in the 2014 Whitney Biennial.

Lucy Kim was born in Seoul, South Korea, and lives in Cambridge, MA. She received a B.F.A. from the Rhode Island School of Design and a M.F.A. from the Yale School of Art. She attended the Skowhegan School of Painting and Sculpture and the MacDowell Colony, and is the recipient of the Carol Schlosberg Memorial Prize and the Ellen Battell Stoeckel Fellowship from Yale, as well as the Boston Artadia Award. She is a founding member of the collaborative kijidome, and is currently Lecturer in Fine Arts at Brandeis University. Her work is included in the collection of the Kadist Foundation in Paris, among others.

About the James and Audrey Foster Prize