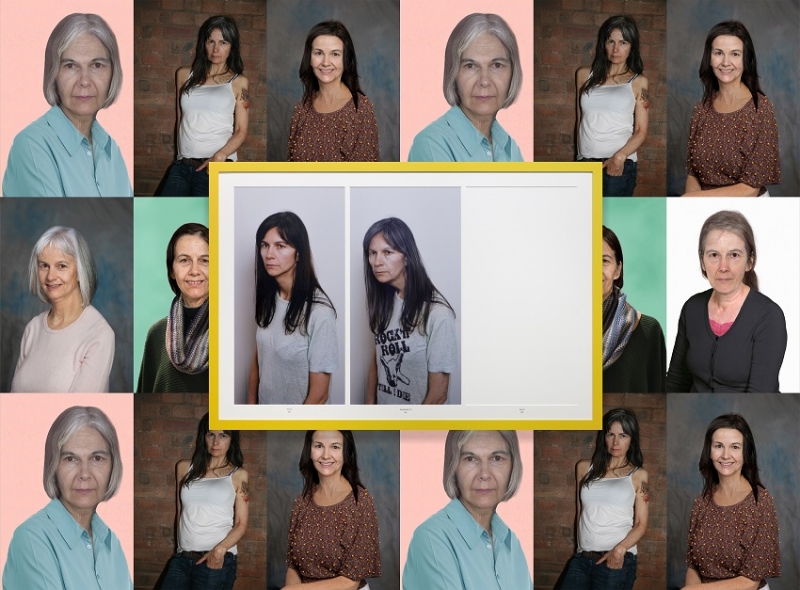 Gillian Wearing (b. 1963, Birmingham, UK) has created Rock ‘n’ Roll 70 (2015/2016), a monumental, site-specific photographic mural for the Institute of Contemporary Art/Boston’s Sandra and Gerald Fineberg Art Wall. On view from December 9, 2016 through January 1, 2018, this new work is the first presentation in Boston of the celebrated artist’s work and was organized by Eva Respini, Barbara Lee Chief Curator, with Jessica Hong, Curatorial Assistant.

Best known for her photographic and video works that intimately capture aspects of our familial and personal histories, Wearing began her career photographing strangers she encountered on London’s streets and continues to explore the nuances of identity, the intersections of public and private, and the performativity of self. Over her career, Wearing has also mined her own life and history, having meticulously sculpted masks of her loved ones and donned them to create eerie self-portraits as her brother, mother, or her own self at an earlier age.

For Rock ‘n’ Roll 70, Wearing asked individuals working with age-progressing technology to digitally enhance self-portraits created at age 50 (her current age) to see what she might look like at age 70. Printed as wallpaper, these aged portraits show the diversity of possibilities of the artist’s future self. They differ slightly or drastically from each other, revealing the limitations of what we believe to be pioneering technology, exploring how identity can be represented, and further emphasizing the uncertainty of what lies ahead.

On top of the wallpaper hangs a framed triptych of photographic portraits, consisting of Wearing at her current age, an enhanced portrait, and a blank space, as the artist intends to make a self-portrait when she turns 70 to complete the triptych. In a world oversaturated by images, particularly “selfies,” Wearing explores the complexities of identity mediated through technology, which is a topic that’s more urgent than ever.

The ICA’s Sandra and Gerald Fineberg Art Wall is dedicated to site-specific works by leading contemporary artists, commissioned annually. Located along the eastern interior wall of the museum’s glass-enclosed lobby, the most public space in the museum, the Art Wall is the visitor’s first encounter with art upon entering the building. Wearing’s photographic mural highlights the diverse range of possibilities for the Art Wall, a fitting site for this installation as it further collapses the public and private spheres. Rock ‘n’ Roll 70 will explore the lobby as a psychological space—the artist’s portraits are confrontational and alluring, discomfiting and thought-provoking.

Based in London, Wearing gained critical attention after winning the acclaimed Turner Prize in 1997. She was nominated for the Vincent Award presented by the Gemeentemuseum/GEM in The Hague, Netherlands (2014) and for the Liberty Human Rights Awards for her public sculpture A Real Birmingham Family (2014). Since the early 1990s, Wearing has been working primarily in video and photography, utilizing the public as her subject matter to investigate what we as private individuals carry with us in the public sphere. With the Internet boom and social media explosion, the public and private realms have all but collapsed. This has become a dominant theme for many contemporary artists and a significant issue for the culture-at-large. Wearing describes her methodology as “editing life,” similar to how we present ourselves to our online public. However, unlike reality culture of our day, which is full of judgment and emotive responses, the artist photographs her subjects and herself with as little subjectivity as possible, contrasting with the type of online personas we wish to portray.

Support was provided, in part, by Jean-François and Nathalie Ducrest and Area9 Group.