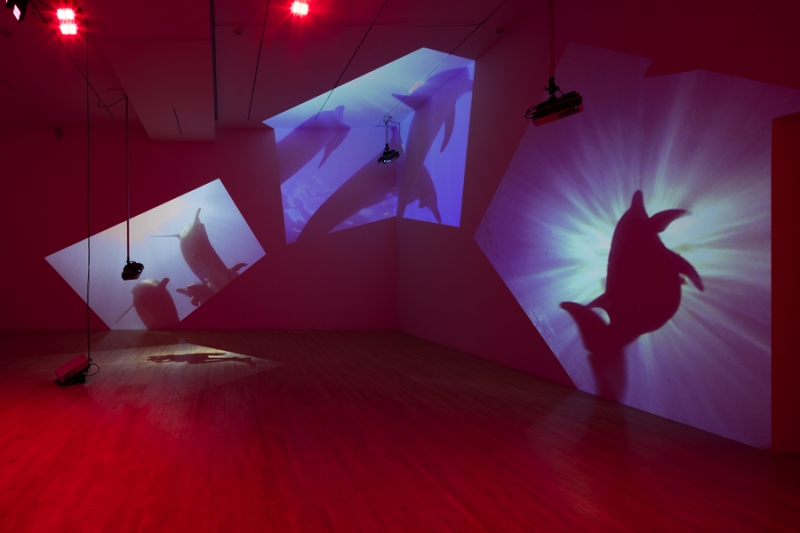 Summer 2018 at the Watershed

Inaugurating the new ICA Watershed in East Boston is an exhibition of works by artist Diana Thater (b. 1962, San Francisco) that create immersive experiences through light and moving image projections.

The installation will center on Thater’s artwork Delphine, reconfigured in response to the Watershed’s raw, industrial space and coastal location. In this monumental work, underwater film and video footage of swimming dolphins spills across the floor, ceiling, and walls, creating an immersive underwater environment. As viewers interact with Delphine, they become performers within the artwork, their own silhouettes moving and spinning alongside the dolphins’.

In addition to Delphine, the Watershed will feature a recent sculptural video installation, A Runaway World, focused on the lives and worlds of species on the verge of extinction and the illicit economies that threaten their survival. Produced in Kenya in 2016 and 2017, A Runaway World is staged within a unique architectural environment of free-standing screen structures designed by the artist.

Thater received a BA in Art History from New York University before receiving her MFA from the Art Center College of Design in Pasadena, California. She has had major solo exhibitions at leading institutions, including the Borusan Contemporary, Istanbul (2017); Museum of Contemporary Art, Chicago (2016); Los Angeles County Museum of Art (2015); Kunsthaus Graz, Austria and Natural History Museum, London (2009). Her work was featured in the 56th Venice Biennale at The Azerbaijan Pavilion as well as several Whitney Biennials (1995, 1997, and 2006), and is represented in prominent museum collections worldwide, including The Art Institute of Chicago, Los Angeles County Museum of Art, Solomon R. Guggenheim Museum (New York) and Stedelijk Museum (Amsterdam). Among her numerous notable awards, Thater has received fellowships from the John Simon Guggenheim Memorial Foundation (2005) and the National Endowment for the Arts (1993). A prolific writer and educator, Thater lives and works in Los Angeles, where she teaches at the Art Center College of Design.

About the Watershed
On July 4, the ICA will expand its artistic programming across Boston Harbor to the Watershed, a new space for art in the Boston Harbor Shipyard and Marina. Award-winning firm Anmahian Winton Architects (AW) has been engaged to design the renovation of the facility, a former copper pipe factory, and restore the historic building for new use. The ICA will present artworks and public programs seasonally in the newly renovated 15,000-square-foot space while continuing year-round programming in its Diller Scofidio + Renfro-designed facility in Boston’s Seaport District. The Watershed will be a raw, industrial space for art unlike any other in Boston. In addition to a flexible space for exhibitions, programming, and workshops, the Watershed will house an orientation gallery introducing visitors to the historic shipyard complemented by a waterside plaza that will serve as a gathering place with stunning harbor views. The Watershed is located across Boston Harbor from the ICA in the Boston Shipyard and Marina in East Boston. The ICA will provide a boat to bring visitors between both locations. Admission to the Watershed will be free for all.