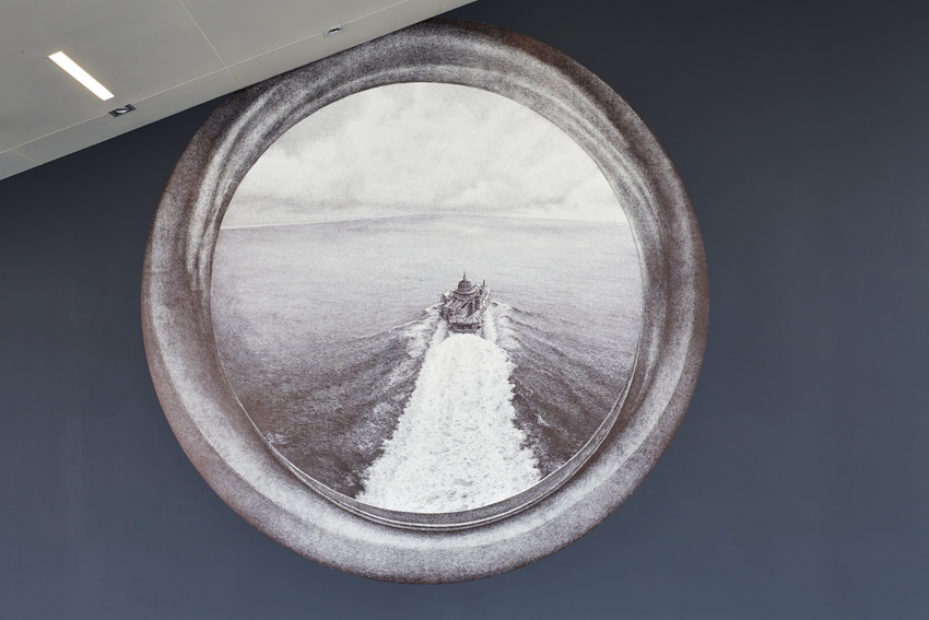 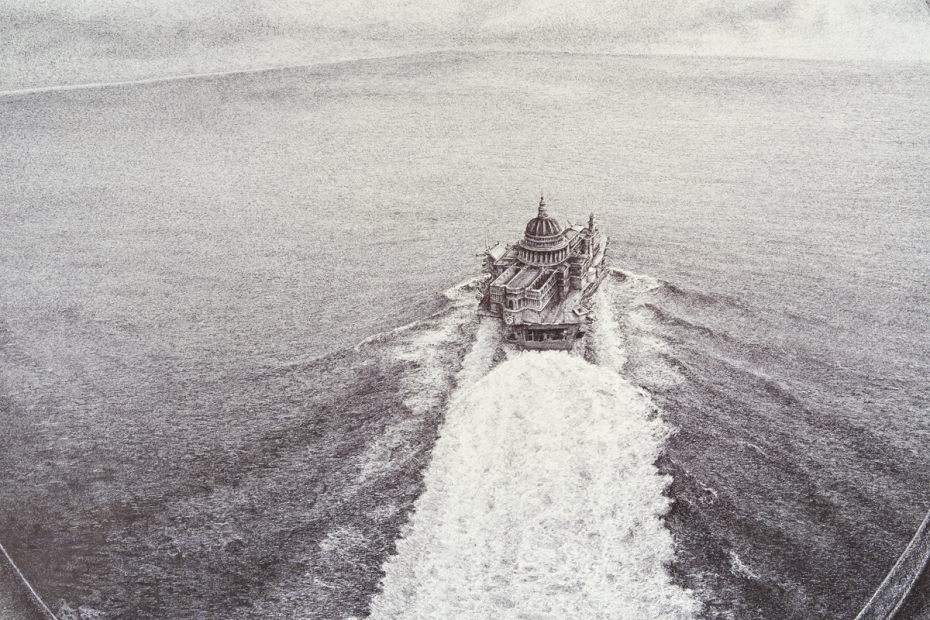 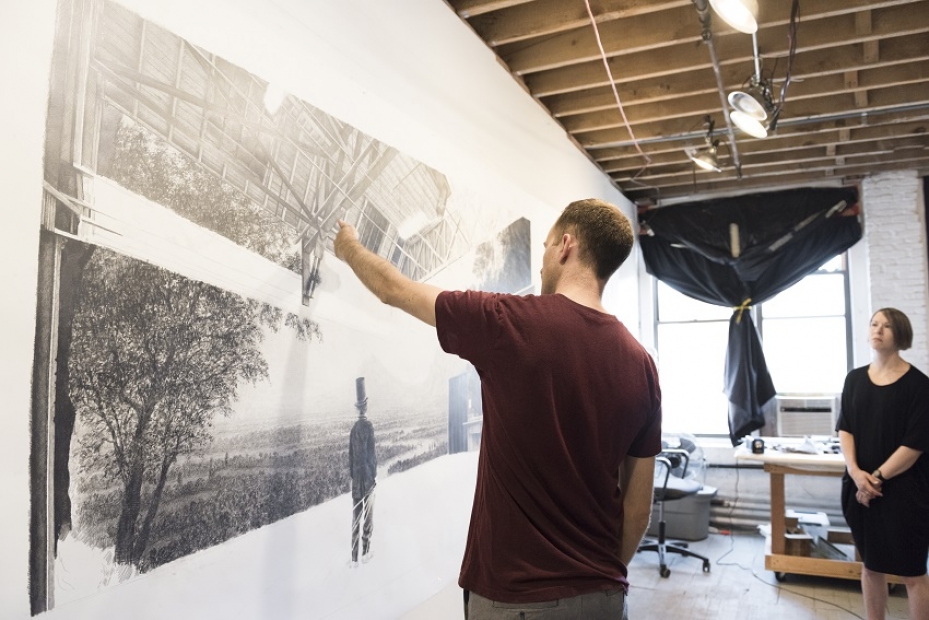 A new book brings together the artist’s fantastical drawings on paper and walls.

Monumental as it is, Ethan Murrow’s drawing Seastead on the Sandra and Gerald Fineberg Art Wall at the ICA is only one small part of the Boston-based artist’s output. A new book, Ethan Murrow (Hatje Cantz) gathers dozens of his works, presenting for the first time in print his large-scale wall drawings in ballpoint pen alongside those he executes on paper. Murrow’s work, photorealist but fantastical, examines the boundaries between fiction and depicted reality while telling stories of the artist’s creation.

Ruth Erickson, Assistant Curator at the ICA and organizer Seastead, contributed texts to the book, available at the ICA Store. Read an excerpt below.

The landscape around the ICA seems to be in a state of constant change. New buildings appear over night, while historical structures, like the brick sailor’s church, Our Lady of Good Hope, disappear just as quickly. This dramatic architectural transformation of the Seaport District (what has already taken place and what is planned for the near future) is only echoed in the watery depths of the adjoining Boston Harbor. While the sea’s steady tides might suggest a sense of timelessness—the retreat and return with each moon cycle—the natural harbor links to a vast network of waterways, bodies, and commerce undergoing significant alterations. The harbor becomes a kind of marker of the many ways that environmental changes, from rising sea levels to diminished fishing stocks, reshape, and will increasingly reshape, human existence on the earth. It is with these thoughts in mind that I invited Murrow to create a wall drawing for the ICA’s Sandra and Gerald Fineberg Art Wall.

Murrow based his drawing of the large boat on American aircraft carriers, the impressive nautical devices that have been central to the nation’s military prowess. Perched on top of the carrier, Murrow has drawn St. Paul’s Cathedral, which was constructed in London after the great fire in 1666 and withstood the Blitz bombing of World War II. Sourcing images from the Internet, Murrow created a digital mock-up, marrying the carrier and the cathedral in the middle of the sea, and then set out with three assistants to draw it, by hand and in marker directly on the wall over the course of ten days. This formidable task, which took almost 100 hours and exhausted over 400 Sharpie pens, embodied a remarkable commitment and expenditure of raw energy, an effort that resonated with the subject matter.

Structures of immense physical strength, the carrier and cathedral are symbolic of the nations that created them—not coincidentally, the same great powers of Boston’s own Puritan origins—but in Seastead, they appear somewhat tenuous. Is this a rebellious breakaway, a forced exile, or a utopian endeavor? What triggered it? Insurgent political regimes, rising sea levels? The work’s title, Seastead, is derived from “seasteading” (a combination of the words “sea” and “homesteading”), which refers to the creation of an island state outside of the boundaries and the laws of any sovereign nation. If taken at face value, the title and imagery may conjure a break-up of the great Western powers and the formation of a new entity in its nascent stage of assembly, an apt characterization of the twenty-first century. Such a process is replicated in the individual marks that begin as countless crosshatches by a team of hands and then cohere at a distance into a photorealistic drawing only to dissolve into thousands of indeterminable marks upon scrutiny. Murrow holds together these opposing processes, allowing formation and disintegration to coexist in both the narrative arc and drawing. Seastead is neither a beginning nor an ending but rather both at once, capturing the resilience of the one and the many working together. 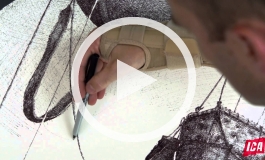 The Making of a Monumental Mural at the ICA/Boston 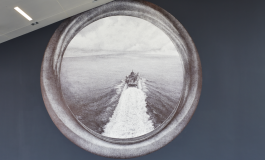