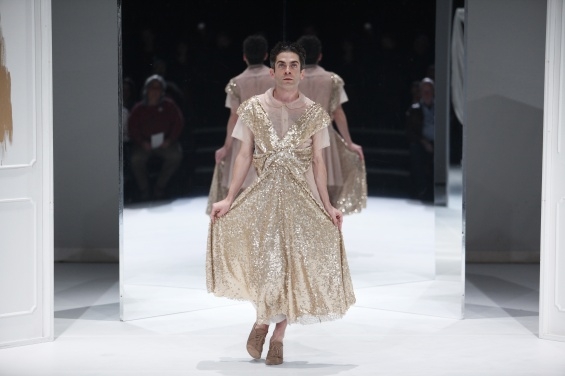 From an over-the-top interpretation of Jean Genet’s The Maids to a notorious opera infused with the genius of artist William Kentridge, four productions worth traveling for.

Chambre, by Jack Ferver and Marc Swanson
New Museum, as part of the Crossing the Line Festival
Sep 23 – Oct 4

In the summer of 2009, the ICA hosted writer, choreographer, and director Jack Ferver and American visual artist Marc Swanson, as part of our Summer Stages Dance residency program. Last fall I had the opportunity to see their latest collaboration, Chambre, a wild take on Jean Genet’s The Maids, which serves as a point of departure for a farcical and haunting attack on our culture of celebrity and greed. Catch it while you can at the New Museum, where it’s running as part of the Crossing the Line Festival organized by French Institute Alliance Française.

Ferver refracts Genet through many lenses, including the gruesome facts of the real-life murders that inspired The Maids, Lady Gaga’s infamous courtroom deposition speech, role-play, and a manic fantasy escape to the City of Lights.

His wild imagination and over-the-top performance finds the perfect setting in Swanson’s mythic and evocative sculptures, which function both as freestanding art and a theatrical set, and will be on view as an installation at the New Museum during museum hours. —David Henry, Director of Performing and Media Arts

Electropop songwriter Glasser (aka Cameron Mesirow) will perform her lush, intimately epic songs at The Kitchen, accompanied by visual artist Jonathan Turner’s films and animations. Both artists explore the ways that technology intersects with the natural and human world; this show should be both visually and sonically gorgeous. —John Andress, Associate Director of Performing Arts

Unless we were paying close attention to dance 25 years ago, most of us know the iconic choreographer Twyla Tharp mostly for her work in ballet, Hollywood, television, and, of course, Broadway. For her 50th anniversary she has returned to her roots in modern dance and created three new works to celebrate her 50 years of dance-making in what is sure to be THE dance event of the fall. —David Henry, Director of Performing and Media Arts

Artist William Kentridge stages a new production of Alban Berg’s Lulu for the Metropolitan Opera. The opera tells the story of Lulu, a notorious femme fatale who lures men and women to their doom. Full of sex, obsession, and death (everything that makes opera great!), the production includes costumes, scenery, and animated projections that Kentridge designed for the revival of this early-twentieth century masterpiece. Especially recommended for those who saw—and were mesmerized by—Kentridge’s The Refusal of Time at the ICA last year. —John Andress, Associate Director of Performing Arts