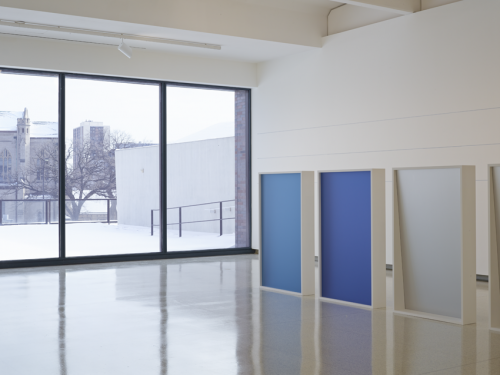 The Institute of Contemporary Art/Boston (ICA) is pleased to present the first mid-career survey of works by New York-based artist Liz Deschenes (b. 1966, Boston, Massachusetts). Organized by Eva Respini, Barbara Lee Chief Curator, Liz Deschenes will open to the public on June 29, 2016 and remain on view at the ICA through October 9, 2016. Over the past two decades, Deschenes has explored and tested the limits of what constitutes a photograph, transfixing audiences with her meticulous and thought-provoking work. The exhibition at the ICA will represent a landmark in the artist’s career, as it is the first survey exhibition to bring works produced from 1997 to the present into dialogue. The approximately twenty works included chart the course of her investigation, showcasing a diverse set of objects which include installation-sized reflective photograms, dye-transfer monochromes, photo-filmic moirés, green-screen works, and sculptural elements that draw viewers’ attention to the architecture of the exhibition space. In a world where we digest hundreds of images at a quick glance, mostly on a screen, Deschenes’s works demand to be experienced in person, proposing seeing as a physical act. She employs the language of sculpture, architecture, and exhibition design to consider the apparatus of viewing art, inviting viewers to slow down, circle her work, see their reflections in it, and become attuned to the architecture that surrounds it and them.

Deschenes’s photographs are the products of her ongoing fascination with the processes of both seeing and image making. Her works reference the history of photography, the architecture of their surroundings, and the history of the spaces they inhabit. A consummate educator, Deschenes’ oeuvre traces a line through technologies that marked the development of the medium of photography—from cameraless photograms that adopt the processes of 19th century daguerreotypes to hybrid prints of digital screen that straddle the divide between the digital and the analog.  While refusing to submit to the rules of photographic convention, Deschenes demonstrates her extensive knowledge of photography’s evolving history. Working both within the darkroom and out in the field, her process is characterized not by a single technology, method, or subject, but rather by a sustained engagement with the fundamental materials of photography (light, chemistry, and time) and the mechanics of viewing. Responding to the conditions of production, she calibrates her works to the site as a way to underscore and nuance the spectator’s relationship to space, sometimes encouraging new visual encounters and at other times responding to and disrupting the architectural surround.

The process by which Deschenes executes her distinctive photograms (which make up a significant portion of her work) is inherently performative, as the artist exposes swaths of light-sensitized paper to both the sunlight and moonlight near Bennington College in Vermont, where she teaches. As opposed to traditional photograms, which typically capture the contours of objects placed upon light-sensitive paper, Deschenes’s versions have no subject, but instead bear the literal traces of the ambient conditions present during their production: swirls, pock marks and drips which vary according to the temperature, humidity, phase of the celestial bodies, and mutable nature of the noxious chemicals involved. When mounted, the photograms reflect the viewers own image in their mirrored surfaces, adding an immersive quality to their viewing. It is this powerful play of light and color that resonates throughout Deschenes’ art and encourages the viewer to reflect upon the nature of viewing, image-making, and ultimately, representation. In Tilt/Swing (360° field of vision, version 1), Deschenes playfully deploys mounted photograms in a 360 degree circuit from floor to ceiling. The title suggests an analogy between the gallery and a camera. When viewers encounter the installation, their bodies tilt and swing resulting in an angling and manipulation of vision, the body and by extension experience.

A lushly illustrated publication includes a comprehensive essay by the exhibition curator, essays by noted historian and curators, others artists’ writing on Deschenes, and an interview with the artist.

About the artist
Described by the New York Times as “one of the quiet giants of post-conceptual photography,” Liz Deschenes has exhibited her work regularly since receiving her BFA in 1988 from the Rhode Island School of Design in Providence. She has recently mounted exhibitions at Miguel Abreu Gallery, New York; Campoli Presti, London and Paris; Secession, Vienna; and Sutton Lane, Paris and Brussels. Featured in the 2012 Whitney Biennial, she is most recently the recipient of the 2014 Rappaport Prize awarded by the deCordova Sculpture Park and Museum. Her work is represented in the collections of the Walker Art Center, Minneapolis; Centre Pompidou, Paris; Hirshhorn Museum and Sculpture Garden, Washington, D.C.; The Metropolitan Museum of Art, New York; Museum of Modern Art, New York; The Art Institute of Chicago; Whitney Museum of American Art, New York; Solomon R. Guggenheim Museum, New York; and San Francisco Museum of Modern Art. Since 2006, she has been a member of the faculty of Bennington College in Bennington, Vermont.