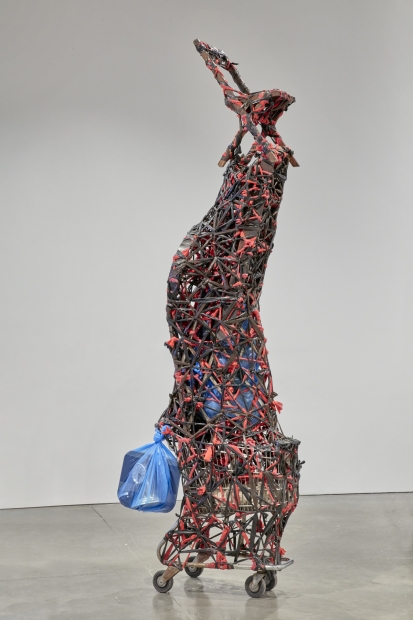 Every morning when I walk from South Station to the ICA, the city reveals the brutality, inequality, and injustices that it tries to cover with a night sky. Besides the regular commuters every morning, I salute the usual occupants of the streets. Depending on the season, sometimes they have the prime location facing the ocean, and sometimes their home on the Harborwalk is under water. And every morning, when I see the shopping carts parked at the oceanfront, Nari Ward’s Savior comes to my mind.

Resembling the carts used by homeless or nomadic people, Savior rises up in its grandeur, while also becoming heavy with all the materials and memories attached to it. In contrast to the invisibility assigned to this population by the ignorant eyes of passersby, Savior asserts its visibility and asks for engagement and contemplation from the viewer. Like Ward claiming city streets in his 1996 video Pushing Savior, Savior claims its own space in the museum — and may be taking a step further as it demands its place in the untold histories within the walls of the museum.

Savior not only contemplates identity, representation, and politics in the streets – it also successfully mimics the transactions of the consumer world. There is always something left over, something collectible, in this world, and the values of these objects might be the same in essence; in an unjust world, values are imbalanced too. The clocks collected in a blue plastic bag hanging from the corner of Ward’s work are not any different from the objects that lay in the storage of a collector – maybe they are even luckier to be out there in the world.

After an encounter with Savior, as with many powerful artworks, your relationship with your surroundings changes and your eyes start to see, discover, and understand.

Mehtap Yagci has been with the ICA since 2018 as Executive Assistant. She moved to Boston from Istanbul, and holds degrees in Cultural Studies and Contemporary Art Theory. In her spare time she enjoys cooking Turkish food and connecting with her friends and family scattered all over the world.