Experience the art of summer at the Institute of Contemporary Art/Boston (ICA) this season with the museum’s exciting line-up of exhibitions, performances, outdoor art and events.

NEW Outdoor Sculpture on the Waterfront
Ugo Rondinone: Moonrise Sculptures
MAY 17 – SEPT. 11, 2016
Best known for his large-scale sculptures and installations, Ugo Rondinone (born 1964, Brunnen, Switzerland) works in a diverse array of media, including photography, painting, drawing, and video. Rondinone’s Moonrise series consists of nine-foot-tall figures, first modeled in clay, then cast in aluminum, and finally painted, with the hand and finger marks of the artists remaining visible. Each is named after a month of the calendar year. Time—here represented by the relationship between moon, tide, and calendar—has been a longstanding interest of the artist’s. Derived from a series of masks, these monumental visages playfully distort faces and figures with smiles and grimaces, welcoming wonder and empathy in equal measure. In these works, his first figurative sculptures, Rondinone creates a kind of uncanny romanticism. Installed outside of the ICA, MOONRISE. east. april and MOONRISE. east. may, both from 2005, will playfully welcome visitors to the ICA all summer long. 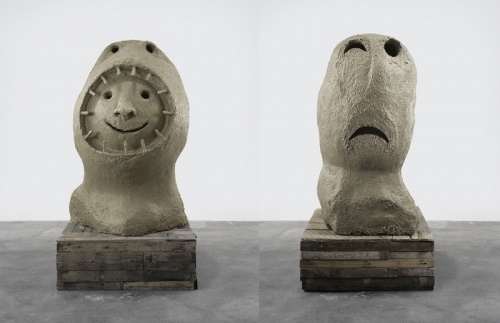 DANCE
JUNE 11, 12, 18 + 19 | various times throughout the day TBD
ON DISPLAY: A Movement Installation
Concept and choreography by Heidi Latsky
Various locations around the ICA,  FREE

Created by former Bill T. Jones dancer Heidi Latsky, ON DISPLAY addresses our propensity to judge people by their physical appearance. For four hours on each of four days, up to 30 local performers representing the dance, disability, and fashion communities will place themselves on display in this commentary on the body as spectacle and society’s obsession with body image. The performers draw attention to the complex relationship between viewer and viewed, an attention that permeates the everyday existence of people who are different in some way.

Summer Stages Dance at the ICA is proud to welcome acclaimed choreographer Maria Hassabi as artist-in-residence this summer. From July 10 to 24, Hassabi and her dancers will take over the Barbara Lee Family Foundation Theater to develop a new work called STAGED, which will premiere in New York City in October and return to the ICA in 2017.

As an artist and choreographer, Hassabi has developed a distinct practice relating the body to the still image and sculptural object; she recently presented an intensive installation at the Museum of Modern Art called Plastic, in which dancers moved throughout the museum at a barely perceptible pace during all museum hours for an entire month. For her new work, she returns to her concerns regarding the relationship between performer and audience, expectations of spectacle, and the interplay between rehearsed and unrehearsed movement.

Hassabi’s work has been presented in theaters, festivals, museums, and public spaces worldwide She is a recipient of the 2015 Herb Alpert Award, a 2011 Guggenheim Fellow, and holds a BFA from California Institute of the Arts.

The ICA and Summer Stages Dance have teamed up for the past 10 years to host some of today’s leading choreographers as they develop new work; past participants have included Faye Driscoll, Rashaun Mitchell, Trajal Harrell, Miguel Guttierez, and Alexandra Beller.

MUSIC
HARBORWALK SOUNDS
THURSDAYS | JUNE 30 – SEPTEMBER 1 | 6 PM
Now in its 10th season, this partnership between Berklee College of Music and the ICA, featuring the city’s most talented young musicians—all presented FREE—is a perennial summertime favorite. With the fresh ocean breeze, fresh food, and fresh music there is no better way to spend a summer evening in Boston. Visit icaboston.org for complete schedule.

SUMMER FRIDAYS AT THE ICA
FRIDAYS| JUNE 3 – AUGUST 31
Celebrate the season at the ICA every Friday from June through August. We’ve got a slew of summertime fun for you to bask in harborside, from DJs spinning your summer soundtrack on the harbor to perennial favorites Talking Taste and First Fridays

TALKING TASTE
FRIDAYS| JUNE 10, 17 & 24 – 6:30 PM
For the sixth year running, the ICA is bringing new and exciting tastes to the Boston waterfront this summer with its popular Talking Taste series. Held on the grandstand, weather permitting, or in the Barbara Lee Family Foundation Theater, Talking Taste events include a cooking demonstration—with samples!—and audience Q+A. Come hear expert tips and trade secrets from some of our city’s most creative, celebrated chefs. Chef details at icaboston.org.

FIRST FRIDAYS
Free for members / $15 nonmembers
Join us the first Friday of every month for an evening of art, fun activities, dancing and music.

JULY 1 | Summer in the City
What better way to survive those simmering days than with some backyard favorites (cornhole anyone?), a seaside breeze, BBQ, and a live band?

AUGUST 4 | White Hot [Vol. 3]
This year we’re taking our annual waterfront white party to the next level. Don your most dapper summer whites and meet us harborside.

Nalini Malani: In Search of Vanished Blood
JUNE 29 – OCT 16, 2016
Nalini Malani (b. 1946, Karachi) is India’s foremost video and installation artist and a committed activist for women’s rights. Born in Karachi in 1946, and currently living and working in Mumbai, Malani came to India as a refugee during the 1947 partition of India and Pakistan, an experience that deeply informs her work. This exhibition centers on Malani’s signature multimedia installation, In Search of Vanished Blood (2012), the title of which comes from a poem by the revolutionary Pakistani poet Faiz Ahmed Faiz. The installation is inspired by East German writer and critic Christa Wolf’s 1984 novel Cassandra, about a struggling female artist and visionary. Combining imagery from Eastern and Western cultures, with sound, projected image, and light, In Search of Vanished Blood is an enthralling, immersive experience. The work comprises six 11-minute video projections streamed around the room through five clear Mylar cylinders, hand-painted with a variety of cultural and historical iconography, which hang in the center of the room. As the Mylar cylinders rotate, the colorful and layered imagery is projected onto the walls, creating a magical environment reminiscent of lantern slide presentations and other proto-cinema experiments in the late-18th and early-19th centuries. The presentation of Malani’s immersive video installation will be accompanied by a selection of related works on paper.

Liz Deschenes
JUNE 29 – OCT 16, 2016
Deschenes is known for her lushly beautiful and meditative work in photography and sculpture, and since the early 1990s has produced a singular and influential body of work that probes the relationship between the mechanics of seeing, image-making processes, and modes of display. The first mid-career survey dedicated to Deschenes’s work, this exhibition will feature 20 years of her art, including explorations of various photographic technologies and the symbolic power of color, rich and nuanced work with photograms (a type of photographic image made without a camera), and sculptural installations that reflect the movements and light within a given space and respond to a site’s unique features. The artist will be creating a striking site-specific work comprised of 20 silver reflected photographic panels which will hang directly on the glass in the ICA’s John Hancock Founder’s Gallery overlooking Boston Harbor.

First Light: A Decade of Collecting at the ICA
AUG 17, 2016 – JAN 16, 2017
Coinciding with the ten-year anniversary of ICA’s move to its iconic waterfront building, this exhibition will celebrate the museum’s first decade of collecting. Drawn entirely from ICA’s collection and featuring multiple thematic, artist-specific, and historical sections, the exhibition will bring together both new acquisitions and favorites from the permanent collection. Conceived as a series of interrelated and rotating stand-alone exhibitions, this presentation will highlight major singular works from the collection, such as a newly acquired monumental cut-paper silhouette tableau by Kara Walker, as well as the Barbara Lee Collection of Art by Women, groupings of work by artists held in depth such as Louise Bourgeois and Nan Goldin, and thematic and art-historical groupings. A new multimedia web platform will be created to mark the occasion.

ONGOING
Geoffrey Farmer
THROUGH JULY 17, 2016
Geoffrey Farmer (b. 1967, Vancouver) is best known for his installations and large-scale, sculptural photo collages. This immersive survey of the artist’s recent major “paper works” presents room-sized installations composed of hundreds of small sculptures made of cutout photographs, fabric, and various supports. In these recent works, processions of figures assembled from fragments of book and magazine photography and illustration manifest the artist’s interest in the cross-pollination of historical and vernacular imagery. Each spectacular composition begins to chart the historical contours of our image-saturated contemporary culture, and suggest the recurring cultural themes and formal patterns. Farmer uses movement, sound, animation, puppet characters, and a panoply of highly choreographed bodies and characters to investigate world history from the different angles of its photographic and sculptural accounts.

Acknowledgments
Summer Stages @ICA is made possible, in part, with the support of George and Ann Colony and The Aliad Fund.
ICA First Fridays are sponsored by Citizens Bank.

Support for Nalini Malani: In Search of Vanished Blood is generously provided by Vivien and Alan Hassenfeld, Jodi and Hal Hess, and Barbara Lee.

Support for Liz Deschenes is generously provided by Edward Berman and Kathleen McDonough, Robert and Jane Burke, Fotene Demoulas and Tom Coté, Bridgitt and Bruce Evans, James and Audrey Foster, Ted Pappendick and Erica Gervais Pappendick, David and Leslie Puth, and Mark and Marie Schwartz.
First Light: A Decade of Collecting at the ICA is sponsored by Christie’s.