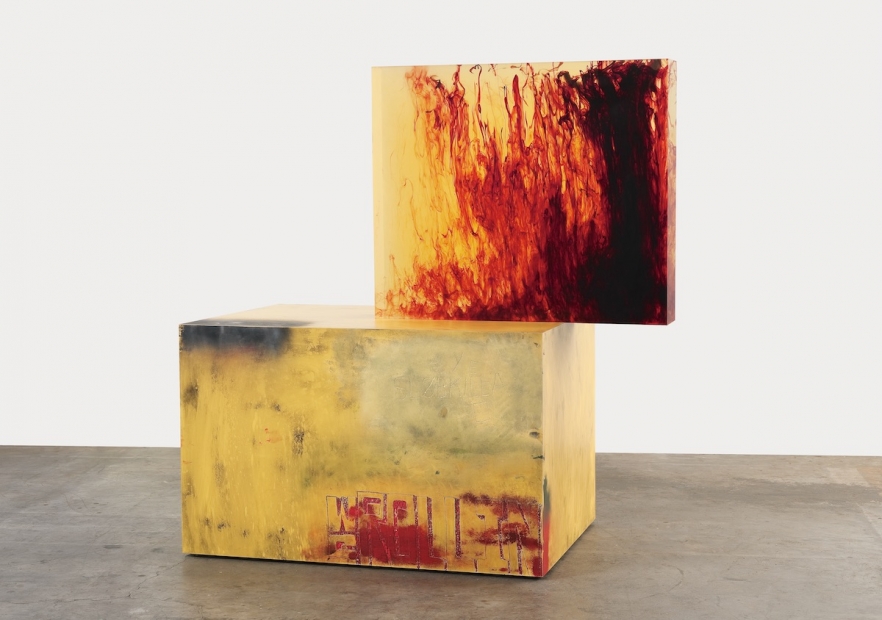 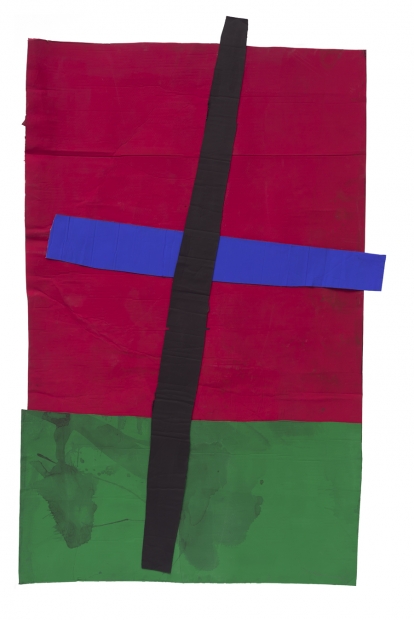 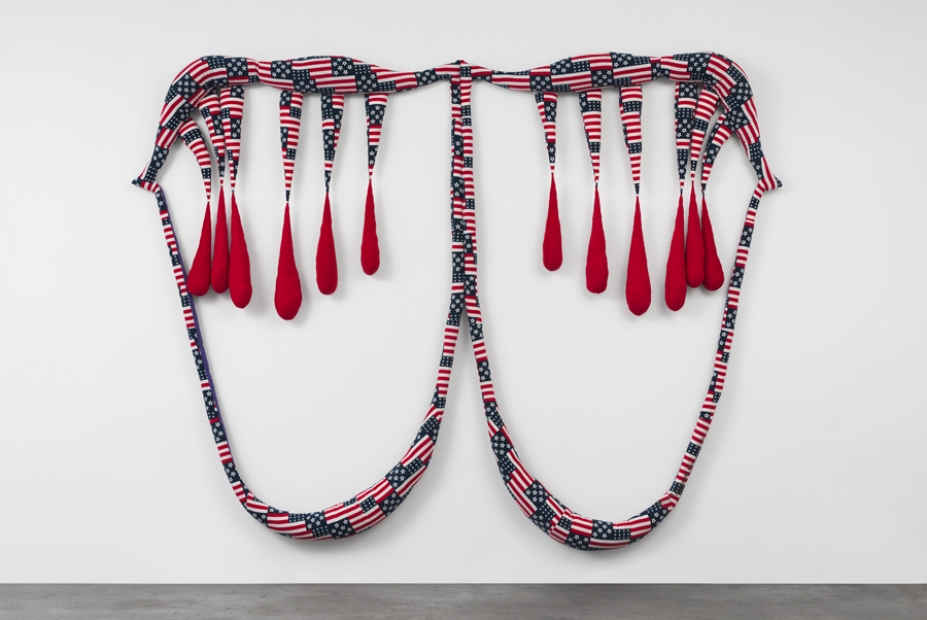 (Boston, MA—December 18, 2019) The Institute of Contemporary Art/Boston (ICA/Boston) and the Institute of Contemporary Art, Miami (ICA Miami) have co-organized Sterling Ruby, the most comprehensive museum survey of American/Dutch artist Sterling Ruby (b. 1972) to date. Opening at the ICA/Boston on February 26, 2020 after a three-month run at the ICA Miami, the survey brings together more than 70 works for the first time to demonstrate the relationship between material transformation in Ruby’s practice and the rapid evolution of contemporary culture, institutions, and labor. Spanning more than two decades of the artist’s career, the exhibition looks to the origins and development of his practice, through mediums ranging from lesser-known drawings and sculptures to his renowned ceramics and paintings. Sterling Ruby is organized by Eva Respini, Barbara Lee Chief Curator, ICA/Boston, and Alex Gartenfeld, Artistic Director, ICA Miami, with Jeffrey De Blois, Assistant Curator and Publications Manager, ICA/Boston. The exhibition will be on view at the ICA/Boston February 26 through May 26, 2020. It is on view at ICA Miami from November 7, 2019 through February 2, 2020.

“Ruby’s work embraces America’s icons, from the Stars and Stripes to craft culture, even as it delves into the dark forces at play today. It addresses a wide range of issues—from the political underbelly of the landscape to material investigations of handmade traditions—and in the process, Ruby reexamines notions of beauty, value, and the history of sculpture itself. Ruby’s uneasy combinations of materials, forms, and ideas offer the perfect analogy for our agitated times,” said Eva Respini, the ICA/Boston’s Barbara Lee Chief Curator.

“Though Sterling Ruby is distinguished for his prolific and experimental studio practice, there are many pressing thematic elements of his work that have yet to be fully considered,” said Alex Gartenfeld, ICA Miami’s Artistic Director. “By tying together the evolution of Ruby’s innovations in production and the development of his fascination with American culture, the exhibition proposes new ways to consider Ruby’s impact. Since our new permanent home opened in 2017, this is the first solo exhibition to span two full floors of the museum – offering an opportunity to explore Ruby’s practice in greater depth than ever before, including some of his earliest and rarely-seen works.”

Since his earliest works, Ruby has investigated the role of the artist as outsider. Critiquing the structures of modernism and traditional institutions, Ruby addresses the repressed underpinnings of U.S. culture and the coding of power and violence. Craft is central to his inquiry, as he explores California’s radical ceramics history to traditions of Amish quilt making, shaped by his upbringing in Pennsylvania Dutch country. The process of combining disparate elements is central to Ruby’s material reclamations, which serve as a form of autobiographical and cultural archeology. Organized loosely by chronology and medium, Sterling Ruby considers the artist’s explorations of these themes across the many materials and forms he has utilized throughout his practice.

Sterling Ruby begins with the artist’s early collages, drawings, and prints, which continuously explore the personal and cultural subconscious. These early works, including Crystal Cryer (2001) and Transient Bed of John (2003), trace the origins of the complex visual language that has come to define Ruby’s oeuvre. Further exemplifying the artist’s interest in craft, Sterling Ruby includes a selection of the ceramics for which he is widely known. Influenced by his mother’s collection of pottery and dishware, Ruby’s ceramics represent the artist’s probing of figurative forms, gesture and immediacy, and display hand-worked characteristics, but are not intended to serve functional purposes.

Throughout his career, Ruby has often employed two-dimensional mediums to elaborate on recurrent subjects including the nation’s prison-industrial complex and maximum-security prisons. In a large series of works, among them Prison (2004), Ruby combines images of prisons and pastes them on top of orange paper, referencing the color of correctional facility uniforms. The exhibition additionally considers the tension of expression and repression, particularly through Ruby’s monumental urethane works, which he began making in response to the scale limitations of ceramics. For the artist, these sculptures serve to disrupt the minimalist structures of museums—another perceived product of institutionalization. The exhibition includes several works from Ruby’s Monument Stalagmite series, towering sculptures created by a time and labor-intensive process. This includes Monument Stalagmite/The Shining (2011), which features dripped red dye that takes on the appearance of blood and refers to an iconic scene in Stanley Kubrick’s film adaption of Stephen King’s novel The Shining (1980).

Another of Ruby’s signature materials, spray paint, is present across several series and represents the artist’s blurring of high and low culture. Influenced by graffiti culture, works from the artist’s series of monumental spray-painted canvases, entitled SP, are reminiscent of landscapes—frequently evoking sceneries plagued by environmental destruction.

Ruby’s soft sculptures—formed from various fabrics stuffed with fiberfill—occupy a complex place within the artist’s practice, invoking craft and flag-making as well as horrific cartoons. As a result of growing up in a family of seamstresses and his early exposure to quilting communities in rural Pennsylvania, Ruby began reusing scraps of leftover textiles to create his QUILT and FLAG series. The exhibition places these works in dialogue with other soft sculptures fashioned from American-flag patterned fabric, including DOUBLE CANDLE (6992) (2019) and Double Vampire 14 (2013). A new work created from this fabric, entitled FIGURES. PILE. (6991) (2019), comprises a pile of interwoven figures that appear as a monumental corpselike form.

The exhibition additionally features Ruby’s metal works, including his MS series—architectural monuments that invoke violence through their gun-like forms. Made from scrap sheet metal and rebar, these forms further demonstrate Ruby’s ethos of material reuse. Also included are Ruby’s STOVES, drawing inspiration from his childhood experience of tending his family’s wood-burning stove, as well as from foundry workers’ furnaces.

Concluding the exhibition are examples from Ruby’s series, ECLPSE and SCALES, both of which reuse residual materials found throughout Ruby’s studio. These series are examples of Ruby’s interest in reviving modernist art visuals and infusing them with reused items. For instance, SCALE (4586) (2013) and SCALE (5415) S.R. CLOR. (2015) feature everyday objects both altered and found, such as cardboard boxes, plastic bottles, and bleach-splattered jeans, installed as a mobile—a form associated with modern artist Alexander Calder. Taking up classic tropes of modernism throughout his work, Ruby aims to intervene in historical forms of image making and manufacture in order to test their urgency today.

Sterling Ruby is accompanied by an illustrated scholarly catalogue edited by Alex Gartenfeld and Eva Respini, with an interview by Isabelle Graw. Published with DelMonico Prestel, the catalogue features essays that consider Ruby’s work amidst the contemporary art production and visual culture of the last 30 years. The exhibition catalogue is available for purchase at the ICA Store.

Sat, Apr 18, 2020, 2 PM
Sterling Ruby and Virgil Abloh, exhibiting artists at the ICA this season, have broken barriers and notions of how and where today’s contemporary artists can or should work. In this special program, Ruby and Abloh come together to discuss their work, backgrounds, and influential creative practices that transcend any one discipline, crossing into art, fashion, design, and more. Hear more about the artists’ highly anticipated exhibitions at the ICA in this free public talk, moderated by Eva Respini, Barbara Lee Chief Curator at the ICA.

Sterling Ruby is a leading contemporary artist whose work has been presented in solo exhibitions at Museum of Contemporary Art, Los Angeles (2008); Galleria d’Arte Moderna e Contemporanea, Bergamo (2008 – 2009); Museo d’Arte Contemporanea, Rome (2013); Baltimore Museum of Art, Maryland (2014); and at the Belvedere, Vienna (2016); among many others.

Ruby graduated in 1996 from the Pennsylvania School of Art and Design, Lancaster. Ruby received his B.F.A. in 2002 from the School of the Art Institute of Chicago, Illinois, and his M.F.A. in 2005 from the Art Center College of Design, Pasadena. Born in 1972 on Bitburg Air Base in Bitburg, Germany, he currently lives and works in Los Angeles.

About the Institute of Contemporary Art/Boston

About the Institute of Contemporary Art, Miami

The Institute of Contemporary Art, Miami (ICA Miami) is dedicated to promoting continuous experimentation in contemporary art, advancing new scholarship, and fostering the exchange of art and ideas throughout the Miami region and internationally. Through an energetic calendar of exhibitions and programs, and its collection, the ICA Miami provides an important international platform for the work of local, emerging, and under-recognized artists, and advances the public appreciation and understanding of the most innovative art of our time.

Launched in 2014, ICA Miami opened its new permanent home in Miami’s Design District on December 1, 2017. The museum’s central location positions it as a cultural anchor within the community and enhances its role in developing cultural literacy throughout the Miami region. The museum offers free admission, providing audiences with open, public access to artistic excellence year-round.