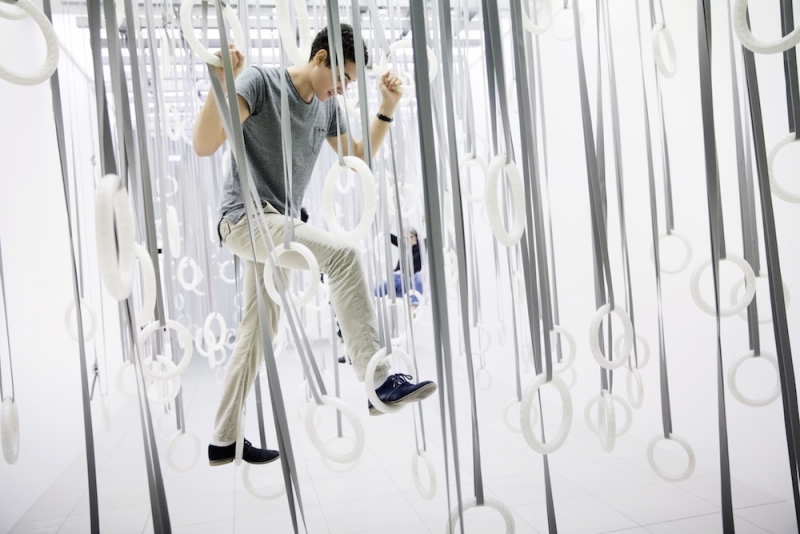 (Boston, MA—July 27, 2018) On October 31, the Institute of Contemporary Art/Boston (ICA) opens the first comprehensive U.S. exhibition of celebrated artist and world-renowned choreographer William Forsythe. Spanning over two decades of Forsythe’s work, this major exhibition includes room-size interactive sculptures, participatory objects, and video installations. Since the 1990s, parallel to his stage productions, Forsythe has developed site-responsive, interactive works that are designed to stimulate movement and invite the viewer to confront and engage with the fundamental principles of choreography. Forsythe calls these works Choreographic Objects. Via the artist’s instructions for action posted on the wall next to the works, visitors are encouraged to move freely through the performative exhibition and generate an infinite range of individual choreographies. In shifting choreographic thinking from the trained dancer to the layperson, and from the stage to the gallery, Forsythe emphasizes that choreography is possible everywhere. On view October 31, 2018 through February 21, 2019, William Forsythe: Choreographic Objects is organized by Eva Respini, Barbara Lee Chief Curator, with Jeffrey De Blois, Assistant Curator.

“In this sweeping survey, William Forsythe presents movement and gesture as a mindful and expressive act for all human beings,” said Jill Medvedow, the ICA’s Ellen Matilda Poss Director. “Forsythe’s work is inspiring, generous, and empowering. The ICA is proud to present the artist’s first comprehensive solo museum exhibition in the United States.”

“Forsythe goes beyond the innovations of avant-garde dance and performance art to query the relationship between performer and audience,” said Respini. “Through the medium of choreography, he explores ideas that resonate with some of the most daring artistic experiments of the past fifty years. His overarching proposition is radical in the way that it alters our understanding of the body as a material to be molded within the public sphere.”

Forsythe is counted among the foremost choreographers of our time. For over four decades, he has created productions that redefine classical ballet’s vocabulary, and his groundbreaking approach to choreography, staging, lighting, and dance analysis has influenced countless choreographers and artists. William Forsythe: Choreographic Objects coincides with Forsythe’s long-term partnership with Boston Ballet. On March 7, 2019, Boston Ballet will debut his first world premiere created on an American company in over two decades at the Boston Opera House as part of the Full on Forsythe program, presenting a unique opportunity for audiences to experience the full range of Forsythe’s pioneering body of work—both in the galleries and on stage.

Exhibition Highlights
The exhibition presents large-scale installations, objects, and videos, encompassing several aspects of movement and audience participation. Forsythe’s Choreographic Objects fall into three broad categories: large-scale interactive installations that invite viewers to move through an environment; smaller-scale sculptures that engage them in a haptic, or tactile, experience; and video-sculptures where the body is the sole sculptural element. Each work answers the driving question posed by Forsythe ‘What could physical thinking look like?’ in a different way, and each visitor answers it in their own deeply personal way. Several works have been developed in response to the architecture of the ICA.

Catalogue
The exhibition is accompanied by a richly illustrated publication, co-published with Prestel Publishing/Delmonico Books, which will be an important resource and scholarly contribution. The publication features major essays by writers from the disciplines of both art and dance, including Respini, Roslyn Sulcas, Rebecca M. Groves, Daniel Birnbaum, Susan Leigh Foster, Molly Nesbit, as well as a conversation between Forsythe and co-editor Louise Neri.

The Artist’s Voice: William Forsythe
Thursday, February 21, 7 PM
In this public program, Forsythe will be in conversation with Barbara Lee Chief Curator Eva Respini about his artistic practice, choreographic objects, physical thinking, and problem solving in his work. Event is free, but tickets are required.

About the Artist
William Forsythe was born in New York in 1949, and resides in Vermont. Trained in classical ballet in Florida and New York, Forsythe joined the Stuttgart Ballett in 1973 and went on to direct the Ballett Frankfurt for twenty years. He directed the smaller, more specialized The Forsythe Company, in Frankfurt and Dresden, from 2005 to 2015. His Choreographic Objects have been exhibited internationally in venues such as Tate Modern’s Turbine Hall, London, the Venice and Sydney Biennales, La Villette/Grande Halle, Paris as part of Festival d’automne, and museums such as Wexner Center for the Arts, Columbus, Ohio; Museum für Moderne Kunst, Frankfurt, Germany; and Hayward Gallery, London. He has received numerous awards and was honored with the Golden Lion for Lifetime Achievement at the Venice Biennale in 2010.

Additional support is generously provided by Edward Berman and Kathleen McDonough and Paul and Catherine Buttenwieser.

About the ICA
An influential forum for multi-disciplinary arts, the Institute of Contemporary Art/Boston has been at the leading edge of art in Boston for 80 years. Like its iconic building on Boston’s waterfront, the ICA offers new ways of engaging with the world around us. Its exhibitions and programs provide access to contemporary art, artists, and the creative process, inviting audiences of all ages and backgrounds to participate in the excitement of new art and ideas. The ICA, located at 25 Harbor Shore Drive, is open Tuesday and Wednesday, 10 AM–5 PM; Thursday and Friday, 10 AM–9 PM (1st Friday of every month, 10 AM–5 PM); and Saturday and Sunday, 10 AM–5 PM.  Admission is $15 adults, $13 seniors and $10 students, and free for members and children 17 and under. Free admission for families at ICA Play Dates (2 adults + children 12 and under) on last Saturday of the month. For more information, call 617-478-3100 or visit our website at www.icaboston.org. Follow the ICA at Facebook, Twitter, and Instagram.