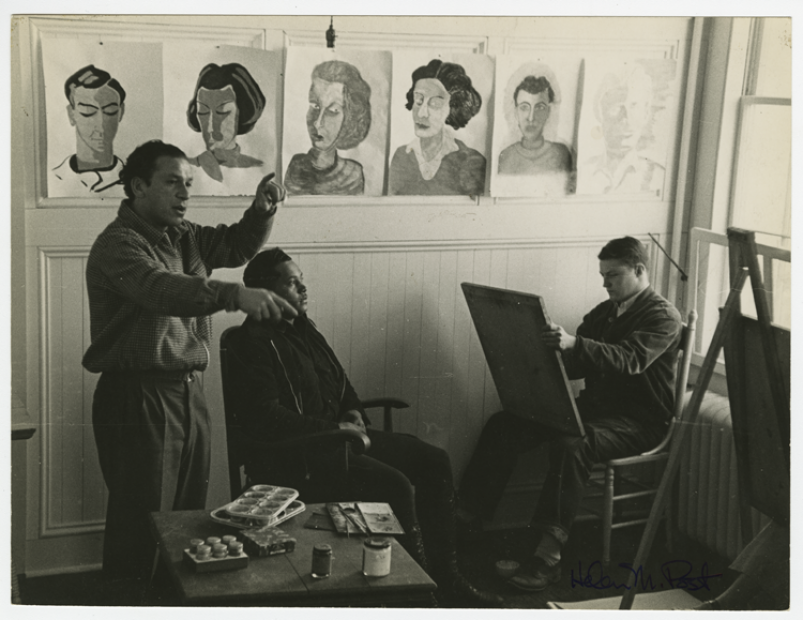 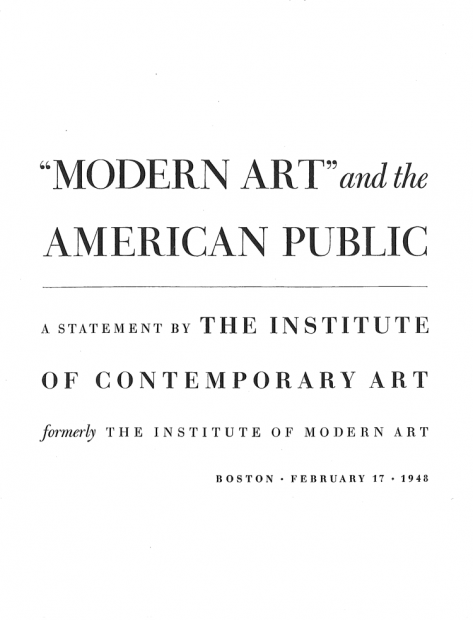 From Modern to Contemporary

As we near the opening of the ICA’s major exhibition Leap Before You Look: Black Mountain College 1933–1957, a number of people are asking me “why?” and “how?”

“Why?” is the ICA, a museum dedicated to contemporary art and artists, organizing an exhibition on Black Mountain College (BMC)—a small experimental college that operated in the hills outside Asheville, North Carolina, from 1933 to 1957?

And “how?” is BMC relevant to today’s discussions on culture, education, citizenship, and democracy?

The answers are in the ICA’s own history. The ICA was founded in 1936, just three short years after Black Mountain College was established. From the outset, the ICA was a renegade in its total embrace of the art of its time and in its belief that a progressive and liberal plurality of the arts was essential to a thriving culture/civic life. Black Mountain College was founded with a similar philosophy, which insisted on the centrality of artistic experience to preparing students for full participation in our democratic society. Now, almost 90 years later, experimentation, interdisciplinarity, collaboration, risk and failure, and experiential learning—key tenets of both BMC and the ICA—are central to conversations in education reform, workforce development, creative economies, innovation, and placemaking.

The ICA decided to organize the exhibition Leap Before You Look: Black Mountain College 1933–1957 to explore and understand the enormous and outsized influence this tiny experimental college wielded on postwar culture in the United States. Not only do the BMC years chart the move from modern to contemporary art in the 20th century, many of the ideas incubated there pervade contemporary art now. The global influences this exhibition reveals as central to Black Mountain College—from Asia, through John Cage and Ruth Asawa; from Latin America, through the travels of Josef and Anni Albers; from Europe, through the artists who fled Nazi Europe—created what exhibition curator Helen Molesworth calls a cosmopolitanism of ideas, artists, and individuals.

The title Leap Before You Look reflects the daring spirit of experimentation that defined BMC and that permeates the ICA today.”

In the BMC community, experiments in mixed media, assemblage, dance, found sounds and objects, architecture, photography, and film challenged the dominant tropes of painting and sculpture. The first “happening” occurred at Black Mountain College with Theater Piece No. 1, which is being reimagined at the ICA this fall. Merce Cunningham collided with John Cage and Robert Rauschenberg, and incorporated chance procedures and visual art into his work (his 1957 piece Changeling will be performed in our galleries throughout the exhibition). The art of assemblage—Rauschenberg’s first designated Combine painting was made there—and the pioneering aesthetics of collage and found materials are evident in Stan VanDerBeek’s films, and in Cage’s use of everyday sounds.

The title of the exhibition—Leap Before You Look, taken from a poem by W.H. Auden—reflects the daring spirit of experimentation that defined BMC and that permeates the ICA today. The ICA has long embraced the porousness between architecture, visual arts, dance, media, and the presentation of pioneering and emerging artists in its exhibitions. Equally important, the ICA echoes the educational pedagogy of Black Mountain College in dedicating itself to arts education as a strategy to invest in our future artists, audiences, and electorate as well as a more equitable education for urban youth. Through immersive art-making courses, interactions with visiting artists, and a shared responsibility for peer programs, teens experience learning by doing at the ICA—a critical aspect of BMC as well.

Leap Before You Look: Black Mountain College 1933–1957 is an overdue and sweeping project, including 281 objects, archival materials, in-gallery dance and music, a comprehensive catalogue, symposia, course curricula, and a digital library of timelines and readings. It presents original scholarship on a key period in 20th-century cultural history that encourages us to think deeply about learning and community, culture and collaboration, experimentation and interdependence, and the world we could create anew. With this exhibition, the ICA takes a magnificent leap, celebrating the move from modern to contemporary, connecting the past to the present and, we hope, opening a vision for the future.