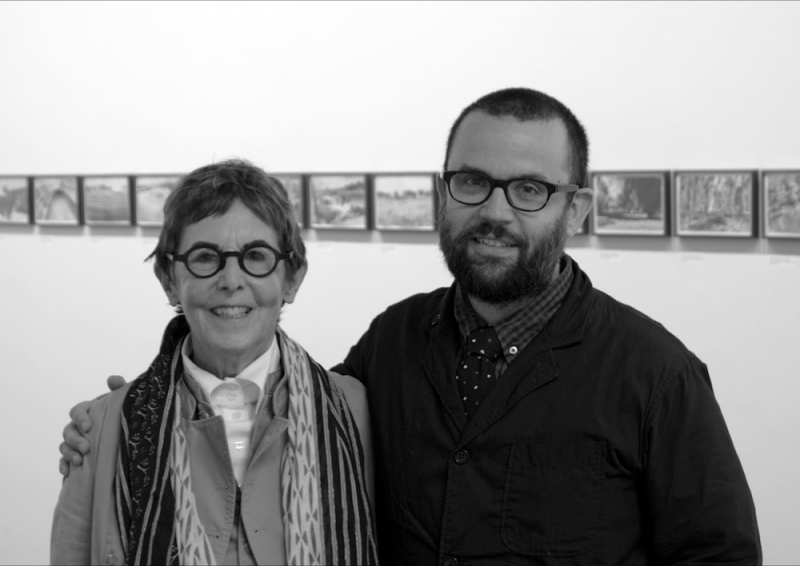 A New Direction, An Incomparable Past

This month, after 34 years, the Barbara Krakow Gallery formally became the Krakow Witkin Gallery, remaining in its longstanding location on the 5th floor of 10 Newbury Street in Back Bay. The name change recognizes the close partnership of Barbara Krakow and Andrew Witkin, who have worked together for 18 years, and as partners for the past 14, as well as signaling Witkin’s leadership for the future. Together, this dynamic team has created an exhibition program focused on conceptual and minimal art of the late 20th and 21st centuries; published catalogue raisonneés of the prints of Sol Lewitt, Kiki Smith, Donald Sultan, and Elizabeth Murray, as well as forthcoming publications on Mel Bochner and Liliana Porter, and have used their expertise and patience to build relationships and collections across Boston.

This, then, is an opportune moment to recognize the transformation of contemporary art in Boston and the role played by Barbara Krakow in this evolution. She is Boston’s most celebrated art dealer, as renowned for her critical eye as she is for her role as a champion of and educator in contemporary art. Two generations of Bostonians have learned from her and her exhibitions. Many have built their collections on her advice and service, establishing significant holdings of contemporary art in Boston-area homes and institutions. Others have received the equivalent of an art history degree from her – walking with her through the small gallery space, studying individual works to focus and exercise the art of looking. Still others have come for advice and conversation, seated in her office on one of two Mies van der Rohe chairs, her feet up on a Frank Gehry footstool, surrounded by her extensive library of books and drawing on her extensive knowledge of Boston and the world of art and artists. A sampling of the artists to whom she is committed charts a survey of key moments in recent art history: Josef Albers, John Baldessari, Bernd and Hilla Becher, Daniel Buren, Robert Cottingham, Tara Donovan, Dan Flavin, William Kentridge, Annette Lemieux, Allan McCollum, Stephen Prina, Kay Rosen, Kate Shepard, Lorna Simpson, Shelburne Thurber, Suara Welitoff and many, many more.

In the 34 years since Krakow began her eponymous gallery, Boston has transformed from a contemporary art backwater into the lively city it is today. Krakow estimates that from a few contemporary art venues in 1983, greater Boston has now grown to boast 150 active in the area. Much attention has been paid to the influx of new museum directors, and we are all the beneficiaries of new leadership at the MFA, Gardner Museum, Harvard Art Museums, deCordova, and now Tufts and the Rose. Talented new curators, too, have enlivened Boston’s art scene. There are also new entrepreneurial endeavors, advocacy campaigns led by Mass Creative, and renewed energy in contemporary dance, with William Forsythe’s five-year residency at the Boston Ballet and Peter DiMuro’s revival at the Dance Complex, as well as new initiatives and spaces under design at the Huntington and the A.R.T. David Howse at Emerson brings performance-based work from around the world, and the BSO and Andris Nelsons champion new music in Boston and at Tanglewood. But the change is more than a list of names and places. Important contemporary collections have been created; art schools have grown, moved and merged; each of the city’s art museums has built and expanded; and committed philanthropists and strong Boards of Trustees, Advisors and Overseers have been built. Boston is beginning to be a place as committed to the future of art as it is to its past.

You are likely to see Barbara Krakow and Andrew Witkin at all our museums and performance venues, but Krakow’s influence is not restricted to Boston. Adam Sheffer, director of the prestigious Cheim & Read Gallery in New York and president of the Art Dealers Association of America, has known Barbara since he was a young man growing up in Wellesley, Massachusetts. As he puts it, “No one has brought the global art world to Boston and Boston to the global art world quite like Barbara. Together with Andrew, she has added immeasurably to Boston’s artistic legacy and, without question, to its future as a vital center for the art of our time.”

Much of Krakow’s reputation has been built on the strong relationships she has had with some of the most important artists of the late 20th century. Sol Lewitt, Fred Sandback, and Mel Bochner were close friends of Barbara and represented by the Gallery. Jenny Holzer, Julian Opie, and Liliana Porter are consistent presences on the gallery’s exhibition schedule. Equally important, Barbara’s clients and associates have benefitted from her deep and prolonged exploration of works of art, and her willingness and desire to talk to anyone with curiosity about the practice and philosophy of art.

As the Barbara Krakow Gallery enters its new iteration as the Krakow/Witkin Gallery, it is fitting to recognize Barbara’s contribution and the history of contemporary art that she has helped shaped in and for Boston. As the beneficiary of hours of advice, counsel, and friendship both personally and through Barbara’s work for the ICA as a longstanding member of our Advisory Council, I value the education on art that I have received. Even more important, I cherish the wisdom of her experience; the value she places on integrity, relationships, and hard work; and the deep and lasting commitment she has made to Boston. I can’t wait to see what she and Andrew will undertake together.