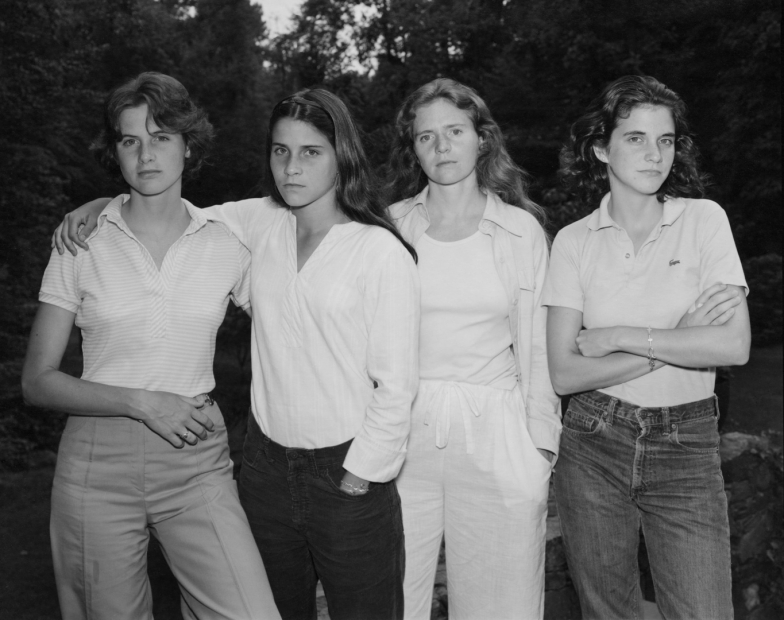 Nicholas Nixon: Persistence Of Vision On View December 13 at ICA/Boston

This December, the Institute of Contemporary Art/Boston (ICA) opens Nicholas Nixon: Persistence of Vision, a survey of the Boston-based artist’s prolific career. Including 113 works, the exhibition is organized around Nixon’s remarkable ongoing project The Brown Sisters, a series of group portraits of his wife and her three sisters taken annually since 1975. The Brown Sisters will be presented in its entirety—including a new portrait from 2017 making its U.S. debut—and each portrait will be paired with other photographs made by Nixon in the same year, drawn from various bodies of work. Together these pictures allow viewers to both take in the visual sweep of passing time through The Brown Sisters series, and delve more deeply into each year through close looking. Accompanying the exhibition is an extensive audio guide narrated by the artist, giving audiences insights into the various bodies of work completed by Nixon over the last four decades. The exhibition is organized by Eva Respini, Barbara Lee Chief Curator, with Jessica Hong, Curatorial Associate, and will be on view from December 13, 2017 through April 22, 2018.

“In his numerous series, Nixon gets to know his subjects while photographing them, making the role of time, inherent to the medium of photography, an integral part of the content and process of his work,” says Respini. “Amidst today’s increasingly frenetic pace of life and digitally mediated social relations, Nixon’s pictures invite us to slow down, look, and reflect on the nature of human relationships.”

Other works in the exhibition include, among others, additional family photographs; self-portraits; images from his hallmark series of people with AIDS or near death; studies of students at schools such as the Perkins School for the Blind outside of Boston or his son’s elementary school in Cambridge, MA; and Boston cityscapes.

Working exclusively on film, Nixon uses a large format 8x10 inch camera, affording his pictures an unparalleled clarity of detail and description.  He often photographs his subjects at close range, encouraging a sense of intimacy in the act of photographing and looking. Organized in collaboration with the artist, the selected photographs demonstrate the breadth of Nixon’s practice and dedication to revealing the incredible moments in the everyday. Together with The Brown Sisters, these compelling pictures are a testament to Nixon’s persistence of vision.

About the artist
Based in Boston since the 1970s, Nicholas Nixon was born in Detroit, Michigan, in 1947. The artist earned a B.A. from the University of Michigan in 1969 and an M.F.A. from the University of New Mexico in 1975. He has been awarded three National Endowment for the Arts Fellowships and two Guggenheim Fellowships. Recent solo exhibitions have been held at the Museum of Modern Art in New York (MoMA) (2014/2006), the Museum of Fine Arts, Boston (2010), the Modern Art Museum of Fort Worth, Texas (2006), the National Gallery of Art in Washington, D.C. (2005), and the Cincinnati Art Museum (2005). His work is included in the collections of the Metropolitan Museum of Art, the MoMA in New York, the San Francisco Museum of Modern Art, and the Museum of Fine Arts in Boston, among many others. The ICA presented exhibitions of Nixon’s work in 1982, Nicholas Nixon’s New Contact Prints, and in 1983, Nicholas Nixon: Photographs From One Year, and has also collected his work.

About the ICA
An influential forum for multi-disciplinary arts, the Institute of Contemporary Art/Boston has been at the leading edge of art in Boston for 80 years. Like its iconic building on Boston’s waterfront, the ICA offers new ways of engaging with the world around us. Its exhibitions and programs provide access to contemporary art, artists, and the creative process, inviting audiences of all ages and backgrounds to participate in the excitement of new art and ideas. The ICA, located at 25 Harbor Shore Drive, is open Tuesday and Wednesday, 10 AM–5 PM; Thursday and Friday, 10 AM–9 PM (1st Friday of every month, 10 AM–5 PM); and Saturday and Sunday, 10 AM–5 PM.  Admission is $15 adults, $13 seniors and $10 students, and free for members and children 17 and under. Free admission for families at ICA Play Dates (2 adults + children 12 and under) on last Saturday of the month. For more information, call 617-478-3100 or visit our website at www.icaboston.org. Follow the ICA at Facebook, Twitter, and Instagram.