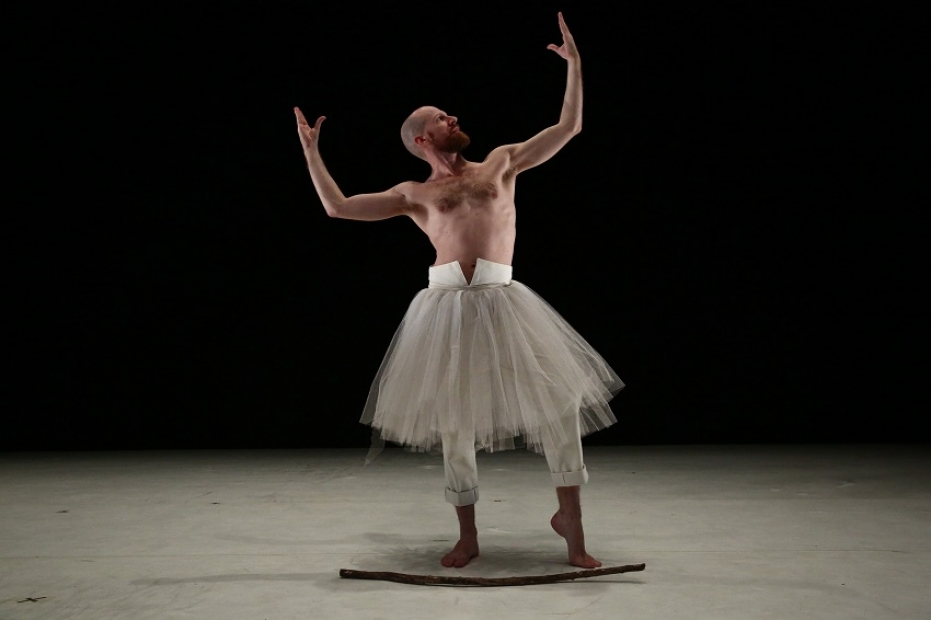 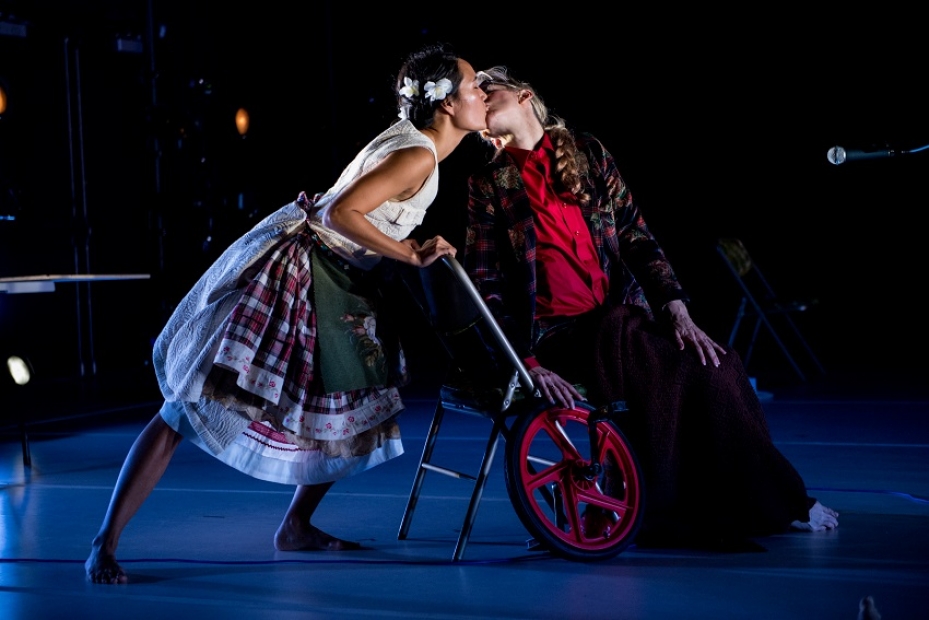 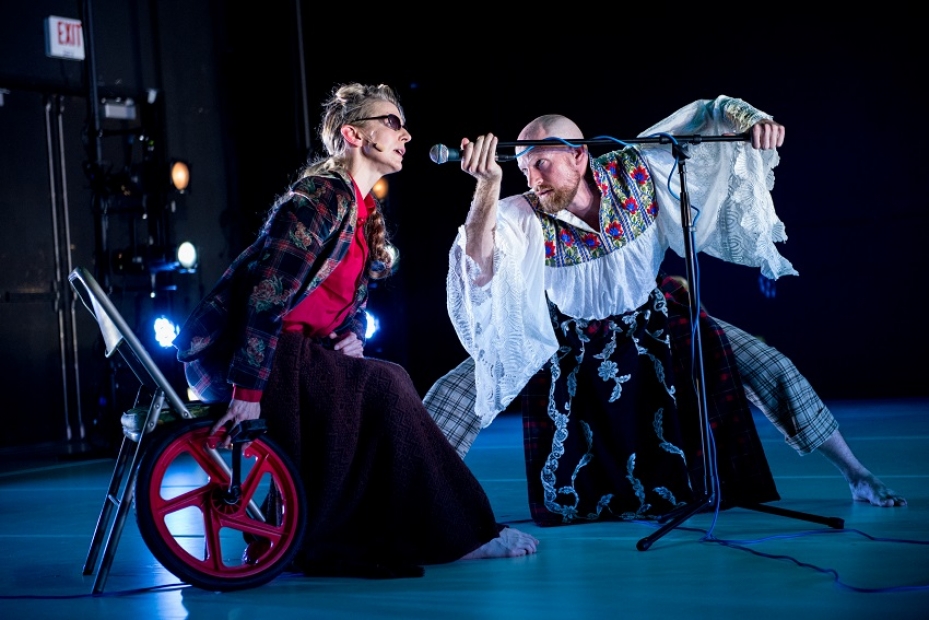 From interpreting classical Greek plays to choreographing for David Bowie and David Byrne, iconoclast Annie-B Parson creates work like none other.

If you don’t know Annie-B Parson, you should. In addition to 25 years co-directing the New York-based company Big Dance Theater with artistic and life partner Paul Lazar, the consummate innovator has choreographed David Byrne’s musical Here Lies Love and the David Bowie musical Lazarus; created movement for marching bands, choruses, and inanimate objects; and developed a unique blend of dance, literature, and theater that is as incisive as it is irresistible.

Parson sat down with the ICA in advance of Big Dance Theater’s presentation of their 25th-anniversary celebration Short Form to talk inspiration, process, not selling your audience short, and what makes her “art heart” weep.

Short Form is a program of five short pieces celebrating your 25th anniversary, but the works are new, yes? How did you choose this approach?

The dances were, by and large, new work when they premiered at the Kitchen in January. However, the final piece on the program, Goats, was a favorite work that Paul Lazar and I made for another company years back and wanted to revisit. I revised it based on my experiences working in the theater since the original production, and tailored it for Big Dance.

It occurred to me, after sitting through many, many shows in downtown dance, that they all run roughly about the same length, and I wanted to disrupt that aspect of form. And, I had been reading very short fiction that seemed rooted in both poetic forms and our contemporary attention span. I found the short form compelling—it has different operating principles—so, I challenged myself to create works that are granular, brief—a short story rather than a tome. I got really involved in all things short for a little while.

Was it more or less difficult than you expected?

It’s very difficult. In fact, I don’t think I’ve mastered it, but I enjoyed this period! It felt I was drawing rather than painting; the scale is lithe and flexible. However, I think I more organically understand how to develop materials and ideas over an hour-to-two-hour piece. Duration, it turns out, is personal.

There are few authors who are masters of both the long and short form. Chekhov always wrote short pieces—he never wrote a novel. His novellas are my favorite works of his. I think Balanchine also worked best at a certain scale. Of course he made long-form pieces; we know them well. But he was a master at making the 15-to-20-minute piece.

Duration, it turns out, is personal.

Big Dance Theater is celebrating its 25th anniversary. How did you come to develop the company’s particular language straddling dance and theater back in 1991?

I was a young choreographer who trained in dance, and then I was asked by a theater company to choreograph for them. I stepped into three roles with this group that were formative: co-director/sound designer/choreographer—all in one—this combination of generative roles became central to my young voice. At the time, I didn’t know much about theater, but I knew my Balanchine, Cunningham, Judson Church…honestly, I had never really been interested in plays. Dance people can be quite sequestered in their art.

At that moment, Pina Bausch came to town—I think these were her first pieces at BAM in the early 1980s. It was fascinating to see how she affected the dance community, because she really shakes down from a different family tree than the tree we were falling from. We were more like the children of the Judson Church family tree, where we prized pedestrianism, the prosaic, and the anti-theatrical. Before Pina, NYC was inventing a virtuosity of structure. And there comes Pina, with her costumes and her gigantic sets and her sense of Theater with a capital “T”! Off came the ubiquitous drawstring pants and I swear, for a while I saw lots of evening gowns and high heels on the downtown stages.

It was a really interesting moment, and I was very affected by Pina Bausch, both structurally and theatrically, as I was just starting. I didn’t notice that I was blending things—I was just playing out my imagination. I didn’t really think that I was living on this cusp between dance and theater. I never really thought about it. But I was certainly borrowing theatrical elements: character, causation, relationship, and mixing them with dance structures, yet always avoiding the straight-up narrative form of story ballet, or plays that tell stories and suggest moralities.

I didn’t notice that I was blending things—I was just playing out my imagination.

Has the company’s tone or practice significantly changed over the 25 years?

It has. Some of that has to do with Paul [Lazar]: after I made the first couple large-scale pieces, he started to co-direct with me. He came from the theater tradition, and that perspective affected the work, of course. With Paul, we straddled the worlds of dance and theater more than ever, and sometimes even did plays. I wouldn’t have done a play on my own, but I was a dancer interested in literature—so it was exciting. Before he came in, I had made pieces that theatricalized and borrowed from literature (Flaubert, Pinter, the Greeks) but Paul brought in ideas around how to perform the self on stage, as well as how to technically approach text, and this changed the character of the work.

In the past 25 years we have had the incredible good fortune to tangle with some extraordinary literature: Euripides, Chekhov, Anne Carson, Flaubert, Twain, Tanizaki, Sibyl Kempson, Mac Wellman—and “found” text is one of our favorite authors!

Yet dance remains the sacred object in the room. In Short Form, one of the things I wanted to do was return to making some pieces that are dance-based, simply. I hadn’t done that in a long, long time.

You’ve mentioned sensing audience discomfort with abstraction and non-narrative work. What can artists or presenting organizations like the ICA do to help audiences feel more comfortable with this kind of work?

You’re asking the wrong person! I am really not supportive of hand-holding. Maybe the best thing we could do is warm up the audience with a vaudeville act—or karaoke!

When the audience feels alert, their imaginations kick in, they wake up. Or, from a more intellectual perspective, presenting ideas around how to think about abstraction, and what abstraction is made up of, is helpful—not in terms of a particular work, like, “this is what the artist thinks they’re doing”—but concepts around abstraction and how it’s present in our world all the time. I’m looking at three lampshades right now, and you could say their relationship is non-narrative, so it’s abstract. Here, the subject matter is purely shape and light. What great content: shape and light! How can you look at abstract elements and see the world from the perspective of these elements?  But to explain work to audiences—no. That’s selling everyone short!

When I am moved by the art of the choreography I feel my art heart weeping.

A common response your work seems to be “I’ve never seen anything like it.” What feeds your creativity?

Everything! Literature; stoop sales; overheard phone calls on the street; the structure of things; politics; taking a walk; how people behave toward each other, how they move and don’t move; even our conversation today. Really, as much as I can become aware of in any given moment and then synthesize it into what we are working on. When I am in the middle of creating a new work, my mind is a magpie and a scavenger, looking at everything as material.

Do you have a regular creative practice?

I think choreography is like playing the violin: you have to practice constantly. I feel like I’m always working, but I don’t have a studio, so it’s not regulated.

Outside of Big Dance Theater, you’ve choreographed for David Byrne, St. Vincent, Nico Muhly, and the recent David Bowie musical Lazarus, among many other projects. How do you decide whether to take on a project?

The music. If I can relate to the music from an artistic perspective, I am drawn to the project. If I personally understand and am compelled by it, have a take on it from a dance perspective that is my own, then I want to do the project.

It must be different to choreograph for people you don’t know as opposed to your own company.

Well, we share no common vocabulary or memory for sure! But I love how non-dancers dance, when they dance with intentionality. I’ve choreographed for symphony orchestras and marching bands, objects, masses of singers; I like limitations. Once I understand these limitations, I can then be generative. Exploit the negative! as Richard Foreman says.

That sounds like how you work with your company—finding common ground.

Well, in the context of Big Dance, I feel I’m pushing people hard in my group, and seeing how they respond; its exciting—like playing an intense tennis match. It’s gigantically rare and precious to be allowed the time and space to make dance, so the stakes must be high. I become disinterested when I look at work where people don’t ask very much of their performers.

It’s so difficult to explain to a non-dance lover how a piece moves or inspires you. How would you describe what you prize or value or what inspires you in a dance or theater performance?

I think it’s hard to iterate because it’s purely kinetic—you can’t logic it out; you need to go into a liminal space to experience dance. There’s even a great term for it: kinesthetic empathy. This is the physical experience of you in the audience feeling like your body is moving as the performer’s body is moving, that you soar as they leap; it’s a falling in love, in a way. Dance owns this physical empathy with the audience. But dance must also operate as an art form that has structures that are as brilliantly constructed as a great technician. When I am moved by the art of the choreography I feel my art heart weeping. This is the highest experience for me viewing dance—more than a great leap—a virtuosic structure; it has to do with the boning, the architecture in the material. And it takes just a few minutes when you’re in the audience to see what the dance maker’s contract is with the audience. Once the dancemaker lays out her stuff, it’s like, “Ok, I see what you’re up to, now let’s see what you do with it.” And you watch it unfold. I find that really suspenseful.

Before you go, we have to talk about the party, complete with ping-pong and beer, during the intermission of Short Form.

I initially envisioned the party as a piece called Intermission. It’s a piece that’s a party and the audience are the performers, but they don’t know that. Its also a device, both to create community in the theater, and as a tool to wake up the audience. After the intermission party, the audience returns to their seats, they seem very aware, listening and watching harder, because they’ve moved and talked and played. It works! 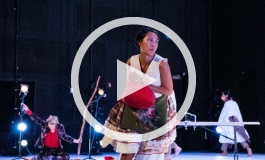