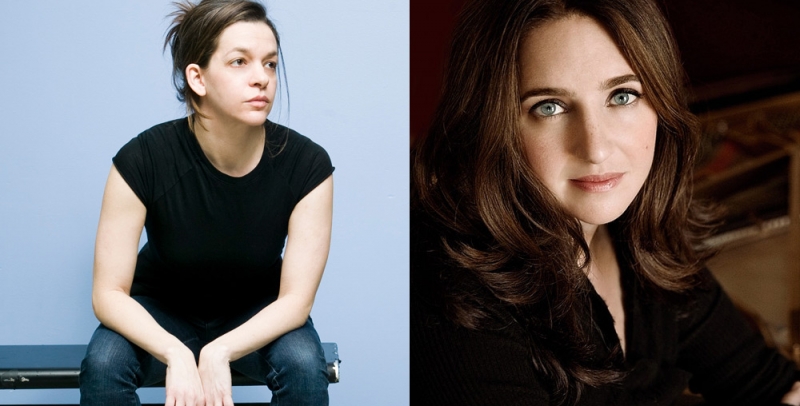 When Julliard graduate Simone Dinnerstein found herself in her 30s without the sort of bookings and prospects she’d hoped for, the pianist took matters into her own hands. Pregnant with her first child, she devoted herself to a daunting piece of music that had captivated her since her youth, Bach’s Goldberg Variations.

Notoriously demanding, the piece became the focus of a months-long spiritual quest. Dinnerstein eventually raised money from family and friends to make a recording, samples of which she sent to potential managers. She rented Carnegie Hall’s Weill Recital Hall to play the piece for those who were interested, a performance the New York Times described as having “a level of coloration beyond the palette Bach knew.” Critics took notice, recording label Telarc bit, and within a week of its commercial release in 2007, Dinnerstein’s Variations hit No. 1 on the U.S. Billboard Classical chart. It was named one of the best albums of the year by the New York Times, the Los Angeles Times, and the New Yorker.

Bessie Award–winning choreographer Pam Tanowitz has likewise distinguished herself, as a “modern choreographer much admired for the way she recharges classical steps” (New York Times). Active since 1992, she formed her company, Pam Tanowitz Dance in 2000, creating challenging, critically acclaimed dances that have been performed at Jacob’s Pillow Dance Festival, the Guggenheim Museum’s Works & Process series, Dance Theater Workshop, Baryshnikov Arts Center, and the Joyce Theater, among many others. She’s frequently compared to Merce Cunningham, for the challenging and unique physicality of her work, and Mark Morris, for its pronounced musicality.

This summer, Dinnerstein, Tanowitz, and seven dancers will occupy the ICA’s Barbara Lee Family Foundation Theater for a Summer Stages Dance @ the ICA/Boston residency July 10–15. They’ll return to the ICA to perform New Work for Goldberg Variations in December.

We spoke with Dinnerstein and Tanowitz about collaboration, risk, failure, and moving beyond the obvious.

Both of you are known for your rigor, risk-taking, and bringing fresh approaches to classical forms, but your work is very different. What drew you to one another?

SD: I thought Pam had such an interesting way of integrating live music. The dancers respond to the music, but in a non-literal way. Sometimes I’ve found that choreography can seem a bit obvious—not understanding what’s lying underneath the music, just going with the step-by-step play of each beat as opposed to other elements like line, shading, and syncopation.

PT: Thank you! It’s important to me that there’s a relationship between the dance and music that isn’t obvious.

Pam, you haven’t worked with classical music much before.

PT: I did one piece in 2011 to Schubert’s Wanderer Fantasy, but I gravitate more toward new music and living composers. This collaboration is exciting for me because I’m pushing different things in my work. I think it’s important to not always do the same – just because I like something doesn’t mean I have to do it for the rest of my life.

Pam, has working with the Goldberg Variations changed your thinking or your movement?

PT: Simone’s been playing the Goldberg Variations for 15 years. To have her in the room is great because when you’re choreographing, you have your dancers, but really you’re making all these decisions alone. Now I can say, “What do you think about this with this variation?” Or she’ll see a movement and say, “Oh, why don’t you try it with this, not this?”

SD: Pam and I met before we started working with the dancers to really talk about the structure of the piece: the canons, some of the mirrors, the mathematical concepts that Bach is exploring—the musical, more theoretical background. Something we have in common is that we both like to start with a real intellectual understanding of what we’re doing, but then we tend to be guided by our instincts. I like that it starts from knowledge, and goes toward the unknown.

PT: I wanted to learn everything I could from Simone. I was doing all this research, and then I almost wanted to forget it all, knowing that it’s in there somewhere.

SD: Pam is saving choreographing the aria until she finishes choreographing everything else, or at least that’s the plan right now. Now she’s starting to realize why that’s what she wanted to do: the aria provides the groundwork for the variations, but in order to find the aria, she had to go through the variations. I think that’s going to make the whole piece have a kind of integrity, which will be really beautiful.

Simone, you’ve been playing this piece for 15 years, and you’ve known it since you were practically a child. Are you seeing the music in new ways through this collaboration?

SD: Absolutely. Not that I was ever sick of it, but it’s really made me see it in a different way. There’s an abstract element to watching dance, so I feel the music coming to life three-dimensionally, and the shapes it’s taking are different than I would’ve thought. When I first was working on the piece, I went toward bringing out the asymmetry. It’s very, very symmetrical, but there’s an underlying asymmetry. Pam has also been bringing that out, and I realized that for maybe the past ten years or so, I’ve gradually become more symmetrical.

PT: You also played it for the Paris Opera Ballet, in a different way for them, and now you’re playing it in a different way that we’re working on together. The first day of rehearsal, you said, “I play it differently now than I did ten years ago.” It’s cool how you have been evolving and changing with all these different experiences that you’ve had with it.

Simone, in 2001 you said, “I didn’t become a musician to become a historian. I became a musician because the music speaks to me today as I am right now.” Have you changed as a person, a musician, or both since you’ve started playing the Goldberg Variations?

SD: My life has entirely changed. I learned the piece more than 15, 16 years ago when I was pregnant with my son. Everything changed by becoming a mother and then things changed again very, very much when I released my recording. The piece is really significant to me. It’s reflective and it caused changes in my life.

PT: It’s like a touchstone. You keep coming back to it changed. It becomes something else.

PT: That’s actually the question I’m asking myself as I make it. What do I have to add to this continuum of history? What do I have to add to the pot? What am I saying about this? I think it circles back to how we’re treating the music and the relationship of the structures of the dance and the music. There’s also the movement. My whole career is based on using known steps that are so-called balletic, or so-called traditional, which we perform and frame in different ways.

Pam, you wrote that one of the biggest challenges of this collaboration is grappling with the iconic achievements of, and inevitable comparisons to, Glenn Gould’s recording and Jerome Robbins’s dance production.

PT: You cannot make work in a vacuum. That’s how I feel in general about being aware of all my dance history. When I first started working on this, I said to Simone, “I cannot believe I’m doing this. Jerry Robbins!” But once I actually started working, that all fell away.

SD: And of course it’s been recorded a million times too. I had to stop listening to everything when I started learning the piece. It was so strong in my head, the way Gould played, that I never would’ve been able to play it if I kept listening to him. I had to wash it out and then react to the music itself and see what it showed me. As a classical pianist, that’s the biggest challenge: to have a genuine, authentic response to the music without thinking too much about the performance history of it.

Simone, you talked about kind of studying piece’s structure, theory, and mathematics. But when you’re playing, it almost looks like there’s no intellect in it at all. It looks channeled through you, and there’s a real physicality in how you play. That’s really interesting in terms of you working with dancers and a choreographer.

PT: I see what you’re saying. It’s amazing to have Simone in the room. The piano is in the middle of the space for the whole piece, and there’s dancing all around it, but there are also times where it’s very spare, so you can focus on Simone and that physicality that you’re talking about.

SD: I’ve always thought of music as being very physical and having a dance in it, having a lot of breath in it, and movement. When we were rehearsing recently I suddenly had this moment of realization, something I had forgotten about: I was led to the piano through dance. I took ballet when I was five. I was very serious about it and absolutely wanted to do it. There was this pianist who played in class, and I just completely fell in love with the piano from hearing her play Chopin. That’s what made me ask to play the piano.

Pam, you wrote that you wanted to create something inherently dangerous with this collaboration.

PT: Playing this piece and choreographing to this piece are both risky, and really exposing. The field that we’re in, you don’t know if something’s going to work until it’s in public. If it doesn’t work, it’s too late.

You’ve spoken publicly about a piece that you said had not worked.

PT: Yeah, I go around talking about that piece. There was a whole New York Times article about how I failed. People called me and said, “I can’t believe you admitted that. You should stand up for your piece.” I was like, “But I’m telling the truth. It didn’t work.” I set myself up for a really hard task, and that failure made me learn—I learned so much about what kind of work I wanted to keep making.

You’ll both be in residence at the ICA for a week this summer. How will you spend it?

PT: We have a lot of work to do. I have to choreograph. When I’m done, the dancers and Simone have to create a community onstage and a relationship. They’re conscious of each other and they look at each other. It all has to be integrated, besides working on the tempos and things.

Have there been any big surprises for either of you in the collaboration? Anything different from what you expected?

SD: I was very surprised that there’s not really timing.

PT: I never count… I feel like that restricts things happening.

SD: Your dancers are incredibly musical. They hear how the music is flowing and they adjust to it in different ways, which is really beautiful.

It seems like a really strenuous piece for the dancers, even mentally.

PT: Oh yeah. They’re not used to me working with music in this way. They’re musical, but it’s different, so we’re all learning, and it’s really pushing all of us.

This interview was condensed and edited.

Summer Stages Dance @ the ICA/Boston is made possible, in part, with the support of Jane Karol and Howard Cooper, David Parker, The Aliad Fund, George and Ann Colony, and Stephanie McCormick-Goodhart.