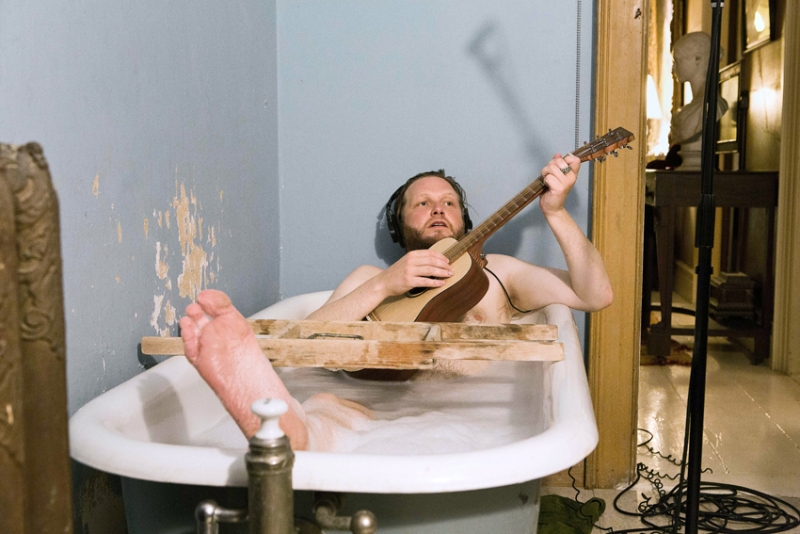 Ragnar Kjartansson: The Visitors opens at ICA/Boston on February 13

(Boston, MA—January 23, 2019) On February 13, the Institute of Contemporary Art/Boston (ICA) opens Ragnar Kjartansson: The Visitors, a monumental nine-channel sound and moving-image installation of a performance staged at Rokeby Farm, a historic 43-room estate in upstate New York. One of the best-loved works in the ICA’s permanent collection and a sentimental portrayal of friendship, love, and loss, Kjartansson’s celebrated The Visitors (2012) features the artist with some of his closest friends and fellow musicians, who occupy different rooms of the rambling and opulent estate, performing a sixty-four-minute arrangement composed by Kjartansson and Davíð Þór Jónsson. Through its unique arrangement of music in space, The Visitors creates a distinctively layered portrait of the house and its musical inhabitants. On view through July 28, 2019, this presentation is organized by Jeffrey De Blois, Assistant Curator.

Each of the nine channels shows a musician or group of musicians—including Kristín Anna and Gyða Valtýsdóttir, founding sisters of the Icelandic band Mùm; Kjartan Sveinsson, former member of Sigur Rós; and Davíð Þór Jónsson, Kjartansson’s longtime collaborator—playing instruments either alone or in groups, separately but simultaneously, occupying different rooms of the romantically dilapidated estate. As the performers leave their individual rooms, the screens turn black until, at the end, the entire group is seen on a single screen walking away from the house through a field.

The arrangement’s lyrics are taken from the poem “Feminine Ways,” written by artist Ásdís Sif Gunnarsdóttir. The title alludes to the 1981 album of the same name from Swedish pop band ABBA, the group’s last record to date, as divorce and internal strife ended their professional and personal relationships. The musical composition coheres in the work’s installation, presenting a dynamic and moving ensemble performance Kjartansson refers to as a “feminine nihilistic gospel song.”

A musician as well as an artist, Kjartansson draws on a variety of cultural sources—from American musical traditions to the landscapes of his native Iceland—to create memorable works that investigate the boundaries between reality and fiction. His videos are often humorous, placing the performer against extreme conditions. Through repetition, Kjartansson’s videos create unexpected meanings, eliciting contradictory feelings of pleasure and anxiety, humor and sincerity, sentimentality and skepticism.

Ragnar Kjartansson (b. 1976, Reykjavik, Iceland) has had solo exhibitions at the Reykjavík Art Museum, the Barbican Centre, London, the Hirshhorn Museum and Sculpture Park, Washington D.C., the Musée d’art contemporain de Montréal, the Palais de Tokyo, Paris, the New Museum, New York, the Migros Museum für Gegenwartskunst, Zurich, the Fondazione Sandretto Re Rebaudengo, Turin, the Frankfurter Kunstverein, and the BAWAG Contemporary, Vienna. Kjartansson participated in The Encyclopedic Palace at the Venice Biennale in 2013, Manifesta 10 in St. Petersburg, Russia in 2014, and he represented Iceland at the 2009 Venice Biennale. The artist is the recipient of the 2015 Artes Mundi’s Derek Williams Trust Purchase Award, and Performa’s 2011 Malcolm McLaren Award. The artist lives and works in Reykjavík.