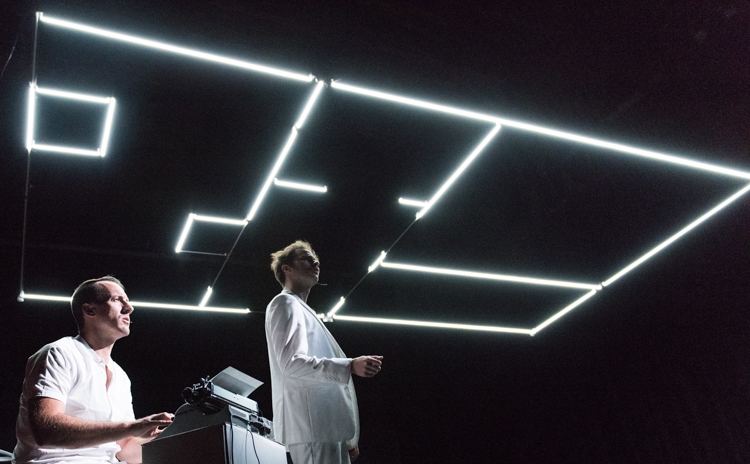 A Search for a Father, Cold War Operative, Enigma

Theater director Lars Jan describes his multimedia performance The Institute of Memory (TIMe) as a work about “how the future of remembering is changing right now,” told through the story of his father, a “Cold War operative and privacy-obsessed misanthrope.”

It was an examination of Polish theater director Tadeusz Kantor, and his “obsession with personal history, shards of memory, reams of the forgotten, the archiving of ephemera” that led American director Lars Jan to examine his own past. “The inquiry started with trying to understand what happened to my dad,” says Jan, who grew up in Cambridge and Marshfield. “Why did he become the way he was? Why was he such an enigma? Why was he so paranoid?” Jan’s explorations led him from records in Cambridge City Hall and Massachusetts General Hospital to a bunker of state-gathered surveillance in Poland called The Institute of National Memory. Along the way, Jan developed his own deep interests in ideas of privacy and of archiving, fueled by Edward Snowden’s NSA revelations and by becoming a father himself and considering how the nature of his daughter’s remembering may differ from his own.

As he learned more about his father’s experience, the work shifted from exploring his paranoia to “questioning whether paranoia’s really the right word for it,” Jan says. Born in Poland, Henryk Ryniewicz was a Polish resistance fighter during World War II who moved to Cambridge after the war to take a position at what would become Harvard’s Kennedy School of Government. Jan had little contact with him in his later life and only learned of his mental decline and death in 2009 18 months after the fact.

“My father was a teenager during World War II, he was in the Polish resistance, his grandfather was killed in the massacre around the fifth day of the war, his country was subsumed by Stalin. Basically, history was very unkind to him and he had incredible experience with being surveilled. He was also tortured in the Polish resistance, so his ability to trust other people was formed by real experiences. For him to postulate that those experiences could happen again, if those people might still be watching, that those people might still be after him…Paranoia indicates an unreasonable degree of caution or concern, but he wasn’t wrong, given his life experience.”

On visits to Poland for theater festivals and research, Jan would talk about his enigmatic father to people he met, and “what was really interesting was that as I described the little that I knew, so many people said, ‘well this is like an archetypal Polish man of the 20th century; this is somebody that we all have in our family in one way or another.’ They really recognized his deep distrust of information and guarding of his personal information, the broken post–World War II traumatic mental state, his inability to connect with others.”

They recommended Jan seek information from the Institute of National Remembrance, which he describes as “a fascinating archive that was started by the Nazis and the taken over by the Soviet Secret Police” and that is comprised “mostly of hearsay, of what the neighbor said this other guy was doing,” but also contained the “extreme surveillance apparatus that was trying to control the population.” Covering the period from 1939 to 1989, the archive is now open to journalists and historians, and Jan was able to get materials on his father through a Polish proxy, two packages of more than a hundred pages each. One covered a visit to Poland in 1958, when Ryniewicz was trailed and his contacts investigated. The second was reported from Cambridge in the late 1960s by multiple spies living there with code names.

Inspired by Kantor, whose work experimented with representing memory, Jan’s genre-bending (TIMe) considers how archiving, from bureaucratic record-keeping to personal memory preservation, has shifted from analog to digital, how “a picture from the 70s looks different from a picture from the 80s, or from the 90s,” how immersing yourself in a box of faded Polaroids under your bed is different from searching through thousands of jpegs saved on your computer. It also looks at “structures of surveillance and privacy and power as a global question.”

Bringing the work to Boston—his first performance in his hometown—feels resonant, Jan says. “Whenever I’m in Cambridge, I always go back to visit his apartment, which was on Oxford Street.” He also plans to take his daughter to see the rhinoceros sculptures at Harvard that his father would take him to play on as a boy, which feature in the design of the show, and to visit his father’s grave in the Cambridge Cemetery, unmarked.

“Even though I kept him at arm’s length and hadn’t been that exposed to him a lot of my life, I realized that the void of him, the massive space that he protected and all the secrets that he had kept around all of my family and the rest of his life was a void that actually left a very large impression on me,” Jan says. “I formed my identity in part around the contours of that void.”