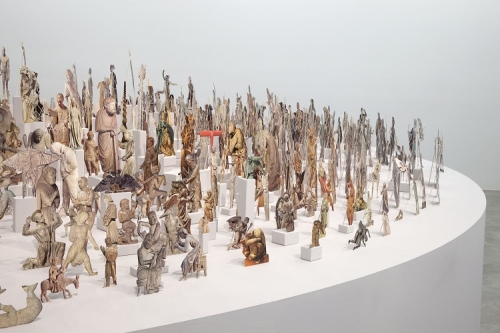 On April 13, 2016, The Institute of Contemporary Art/Boston (ICA) opens an exhibition focusing on the recent paper works of artist Geoffrey Farmer (b. 1967, Vancouver). Farmer is known for the epic scale and scope of his projects that are often developed over extended periods of time and remain in ongoing states of transformation. As part of the exhibition along with his recent paper works, a new major film work will be presented: a computer controlled montage of thousands of images rescued from a discarded clipping library. Organized by Dan Byers, Mannion Family Senior Curator, Geoffrey Farmer is on view through July 17, 2016.

In Farmer’s recent works, processions of figures assembled from fragments of book and magazine photography and illustration manifest the artist’s interest in the cross-pollination of historical and vernacular imagery. Each spectacular composition begins to chart the historical contours of our image-saturated contemporary culture, and suggest the recurring cultural themes and formal patterns. Farmer uses movement, sound, animation, puppet characters, and a panoply of highly choreographed bodies and characters to investigate world history from the different angles of its photographic and sculptural accounts.

Three large-scale works create the foundation for the exhibition. Boneyard (2013) uses photographs as a sculptural material, and it most directly addresses the relationship between photography and the history of sculpture. Boneyard is comprised of over 1,200 photographs of sculptures removed from an Italian sculptural history folio, ranging from 10 AD to the 1970s. Farmer deploys each exactingly incised figure in the round, creating unexpected historical and thematic groupings and perspectives.  The genres of Western art history, and their attendant cultural influences, march by, creating both a condensed and exploded view into the physical, material expressions of history and their photographic reproduction.

The Surgeon and the Photographer (2009-13) is comprised of 365 handmade figures, each a highly individual assemblage made from photographs and fabric. When Farmer heard that an important used bookstore in his native Vancouver would be going out of business, he bought hundreds of books from their inventory. Considering the relationship between the book, and the hand, he devised an installation of hundreds of hand puppet-like figures fabricated from the inventory of images culled from the purchased books.  Presented in clusters resembling social groupings, the figures evoke strange processions and gatherings, and the almost magical aura of photography in the 20th century.

A full-color exhibition publication, designed by graphic designer Chad Kloepfer in close collaboration with the artist, will take a non-traditional form, inspired by the assembled paper works.

About Geoffrey Farmer
Geoffrey Farmer was born in 1967 in Vancouver, Canada, where he continues to live and work.  He studied at the Emily Carr Institute of Art and Design and received a BFA from the San Francisco Art Institute. US solo exhibitions include two shows with Casey Kaplan, New York (2011, 2014), and the recent presentation of a single large scale-work, Let’s Make the Water Turn Black, at Perez Art Museum Miami (2014), (also presented at Migros Museum, Zurich; Nottingham Contemporary; and Kunstverein, Hamburg), as well as exhibitions at REDCAT in LA (2011, the first showing of Let’s Make the Water Turn Black); and Western Bridge, Seattle (2010). Farmer has had multiple solo shows in Canada; In addition to his 2015 mid-career survey How Do I Fit This Ghost In My Mouth? at the Vancouver Art Gallery, he has exhibited the Art Gallery of Ontario (2014); Mercer Union, Toronto (2013); the Banff Center, Banff (2010); National Gallery of Canada Ottawa (2009); Musee d’art contemporain de Montreal (2009) and Contemporary Art Gallery of Vancouver (2002). European Solo Exhibitions have taken place at The Barbican, London (2013); Project Arts Centre, Dublin (2011); Witte de With, Rotterdam (2008); the Tate Modern, London (2007); as well as an important contribution to dOCUMENTA (13) Kassel, Germany (2012).