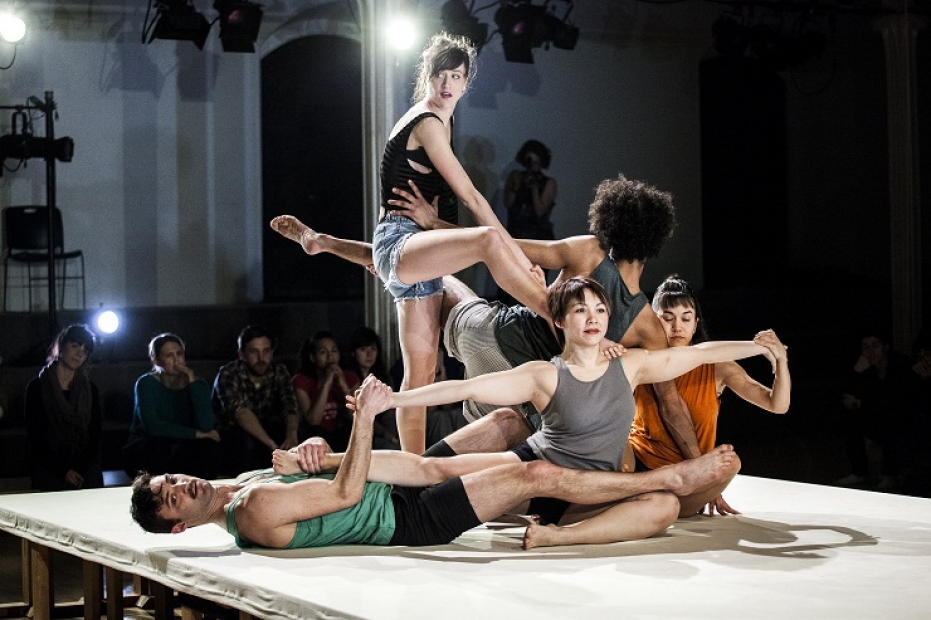 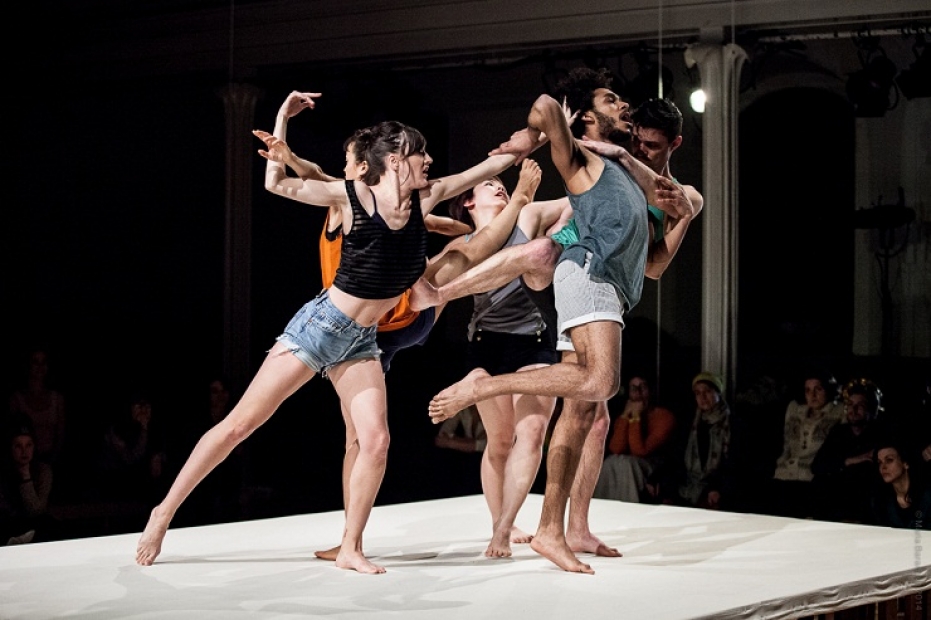 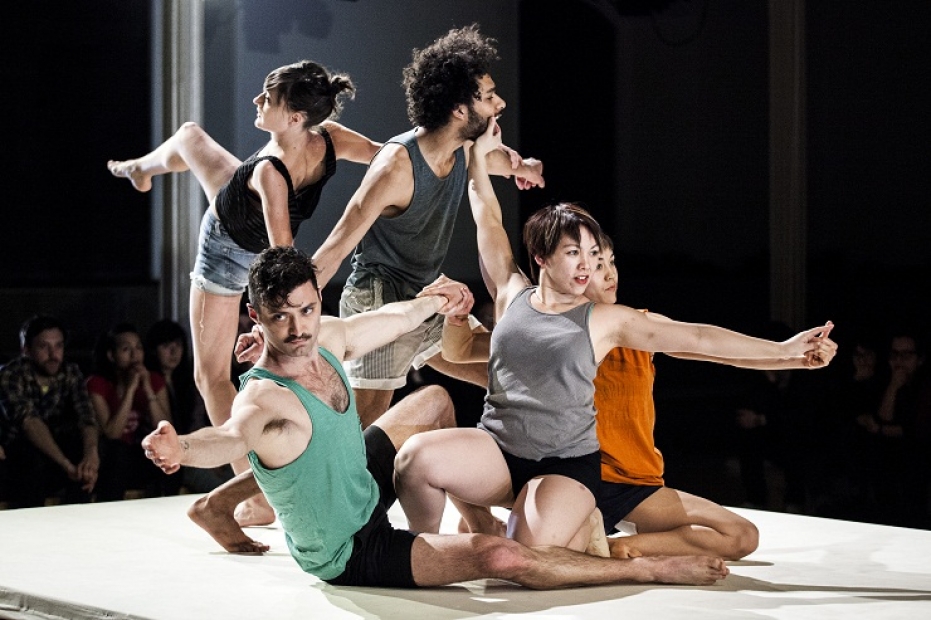 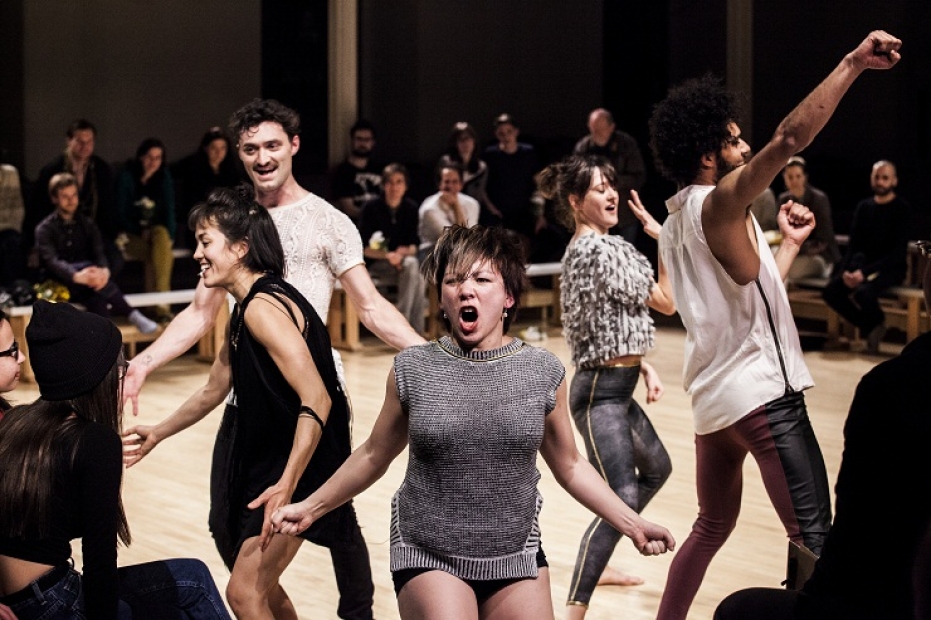 What We Build Together Is a Kind of Canopy

Wow Mom Wow (2007) spotlighted talking butts and lovers wrestling, while I sat wide-eyed in the audience on a date. In 837 Venice Boulevard (2008), we all sat on an imagined beach with Faye, perverted preteen dreaming, in a world created through the gestures of a threesome. There Is So Much Mad in Me (2010) left me feeling hurt and wounded, on the receiving end of the vibrancy of anger’s movement. You’re Me (2012) was exhausting, playful, and frantic. Watching Faye and Jesse Zaritt perform this physically demanding duet—feathers and baby powder flying—made me feel as though I could watch Faye’s choreographed faces for hours. Her expressions moved down her body, a gorgeous, evil, and maniacal worm face that melted in every inch of flesh and fabric.

Faye Driscoll’s work has been at the forefront of a shift in the genres we use to describe live or time-based arts in particular. Or rather, Faye’s work comes out of an intermedia history that never wanted neat disciplinary boundaries to begin with. While her training is in dance, she also choreographs plays, directs theatrical events, and stages sensations between word, sound, and language. Having collaborated with Young Jean Lee, Taylor Mac, and Cynthia Hopkins, among others, Faye is familiar with the bleeding out of form. Pushing on postmodern dance’s clean affective palate, she paints a tightly choreographed explosion, with herself, a gentler Lars Von Trier, in the director’s chair.

We might call Faye’s performances time-based work, body art, sculpture, contra dance, and emotional labor. Her work is contemporary performance with a linguistic foothold in dance. Faye admits others have called Thank You for Coming: Attendance “a play,” a word that rings differently than “theater.” Her practice is both collaborative and “toppy,” with dancers confidently moving one another’s bodies, like structures and building blocks, like erector sets or Legos, or something far softer. They assemble a human beanbag mountain where one body, arm, or earlobe gets stacked upon another. Holding its shape, the tower is piled to the ceiling, a pillar made only of lipstick, tinsel, and the silver blanket capes that marathon runners wear.

During a talk Faye gave in 2014 at Wesleyan University’s Center for the Arts, I wrote out a list of thoughts in response to her work in my notebook: “dishes in my sink,” “broken down buildings,” “it’s funny how you sneak virtuosity in there.” Another list might be:  Jennifer Monson, Ishmael Houston-Jones, Yvonne Rainer, Karen Finley, Reza Abdoh, Vito Acconci, Marlon Riggs, Vaginal Davis, Beverly Hills 90210, Tevas. Sculpting with the audience’s bodies, she manifests props that explode in a tightly woven hot mess. Faye’s work is aesthetically promiscuous; she pulls from a variety of media and influences, creating television on the dance floor. The audience is not incidental in her work, but neither are they called out. There is something implicit and subtle in the way her performances make you feel a mix of radical emotions.

Entering Thank You for Coming: Attendance, I take my shoes off and adorn my body with the accessories handed to me. My chest rings with the dancers’ feet pounding out a rhythm on the platform floor. My body has become a percussive site, and all my tears and belly laughs rise to the surface. Faye’s pieces form an accumulation of aesthetic prompts, and I find myself responding over time, like the stacking of muscles on a dancer’s body.

It is 2004 when I first meet Faye in San Francisco’s Delores Park, sitting in the sun. We are in our early twenties. In the winter of 2006, she stages a short film with Hedia Maron called Lez Side Story where she plays a gym teacher with neatly combed and greased hair parted in the middle. Instead of the Sharks and the Jets, the Fruits battle the Lezzies. Later on, perhaps in 2007, Faye installs a video in the bathroom of New York’s PS122 and whispers to you on the toilet: come closer. Something is made between spectator and artist, even while it is Faye’s voice that comes through again and again. So, to borrow her words, “what we build together is this kind of canopy,” a canopy under which we gather to look at the stars together, before we rage and break apart.

Katherine Brewer Ball is Visiting Assistant Professor of Performance Studies in the Theater Department at Wesleyan University, where she previously held the Andrew W. Mellon Postdoctoral Fellowship at Wesleyan’s Center for the Humanities. Brewer Ball earned her PhD in Performance Studies at New York University’s Tisch School of the Arts. Her interests include performance, visual culture, black and brown aesthetics, feminist theory, queer studies, and psychoanalysis. Brewer Ball is currently working on a book project, The Only Way Out is In: The Queer & Minoritarian Performance of Escape, and conducting research for a new project on GLBT archives, performance, rage, and refusal. In addition to teaching, Brewer Ball works as a writer and curator.