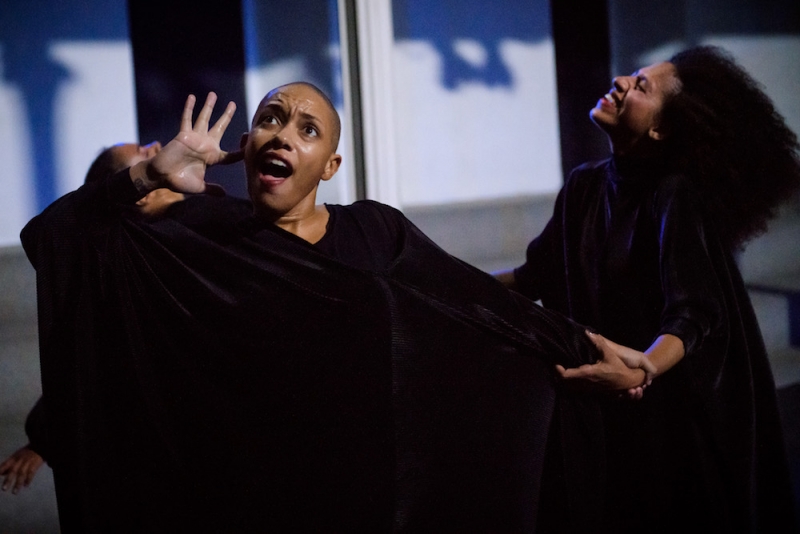 Claudia Rankine and Will Rawls: What Remains

“While “surveillance” might conjure images of security cameras, cellphones and other machines, What Remains considers less concrete, more culturally ingrained kinds of surveillance that shape and have shaped the black American experience.”

Boston-born choreographer Will Rawls returns to the ICA with poet and MacArthur Fellow Claudia Rankine with What Remains, a collaborative performance that responds to questions of presence by poetically addressing the erasure and exposure that drives the historical disturbance of black citizens.

Through movement and language, What Remains invites us across the threshold of a historical void, creating an immersive environment from the idea of an entombed imagination, and responding to violence and disappearance with a resonant, ghostly chorus.

“That’s one thing about being black in America, you have to curtail your movements, to live in such a way that what the white gaze projects upon blackness will not end your life. So you’re always thinking, can I walk at night? Can I hold Skittles in my hand? Can I have my cell phone out? If it glitters, will someone think it’s a gun? At what point can I just be?”

“Black bodies have always been under surveillance in this country—the form of police control, video surveillance, or racist legal policy that has the tireless capacity to reinvent itself from era to era. What Remains experiments with the possibility of a performance as a place of discovery and self-determination while addressing these kinds of forces.”

Claudia Rankine is the author of five collections of poetry, including Citizen: An American Lyric and Don’t Let Me Be Lonely; two plays including Provenance of Beauty: A South Bronx Travelogue; numerous video collaborations, and is the editor of several anthologies including The Racial Imaginary: Writers on Race in the Life of the Mind. Her most recent play, The White Card, premiered in February 2018 (ArtsEmerson/ American Repertory Theater). Among her numerous awards and honors, Rankine is the recipient of the Bobbitt National Prize for Poetry, the Poets & Writers’ Jackson Poetry Prize, and fellowships from the Guggenheim Foundation, the Lannan Foundation, the MacArthur Foundation, United States Artists, and the National Endowment of the Arts. She is a Chancellor of the Academy of American Poets and teaches at Yale University as the Frederick Iseman Professor of Poetry. In 2016, she co-founded The Racial Imaginary Institute (TRII). She lives in New Haven, Connecticut.

Will Rawls is a choreographer, writer and lifelong performer based in Brooklyn, NY. His practice combines dance with other media to investigate the poetics of blackness, ambiguity and abstraction. His inquiries into bodily states and humanity aim to redraw notions of power and form. Rawls has presented his work at The Chocolate Factory, MoMA PS1, Performa 15, The Whitney Museum of American Art, ImpulsTanz and Portland Institute of Contemporary Art. In addition to presenting his own performances, he collaborated with Ishmael Houston-Jones to co-curate the Danspace Project Platform 2016: Lost and Found. Focusing on the intergenerational impact of the AIDS epidemic on dancers, women and people of color, he helped organize performances, reconstructions, discussions and co-edited the catalogue, Lost and Found: Dance, New York, HIV/AIDS,Then and Now. His other writings have been published by Artforum, Triple Canopy, les presses du réel, The Museum of Modern Art, and The Hammer Museum. He is recipient of a 2017-2018 Guggenheim Fellowship, a 2017 Robert Rauschenberg Foundation Residency, the 2017 Bessie Award for Emerging Choreographer, and a 2015 Foundation for Contemporary Arts Grant. He has held teaching fellowships at Wesleyan University and Williams College and continues to lecture widely in university and festival contexts.

What Remains was commissioned, developed, and premiered by Live Arts Bard, the commissioning and residency program of The Richard B. Fisher Center for the Performing Arts at Bard College. What Remains was developed with additional commissioning support from the French Institute Alliance Française’s (FIAF) Crossing the Line Festival, the American Repertory Theater at Harvard University, Yale Repertory Theater, and Summer Stages Dance @ the ICA/Boston.

What Remains is a Summer Stages Dance @ the ICA/Boston project and is made possible, in part, with the support of Jane Karol and Howard Cooper, David Parker, The Aliad Fund, George and Ann Colony, and Stephanie and Leander McCormick-Goodhart. Additional support for Will Rawls’s residency came from the American Repertory Theater.

Review: The Body, Vibrating, Is ‘What Remains’