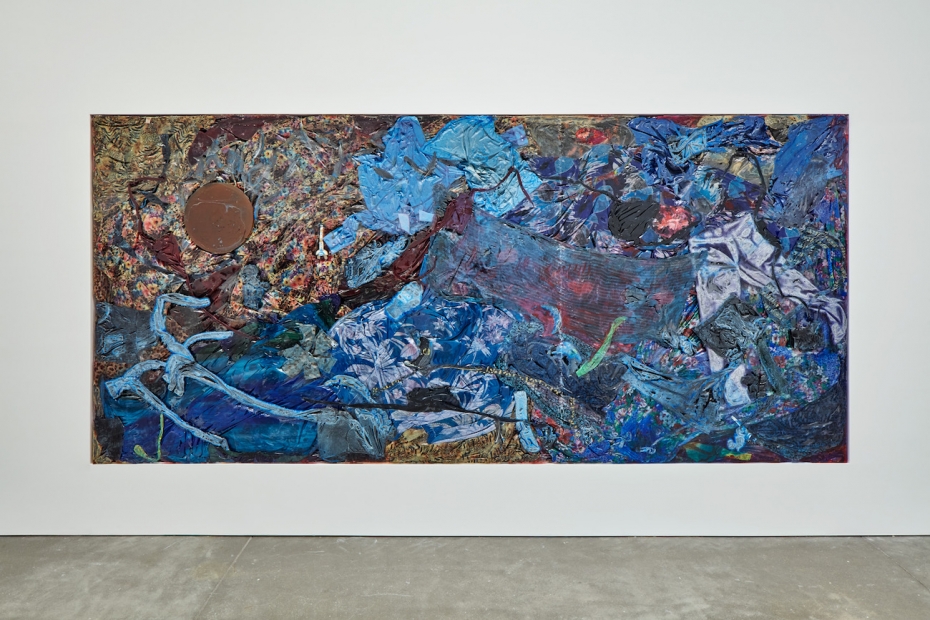 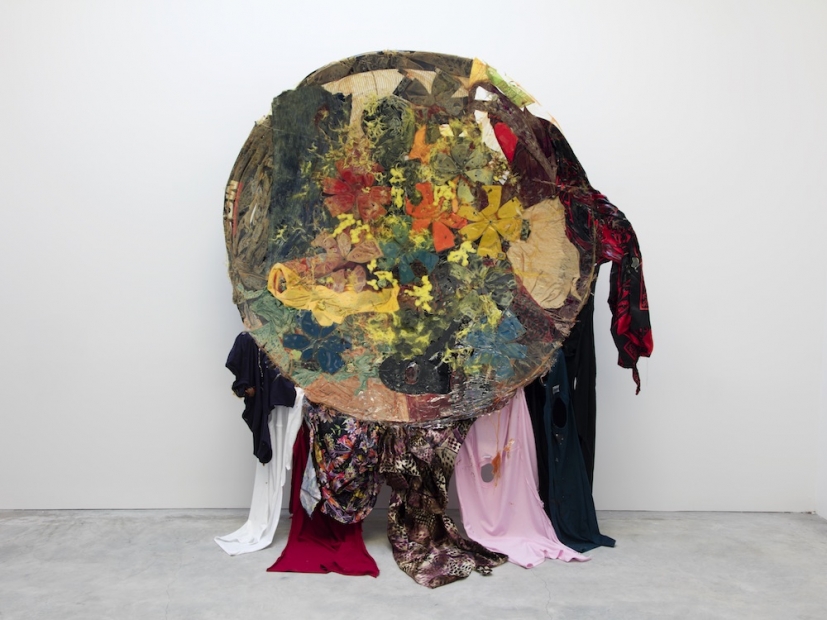 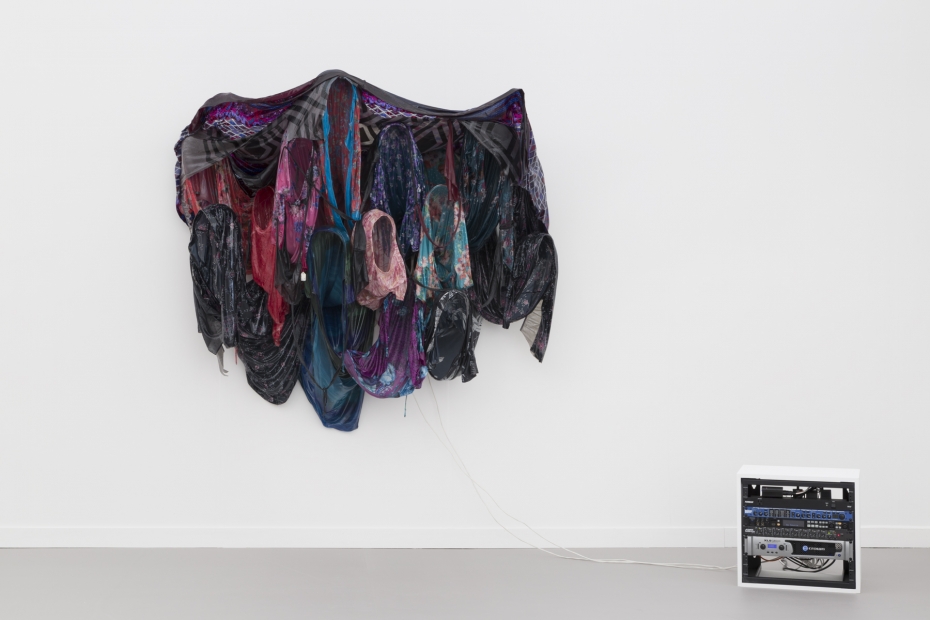 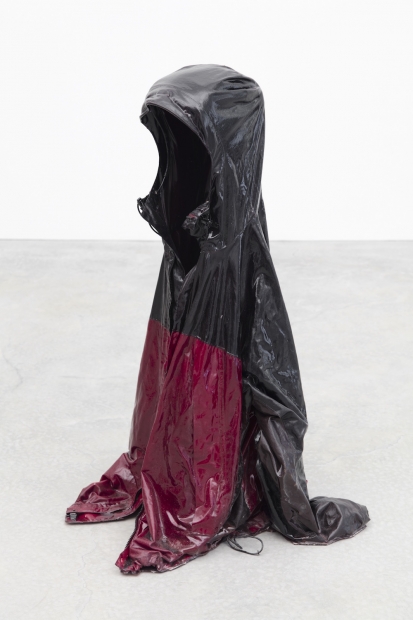 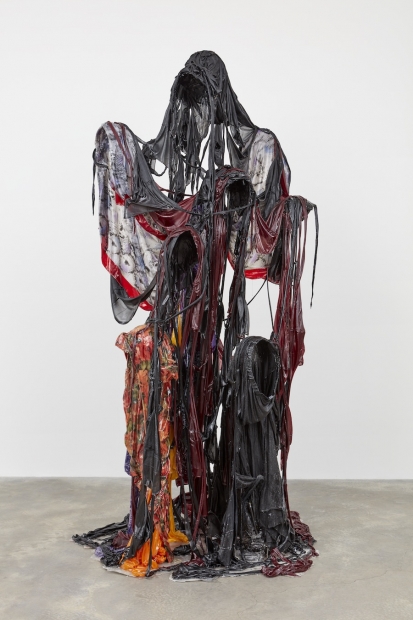 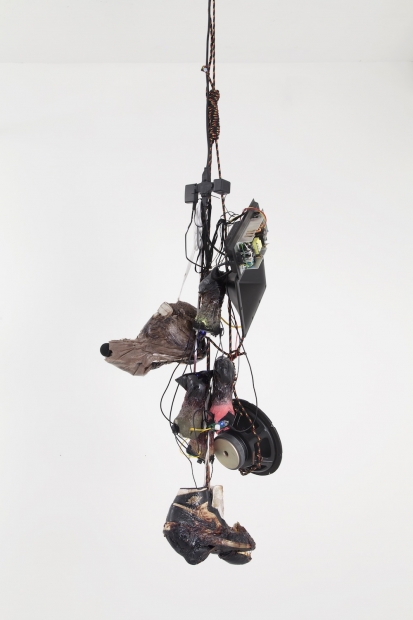 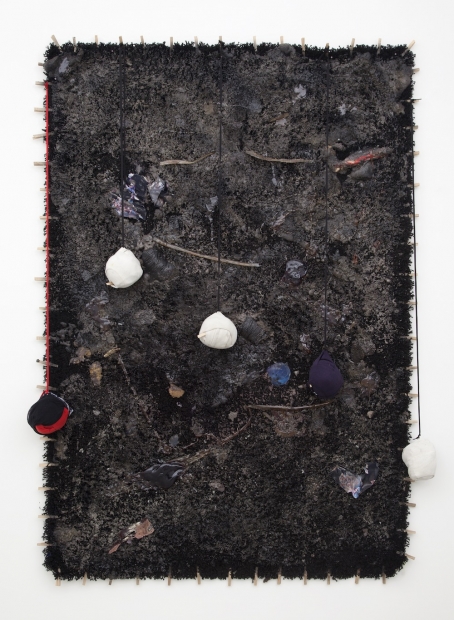 One of the most exciting artists to emerge in recent years, New York–based Kevin Beasley (b. 1985, Lynchburg, VA) uniquely combines sound and clothing—his core artistic materials—in stunning, densely packed sculptures and immersive acoustic experiences. This exhibition, his first in Boston, will present a selection of the artist’s sculptures made over the past five years.

Beasley’s early works harnessed the physical qualities of sound, deploying vibrations and echoes that penetrate the bodies of both performers and audience. He has embedded microphones and other electronic musical equipment in sculptures made of sneakers and foam, manipulating their sonic possibilities in his live performances. Found objects and clothing, often the artist’s own, are central in Beasley’s diverse sculptural work, ranging from compositions of shredded t-shirts and hoodies to fitted hats, do-rags, and basketball jerseys. More recent works are constructed from colorfully patterned housedresses stiffened with resin that stand on the floor and protrude from the walls, at times hardened over sound-baffling foam panels or concave forms that Beasley refers to as “acoustic mirrors.” Appearing like satellite dishes or clusters of ghostly figures, these works become conduits for absent bodies and histories that the artist evokes through color, pattern, and texture. Rather than contrasting the materiality of objects to the immateriality of music and performance, as is so often the case, Beasley forges strong affinities between the physical and the aural in his multidisciplinary practice.

In the spirit of artists Noah Purifoy and David Hammons, Beasley improvises upon the legacy of their work to highlight the importance of personal memory and to explore how lived experience intersects with broader examinations of power and race in America. In a recent installation at The Renaissance Society in Chicago, Your Face Is/Is Not Enough, 2016, the artist transformed police-issue riot gear into a carnivalesque installation that was activated by the breath of performers. His 2017 exhibition at Los Angeles’s Hammer Museum featured a single, large-scale installation, Chair of the Ministers of Defense, 2016, that merged imagery from a Baroque altar and an iconic photograph of Black Panther Party cofounder Huey P. Newton to consider—and reformulate—expressions of power for today. Through such multifaceted and visually commanding works, Beasley has proved himself to be among the most significant young artists working today. 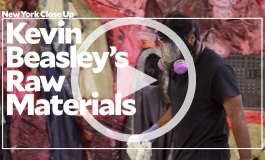 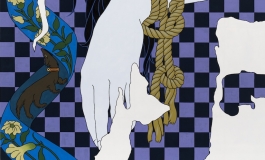 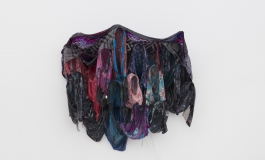