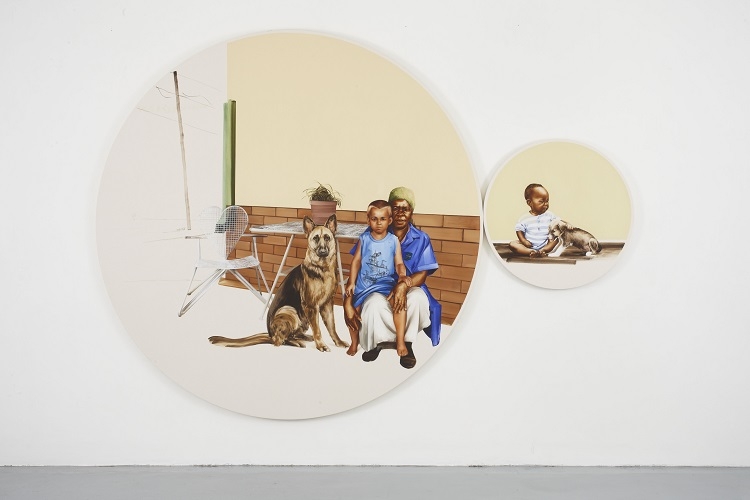 African history meets Western forms of expression in the work of Meleko Mokgosi. Working from photos and clippings from his native Botswana, the New York–based artist creates scenes that investigate Southern Africa’s past and present.

While Mokgosi references history painting, film, and philosophy to create his powerful works, the results are distinctively his. Keenly realistic depictions of people, domestic dogs, and animals native to Africa fade into more abstract settings, or even open white space. Monumental and hung in immediate, filmstrip-like succession, these images challenge common understandings of history, country, and representation.

In Democratic Intuition, Mokgosi will present a new body of work created especially for the exhibition. Divided into five sections, the works offer five different perspectives on democracy.

The series title refers to a lecture by philosopher and activist Gayatri Chakravorty Spivak, who suggests that to recognize the ability of other individuals and their children to think abstractly and take part in civic life is inherently democratic. Mokgosi is interested in the pursuit of recognition as both a primary goal of suppressed peoples and the essence of artistic expression.

Mokgosi currently lives in New York. His work has been exhibited at institutions such as the Botswana National Gallery, the Studio Museum in Harlem, and the Yerba Buena Center for the Arts. He was featured in the Armand Hammer Museum of Art and Cultural Center’s first Made in L.A. biennial in 2012, where he received the prestigious Mohn Award. This is his first solo museum exhibition.

Postcolonial Cinema in Oil on Canvas, After Canvas: Meleko Mokgosi at the ICA Boston