Combining the genres of portraiture and domestic interior, Mickalene Thomas draws on art history and popular culture to create contemporary images of black female sexuality, beauty, and power. Meticulously composed of layers of bold patterns and bright blocks of color adorned with Swarovski rhinestones, the paintings are constructed through a rigorous three-part process. Thomas begins by constructing a tableau, posing a model, and taking a photograph. She then cuts up the photograph—fragmenting, deconstructing, and recontextualizing the interior space—and reassembles the image as a collage. Finally, she reproduces the collage, at a greatly expanded scale, in acrylic, oil, and enamel.

As Thomas reorganizes the interior space surrounding the female figure, she draws inspiration from late nineteenth- and early twentieth-century artists such as Édouard Manet, Henri Matisse, Fernand Léger, and Romare Bearden—all of whom used abstraction, to one degree or another, in their representations of the world. Combining patterns and styles drawn from a 1970s aesthetic, Thomas’s compositions simultaneously recall the “black is beautiful” movement, as well as the second wave of feminism that shattered cultural assumptions about sexuality, family, the workplace, and reproductive rights. The works featured in this exhibition highlight the ways Thomas experiments with the construction of intimate interior spaces, to create a metaphor for the status of the female body—itself either present or absent—as it has been interpreted and used throughout the history of art. 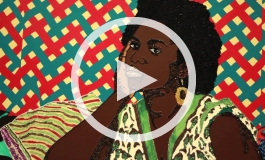 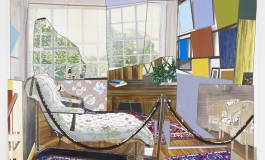