“The temporality of the videos and performances—often live, elongated, repeated, stalled, and then repeated many times over—confuses distinctions between story, character, and artwork, and plants them in the now, always to be felt in the immediacy of the present tense.”
—Dan Byers, Richard Armstrong Curator of Modern and Contemporary Art, Carnegie Museum of Art, Pittsburgh

Born in Reykjavik in 1976, Icelandic artist Ragnar Kjartansson explores the boundary between reality and fiction. Using musical sounds, lyrics, and gestures, his performances and videos play with our ideas of myth, cultural history, and identity. As Kjartansson says, “In Iceland, there is a 1,000-year history, and no proof that it existed, but there are all these stories—the poetry, the sagas. And my performance works exist mostly as stories.”

Kjartansson’s visually lush videos, combined with humorous and often sentimental soundtracks, simultaneously evoke contradictory feelings of pleasure and anxiety, humor and sincerity, sentimentality and skepticism. A musician as well as an artist, Kjartansson has based his practice in performance and theater ever since forming his band, Trabant, as a teenager.

Kjartansson’s interest in music often leads him to focus on the persona of the performer. The Man (still shown above) presents a portrait of American blues musician Pinetop Perkins playing an upright piano improbably situated in a field just outside of Austin, Texas. Born in 1919 in Belzoni, Mississippi, Perkins began playing guitar and piano during the rise of the Delta Blues.

Kjartansson’s portrait takes its place in a century-long history of reverence for and exploitation of black musicians. For this work, Kjartansson was interested in the reconciliation of Perkins’s on-stage persona with his private self. Frail and often disoriented, Perkins repeats songs and statements creating an unmediated loop, fashioning a dual portrait of an elderly man toward the end of his life, and a historically important musician, who is the keeper of a disappearing tradition.

Ragnar Kjartansson: Song is the artist’s first solo museum exhibition in the United States, and brings together a selection of video works as well as a special live performance. 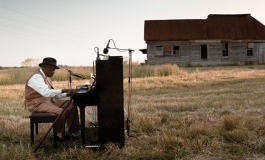